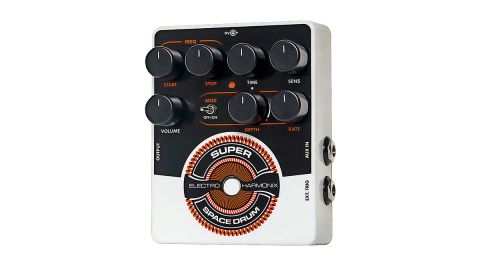 A drum synth with its unique own character.

We got a little excited when Electro-Harmonix announced both the Super Space Drum and Crash Pad analogue drum synth boxes.

As both are faithful recreations using the same analogue circuitry as the originals, we couldn't wait to get stuck into some retro-beat action, today we're looking at the Super Space Drum.

As the name suggests, SSD is perfectly at home creating more 'out there' percussive sounds. Sci-fi bleeps can be turned into more dub-like sirens.

However, with a flick of the modulation switch you can dial up some craziness with the Depth and Rate controls and there is also an Aux In, but this time the external signal is passed through the gated amplifier.

The unit features a trigger button on the front panel, which is just a switch and feels rather cheap. It doesn't lend itself to performance either - a small pad would be much better. Instead, the switches are fine for just demoing sounds as both units can be triggered externally with drum triggers or a clock generator, such as EHX's very own Clockworks.

Compared with the likes of the Korg Volca Beats, you're not getting much for your money, but it still offers bags full of character to warrant its price tag.