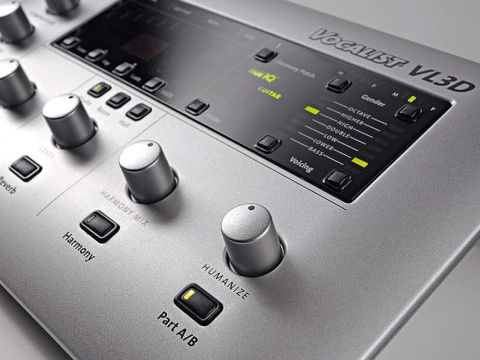 The VL3D is a no-hassle way to thicken up vocals or add harmonies that follow your playing.

The DigiTech Vocalist Live 2, was purely for processing vocals and adding two-part harmonies, triggered by guitar and intelligently following the chords played. DigiTech has now come up with the Vocalist VL3D, a desktop processor with an expanded feature set.

The VL3D's wedge shape gives easy access to the controls and clear visibility to the illuminated info panel. All the connections are neatly tucked away at the rear, as is the knob to set the input level, although it's still easily accessed from the front.

The control panel is split into switchable sections that process the vocal signal. The first section offers four knobs to tweak the sound of the voice before any pitch correction or harmonies are added. There's a noise gate, de-esser, compressor and a 'warmth' knob to add simulated valve distortion. The next section applies pitch correction to the voice - tweaking any out of tune notes to fit into a 12-note chromatic scale.

A choice of studio, room and hall reverb can also be added to the overall sound. Adding harmonies to the voice is possible courtesy of DigiTech's MusIQ Technology, which analyses the singer's voice to generate the most musically correct harmonies.

Two harmonies can be generated by playing guitar chords or, in the case of an unaccompanied singer, by using the unit's front panel buttons to set the key and scale for a particular song. For each harmony you have an easily understandable choice of bass, lower, low, double, high, higher or octave. Each can take on the natural character of the singer's voice or have its gender altered!

In addition a 'humanize' knob adjusts the perceived naturalness of the harmony voices. A 'harmony mix' knob sets the mix of lead voice and harmonies from lead voice only through to harmonies only.

The VL3D contains five programmable memories for storing your settings and each of these can contain two independent settings - Part A and Part B - selected using a front panel switch or an optional footswitch. If two harmonies isn't enough, up to four harmonies can be created in MIDI mode by inputting MIDI notes into the VL3D.

Guitarist's Simon Bradley puts the VL3D through its paces in the following clip. In each case, you'll hear the guitar and unadorned voice first:

Plug a mic into the back for singing, plug in your guitar and connect a lead from the guitar thru socket to your amp, tune the guitar using the onboard tuner then choose the vocal sound and harmony voices that you want - setting up is that simple. All that's left to do is sing while playing rhythm guitar into the VL3D and you'll find yourself musically valid harmonies that sympathetically follow the song's structure for an instantly bigger sound.

Soundwise, all of the effects that can be applied to the main voice work well - the compressor in particular giving it real presence to aid cutting through a mix. As for the generated voices, the various combinations of thirds, fifths, upper and lower octaves, and unison for a doubling effect, offer a pretty versatile range

As is generally common with this type of unit, the generated voices can sound a tad unnatural if they're too prominent, but if you sit them in the mix at a sensible level so that they complement the main vocal the effect can be quite stunning.

If you're a musician who sings and plays guitar and you want to bolster your sound with some extra voices, the VL3D will do the job nicely. For recording it will happily sit on a tabletop, the inputs handling both live vocals and guitar playing, as well as the recorded equivalent if you want to add harmonies to already recorded material.

Onstage? Just sit it on top of your amp for easy access to the front panel and add a remote footswitch. You may not have to rely on the 'pitch-challenged' bassist and drummer ever again...