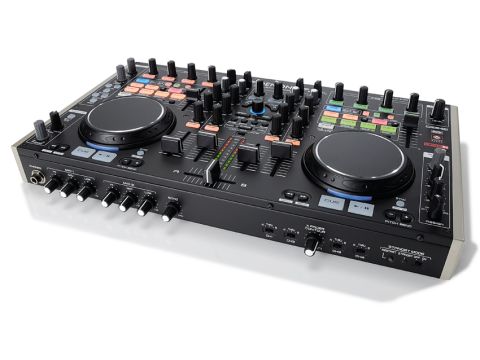 With a new Sample Deck mapping, this could become one of the most versatile on the market.

When it comes to DJ gear, Denon is a brand that's been a staple in clubs and bars for years, plus they were one of the first companies to get CDs in the DJ scene as they became the default tray-loading CDJ stalwarts.

As the rise of digital DJing continues, never the slouch, Denon has embraced the market and delivers its new Traktor-ready controller, the DN-MC6000.

With Native Instruments now building its very own hardware front-end for Traktor with the Kontrol S4, it seems Denon, like other companies, will have to work a bit harder to find a niche for its own Traktor devices.

So what does Denon have to offer? Well. The first thing that you notice when comparing this to the rest of the market is just how well built it is, with a really weighty metal construction and top quality faders, knobs and buttons. It's probably one of the most robust DJ controllers we've ever seen.

The other significant thing about the MC6000 is the sheer amount of features Denon has crammed into this unit, which has a 6U rack-mountable footprint.

There are a huge amount of audio I/O including impressive balanced XLR master outs and balanced TRS booth outs. There are inputs too - with four Phono RCA inputs meaning you can add a pair of CDJs and vinyl decks and route them through the mixer of the unit.

The balanced booth output also acts as an audio send with assignable sources. So, if you wanted to send and return an external effects unit using this, you could. Plus, this booth / send output also benefits from its own high and low EQ.

On the front of the unit you have control of three-band EQ on both of the microphone inputs, and even a built-in echo effect that makes this unit just as suitable for mobile jocks as it does for standard club DJs.

Weirdly, this front-mounted mic EQ seems to be in reverse with, from left-to-right, hi, mid and low controls - this could be annoying if, when quickly trying to roll off some low, you accidently drop the highs on your mic feed.An odd choice of design.

For four-deck control the MC6000 changes the front colour of each jog from blue to red when changing deck A to B, or deck C to D.

Setting up the unit was relatively simple, the bundled Traktor LE [ships with Virtual DJ in USA and Canada] works fine but you soon start feeling limited by the software and because of the rich amount of controls - Traktor 2 is a must to get full use of the Denon.

So after a quick upgrade to the latest version of Traktor 2, we were able to see if Denon has managed to pull off total control with this compact unit.

Loading tracks was our first annoyance. There's a separate browse button, which enables browsing mode, and then a rotary dial for browsing up and down the tracklist.

Without entering browse mode, you can push in the central rotary button and still browse the few tracks visible at the bottom of the screen, or hold shift and use the Jog wheel to scroll through tracks even faster, then load tracks by hitting Load A or Load B. Although, it works perfectly fine, it's slightly sloppy when compared to the Pioneer DDJ-T1 and NI Kontrol S4.

The familiarity of the faders, buttons and rotaries will be a pleasure to anyone that has used Denon DJ kit before and for those that haven't, the 100-year history of the company should help convince you they really know what they're doing when it comes to building rock solid hardware.

It's just a shame that third-party controllers for Native Instruments' software are at the mercy of the software changing and therefore could potentially shorten the lifespan of the MC6000 too.

It is, however, easy to forget just quite what you're getting for less than £700 - especially when you consider the competition.

The audio quality is fantastic and the I/O is extensive, with benefits of a Booth / Send output and two mic channels. Because the Denon is also a full standalone digital mixer, it will work perfectly well without laptop if you connect CDJs or a turntable - something that the Native Instruments S4 does not do.

After a while in use the Denon eventually felt comfortable and sharp to navigate, but its dual purpose nature covering Traktor and Virtual DJ software made it initially a bit confusing.

The compact rack-mount nature is both a blessing and a curse, we personally didn't have a problem with it, but friends who use the NI Kontrol S4 and the new Pioneer DDJ-T1 found it very cramped. But it's certainly a benefit if you're trying to squeeze into smaller DJ booths.

We would personally find it very hard to choose whether to go for this over the alternatives, as although the price seems fair, this is only included with a standard version of Traktor LE and most users will want the full version of Traktor 2 which to upgrade will cost an additional 129 Euros.

But, for anyone needing something ﬂexible, expandable and capable of anything from mobile DJ work, to full-blown club DJ, the Denon will take anything you can throw at it.