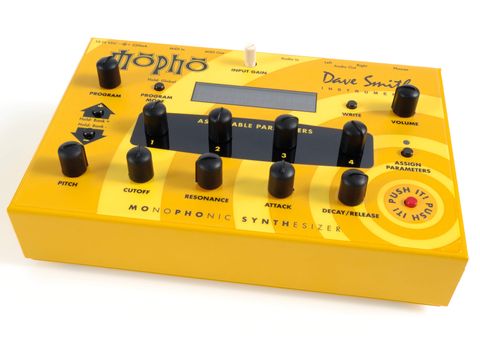 You can't get a fatter analogue synth at this price - snap one up.

The tiny yellow Mopho could be described as a single voice from Dave Smith's Prophet 08, but it doesn't end there. Luckily for us, Dave has gone and tricked out his latest creation with a little something extra.

Some critics have commented that the DCOs (Digitally Controlled Oscillators) in the Prophet 08 (and the Evolver series) haven't really got enough bass in them to create a truly weighty sound. To counter this, the Mopho is the first DSI synth to benefit from the inclusion of sub oscillators to beef up the sound.

It's hard to ignore the bright orange and yellow paint job: this is definitely a love-it-or-hate-it kind of design that's reminiscent of the Waldorf Microwave XT, with its pattern of radiating concentric circles.

It has a simple layout with two main rows of knobs in the centre and an LCD display above them. The top row of knobs can be assigned to any parameters for editing or real-time tweaking; these can be changed at any time, and the most useful combination can be stored along with a program.

The lower row is fixed to the most commonly used synth functions, namely filter cutoff, resonance and envelope attack plus a combined decay/release knob on the end.

The knobs are actually dented encoders that step through the values incrementally with a definite notch. On the upside, this makes them very accurate and it's very easy to set precise values. The downside is that it takes more than a couple of turns to sweep the filter cutoff through its entire range.

Over on the left-hand side there's a knob which sets global pitch value and above it is a pair of tiny buttons and another encoder for shuttling though the banks of presets.

The Mopho comes loaded with three banks and a total of 384 programs. These are mostly variations on the old classics such as screaming sync leads, super-wide detuned pads, analogue percussion and fat basses.

The others are a bit on the crude and crunchy side, so to get some useable new sounds, you will definitely need to get stuck into some programming.

That said, the Mopho's interface is limited and too slow for in-depth programming, so you have to download the dedicated software editor. Sound Tower (which also made the editors for the Evolver series) has done a fine job at presenting all the main synth parameters on one page, ready to tweak.

The analogue guts are the life and soul of this synth. As mentioned previously, the architecture is very similar to the Prophet 08. This consists of dual oscillators which offer saw, triangle, saw-triangle mix and square with pulse width modulation. The DCO nature keeps the pitch and tuning rock-solid, so to introduce a bit of analogue drift there is a 'Slop' control, which stays safely on the subtle (ie, usable) side.

Each oscillator has its own sub oscillator to dial in some extra fatness. Sub one is one octave below its fundamental, and Sub two sits two octaves below. These are indispensable for getting the girth into the bass end and, thanks to the nature of the DCOs, they are supremely tight and punchy and blend perfectly into the mix.

The next little trick on offer lies in the audio feedback circuit. This is similar to the old Minimoog jack lead trick whereby a little bit of the output gets mixed back into the pre-filter mix to thicken it up and add grit.

You set this with the white Audio-In knob on the top panel, and in practice, this is a bit hit and miss. There's a very fine line between nothing and overdone with a lot of sounds, but occasionally it's possible to find a sweet spot that adds a nice effect to the overall tone.

Next in the chain is the low-pass filter, with selectable two and four pole designs. If you want screaming, ripping and lazer zaps, then it's four-pole all the way. For mellower sounds the two-pole will keep things tasteful.

Modulation is in plentiful supply, with 22 sources and around 51 destinations. These include three envelopes with delay and repeat loops, four LFOs and a four-part step sequencer.

The LFOs can be free-running or clocked to MIDI for precise synchronisation. The clocked rates go from 32 steps down to 1/16th. The waveforms on offer are the quintessential saw, reverse, square and triangle shapes and LFOs can used to modulate each-others rates and amounts as standard.

About half of the Mopho's parameters can be MIDI controlled (mainly oscillator, envelope and filter functions). Surprisingly, you can't access the LFO rates or amounts directly unless you use one of the four general modulation slots.

One slightly odd thing is that the filter cutoff is controlled with two different MIDI CC numbers, which have to be set in a certain way in order to be able to sweep the entire range.

The Mopho also includes a nifty four track sequencer. Each track has 16 steps which can modulate a healthy selection of parameters which can lead to some interesting and bizarre sounding results.

Another notable inclusion is the Push It button. The mysterious little red switch kick starts the Mopho's sound engine when there's no keyboard handy; it can be programmed uniquely for each patch and has several different applications.

First off, it can trigger a specific MIDI note for the duration it is held down. This is dead handy for auditioning presets and sounds, and since any MIDI note can be specified, you can set a note in the relevant octave for bass or lead sounds to hear them in the proper context.

The alternative is the toggle mode, which holds the note until the button is pressed again. This suits drone and effect style sounds.

The magic button also works to trigger sequencer patches in the same way - invaluable for live shows where you don't want to drag along a keyboard just to trigger the Mopho.

Hear the Mopho in action:

Despite the minor MIDI grumbles, there's no denying that the Mopho has bags of charm and ass loads of bass. It sounds and behaves like a real analogue should.

The sacrifices that had to be made on the interface are compensated for by the sound quality.

If you fancy some real analogue bass on the cheap, or a truly portable synth for gigs, this is an essential purchase.