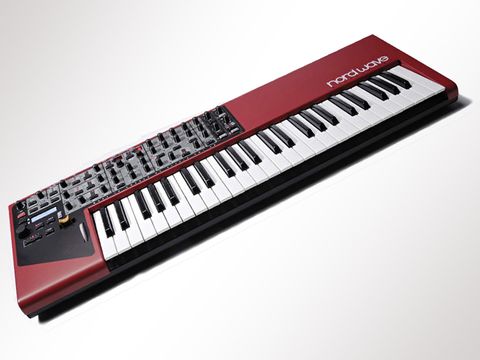 If you liked the Nord Lead you're going to love the Wave. It's more versatile and sounds fantastic.

Right from the off, the Nord Wave looks very familiar. It feels similar to the Nord Lead, from the keyboard action and solid metal case, right through to the solid-feeling dials, stone effect mod wheel and the wooden pitch lever.

Unfortunately, one of the best features of the Nord Lead 3 is gone - the LED rings round the dials showing where your settings were left. Maybe this has been done to try and keep costs down, but it was a really useful feature.

The front panel is also quite cluttered and squashed up compared to the NL3's, and many will find the Wave's interface to be a backward step.

Several features on the Wave have been taken directly from the Nord Stage. First off, it uses the same bright LCD display. Secondly, A and B panel slots have been added to deal with layers.

The Wave is duo-timbral and can have two patches simultaneously available (via its keyboard or external MIDI control) though unfortunately you can't adjust splits/ranges and have a bass up to middle C on slot A and a pad on slot B (although we hope this will be changed via an OS update in the future). You can only layer the full ranges on top of each other.

The keyboard itself has velocity and aftertouch, and is very playable with a positive, controllable action.

Selecting from the 1,024 patches is simple enough, but why Clavia has done away with the direct Patch/Page/Bank selection buttons from the Lead/Stage we're not sure.

On the top left of the front panel are the standard mono/legato and glide modes. Next up is the 'vibrato section' where you can select from three settings to delay the onset of the vibrato, assign it to aftertouch and assign pitch mod to the mod wheel.

There are also two LFOs. LFO 1 has six destinations including stereo panning and Osc modulation; LFO 2 has five without the pan option. There's also a single shot waveform available on LFO 2.

It's great that the Morph section has been brought over from the Stage series as well. This enables up to 20 destinations to be modulated at one time using the mod wheel/ control pedal, keyboard note number or note velocity. Hit the respective Morph button and turn the dial you want it assigned to - it's that easy!

The Mod envelope (also seen on the Nord Lead 3) gives an extra level of time-evolving modulation within a sound. It's essentially a simplified, assignable third A/R envelope with six possible destinations.

The Oscillator section is very similar to that on Nord Leads of old, but with much more flexibility. This is where most of the innovations have been implemented in the Wave.

There are the standard pulse, sawtooth, triangle and noise waves, which all sound authentically analogue ('noise' is currently stored under the 'misc' option). However, where the Wave really differs is with its oscillator options.

The first new option is Wavetables - there are 62 on-board. These are single-cycle sampled waves with varying harmonic content. They all sound rich and bright, yet musical.

Secondly there's the Sample Playback mode (this is only available on Osc 2). Up to 99 multisamples (depending on available memory) can be loaded in here by the user via USB. You can upload sounds from the Clavia website or upload your own with the Wave Manager software.

As the Wave uses Flash ROM, loading waves is instant. Also, Clavia is using a new type of lossless data compression in the Wave to cram as much into the small space as possible with little or no degradation to the sound.

There's also the sampled Wave upload option, which is also only available on Osc 2. This is where you can load up more user WAV samples as single cycle waveforms to use in your sounds; any type of Oscillator can be combined and layered.

Although this concept doesn't seem particularly revolutionary, it's the way it's implemented that counts. In practice, it's very simple to take any WAV file and bring it into the Wave for immediate tweakery. We've been after a synth that can do this so seamlessly for years.

There's also the usual ADSR amp envelope and a special Decay-only envelope that's activated when sample playback is selected as a waveform. In addition, the Osc mod section allows modulation of Osc 1 by Osc 2's frequency. This makes for some very interesting and twisted sound possibilities. Both FM and phase modulation are available here as options as well.

Comprehensive and deep FM synthesis is also available on the Wave (via both Osc 1 and 2) and is implemented very well considering how complex it can be to program on a DX7, for example. It sounds authentic and is almost idiot-proof.

If you combine both Oscs with FM selected then you can essentially have a four-operator FM monster under your control and use Osc mod to cross-modulate the oscillators. Plus, don't forget that this can all be routed through the versatile filter section or layered with samples and VA sounds as well. Phew!

The filter section has a standard envelope with keyboard velocity. There are six filter types, all with selectable filter slopes (LP, HP, BP, Comb, Multi and Vocal). These sound phat, smooth and are very versatile.

The Multi and Vocal filters in particular can vastly enhance your sonic palette in new and interesting ways.

Finally, there's the effects section. This features chorus (three types), tube amp, delay (Mono/Stereo/Tap tempo) several useful reverbs and 2- band EQ. The effects sound almost identical to those on the Stage and are amazingly musical and lush all round. They're also stupidly simple to use.

With the Wave, Clavia has produced a worthy and potentially classic successor to the Lead series. It sounds as good - if not better - than its predecessors but where it really stands out from ROMplers and the Nord Leads before it is in the amount of direct front-panel control over the sampled waves and their slick and simple integration into the sound creation process.

This is the beauty of the Wave. The sampled waves that are included from the factory sound superb, authentic and are very inspiring to play. From flutes, saxes, Rhodes, Wurlies, pianos and brass right through to guitars, accordions, strings, the Mellotron library and more obscure instruments - they all sound life-like with no nasty artefacts or aliasing right across the range.

If you wanted you could use the Wave purely to trigger samples on a gig or in the studio but its scope goes far beyond that.

Throw in what's already one of the best virtual analogue synthesis engines available and all in all the Wave looks like it'll have the same kind of impact as the Lead series. Yup, Clavia has done it again.

For an expanded review of the Nord Wave, check out issue 196 of Future Music (January), on sale now.