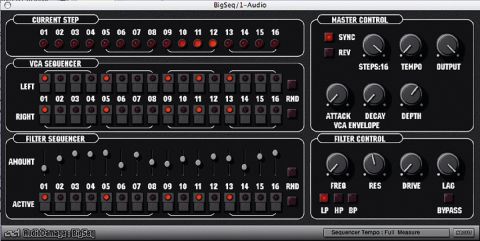 BigSeq has so many applications that you'll never tire of it. And what a price!

BigSeq is a sequencer-controlled gate and filter module built to cater for everything from subtle tremolo effects to fierce rhythmic sound-mangling, modelled on the analogue step sequencers of yesteryear.

As ever with 'The Damage', it comes in at an absurdly low price and works as a VST/AU plug-in for PC as well as both PowerPC and Intel Macs.

Due to the number of buttons on BigSeq's interface, Audio Damage have eschewed their usual cel-shaded graphics in favour of a more traditional flat design. It's a shame but clearly a necessity.

The fascia is divided up into five panels - the VCA and Filter Sequencers, Filter and Master Control sections and the Current Step display. Everything is laid out intuitively, so the manual's barely required.

The two sequencers work in tandem in that nothing reaches the Filter Sequencer unless it successfully makes it through the VCA Sequencer first. The number of steps is set for both sequencers with the Steps control, which has a range of 1-16.

The sequencer tempo can be synced to the host application or set to its own internal clock. When synced, the Tempo control is used to determine what fraction of a bar the sequencer will take to complete a full cycle.

If the Tempo's set to 2/3 Measure and Steps is set to 8, the sequencer will cover all eight steps in two-thirds of a bar before returning to 1 at the beginning of the final third. This opens up a near-limitless range of polyrhythmic possibilities.

The VCA Sequencer operates as a pair of independent gates on the left and right channels - simply click one of the step buttons to light it up and allow audio to pass through at that point in the sequence.

Attack and Decay controls enable adjustment of how long it takes each step to fade in and out, while the Depth control sets the base volume for the gated-out signal.

The filter is a 12dB/octave resonant multimode model (low-pass, high-pass and band-pass) with a cut-off range of 250Hz to 8kHz, and each step in its sequencer has an Amount slider that adds up to 5kHz to the cut-off frequency for that step.

The transition time between these frequency shifts is determined by the Lag control, which has a range of 0.001 seconds (very sudden) to 0.100 seconds (nice 'n' smooth). The filter also benefits from a brutal distortion algorithm, controlled with the Drive knob.

Both sequencers have Random buttons for instant inspiration: click one and a random number of steps in random positions will activate on that sequencer.

BigSeq is one of those plug-ins that you just want to try out on everything. The filter sounds as fat as hell, the potential for complex sequencer cross-rhythms is immense and Audio Damage's excellent MIDI learn system makes it a cinch to get hands-on with a hardware controller.

Its simplicity is definitely a selling point, but nonetheless, the ability to 'paint' steps in by dragging over them would be good, as would a stereo link button for the VCA sequencer. A few more filter slope options wouldn't go amiss too. But hey, it's $39 and absolutely qualifies as a must-have for all of us.