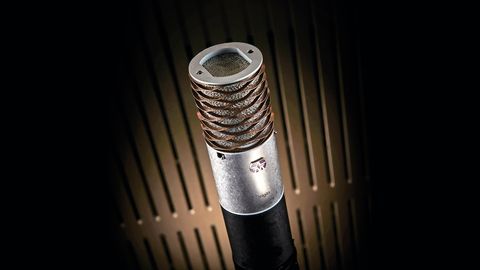 Delivers a natural and detailed sound across a wide variety of sources at a price that is hard to ignore.

The Aston Origin may be competitively priced, but it possesses a degree of originality that is uncommon in this range.

The Origin is a fixed pattern (cardioid) condenser and is the smaller of Aston's two mics: the larger Spirit is a multi-pattern condenser with an extra 10dB of pad available.

There are two switches on the stainless steel casing: 10dB pad and 80Hz low-cut filter. The XLR connection is on the underside of the mic, as is a mic stand mounting socket (5/8-inch with a 3/8-inch adaptor included).

This latter feature means there's no need for a mic clip, though this does limit angle choices to the capabilities of the stand. The wave-shaped outer spring/mesh acts as a shock absorber for the capsule, and behind it sits a stainless steel wire mesh shielding.

Though not related to its performance, it is worth noting the foam and card packaging is 100% recyclable and biodegradable - if only this was the industry standard!

The Origin has a solid, unfussy aesthetic that makes us only worry for the floor in the event of mic stand collapse. That said, this is not a particularly heavy microphone and will be happy on the end of a standard boom stand over a drum kit.

Drums are the one instrument we didn't get to try the Origin on but, considering its performance elsewhere, we would be happy using it in most drum/percussion set-ups; but that's getting ahead a little.

So, what does the Origin sound like? In short, nothing much. This is not a characterful mic, or what we think of as an additive tool; on nearly all sources the Origin is a clear and able translator.

Close up the proximity effect doesn't get boomy and misbalanced; the low-end characteristic is pleasing, rendering the source with little tonal alteration beyond the basic physics of proximity. Vocals are a clear winner here, with plenty of scope for playing the mic from close-up intimacy to a more roomy distance without losing or altering the voice.

Often cheap head-amp designs are plagued by poor self-noise performance, which becomes screamingly obvious with a quiet singer and the modern penchant for absurd compression. Again, the Origin does well with a respectably low noise floor, and one that sounds more brown noise than white, ie a cranked up, super-breathy vocal EQ won't immediately drown in hiss.

The Origin possesses a sensitivity that easily renders the detail of harmonically rich instruments, such as saxophone and acoustic guitar, with a balanced ease free from audible phase shift issues and early HF peaks (you know, that 'brittle' thing). This sensitivity is coupled with plenty of headroom before you need to reach for the pad switch to prevent distortion.

Though the sprung head design provides important shock protection for the capsule, the Origin will still require a shockmount cradle when recording bass instruments where other LF sources (feet, drums, bass amps, livestock, and so on) are present; otherwise the low-cut filter switch does what it's supposed to.

When we received the Origin for review we had no idea of the price it commanded and we assumed, mostly due to its unique appearance, that this was a more 'boutique' offering. We only found out the £199 price tag after it had been in the studio for a number of days and had been deployed alongside a range of mics.

The Origin acquitted itself well in nearly all instances (it wasn't the mic for us on a guitar amp, but we rarely find a condenser that is, no matter what the price, such is the subjectivity of sound), and we'd be happy to pop it on a mic stand in any studio where we found it.

We'd recommend sourcing a shockmount cradle that can accommodate the mic's 54mm diameter, though many situations will be fine with direct stand mounting. This a quality all-rounder of a mic and competitively priced to boot.