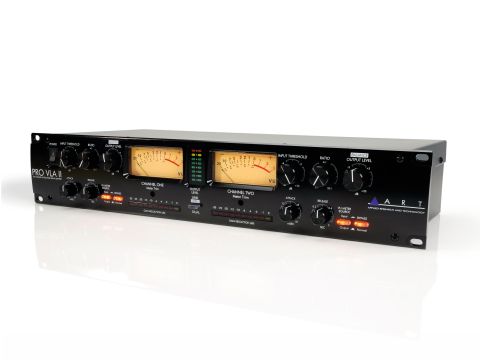 Dynamic control is rarely this good for the price. Effortless, smooth and clear sound.

The ART Pro VLA has been tucked away in the sub-£300 price bracket for many years without ever being shouted about, but a quick scan of the many user reviews of it shows how much it's loved.

ART has now given it a new shiny, gently-curved black front and expanded the metering and controls.

We've used the original model for years and often take advantage of its reliably transparent qualities for anything from drum overheads to bass DI processing to vocal tracking. So how does new version stack up in comparison?

This is a well built unit and the cosmetic changes make it feel even sturdier than its predecessor. If the reliability is in any way similar, then this is one dependable compressor (our old faithful has given faultless service for over 10 years).

At the front, the two large VU meters remain and have been enhanced with individual trimmers for calibration. These switchable meters (between input and output levels) are separated by the addition of two rows of eight LEDs for output level, thus providing peak level feedback as well as the RMS scale of the VUs.

The two horizontal rows of LEDs (10) beneath the VUs provide gain reduction metering down to -30dB, which is the unit's electronic limit. Each channel now has rotary controls for attack and release settings, whereas the old version only had a switch between Fast and Auto for each parameter.

The attack ranges from a nippy 0.25 milliseconds to a nice easy going 50 milliseconds. Release ranges from 0.15 seconds to 3 seconds. Though the original two settings worked well over many sources we always hankered for more hands-on control of the time constants, so this is a tick in the 'improvements' box.

Apart from the use of lit buttons for VU meter source and bypass switching, the only other change is that of the stereo linked output gain control. Instead of both channels having independent level controls in stereo linked operation, the channel 1 knob is assigned to overall gain while channel 2 looks after stereo balance.

Though this unit is not prone to tilted stereo images, this is nonetheless a better approach to output gain control. All the pots for the controls are now lightly stepped which we think improves threshold setting at high compression ratios as well as fine output gain trimming.

The rear connectivity remains the same as before with XLR and ¼" TRS jacks for the two inputs and outputs. Though only one of the input sockets can be used at once on either channel, both outputs can be used simultaneously, which is a neat feature for monitoring and for parallel processing uses.

As an opto-isolator controlled compressor, the ProVLA II compresses/limits most sources in a relatively transparent way.

It's capable of some very heavy compression, too, and doesn't break-up or jitter as with cheap VCA designs, but the attack and release controls become critical to prevent over-pumping of the audio.

This is not an 'effect' compressor - it doesn't impress a characteristic tonal stamp on the source material - and so is best suited to more workhorse duties.

One improvement that could be made to this unit is the inclusion of a sidechain filter to trim out low frequencies from the control circuit as it is very sensitive to bass content, which makes it less suited to mix-buss usage.

The ProVLA works best with single sound sources (instruments, vocals, drum overheads, synthesizers) and can control a dynamic pleasingly when tracking, without colouring the source.

Though there is plenty of headroom (as well as having a switchable +4dBu/-10dBv sensitivity for the I/O) and make-up gain available, the mkII is at least 6dB quieter than our old model. This may be some quirk or it may be intentional, but we prefer the higher gain operation of the original.

Unlike more expensive designs the ProVLA II doesn't exhibit the 'valve' sound in any appreciable way, and its overdriven behaviour is more solid-state or 'clean' in tonality. The upside of this is that the noise floor is very low and there is no audible harmonic distortion of the source signal.

The unit is now true-bypass so that, even when it is off, the input is passed straight to the output in bypass mode, meaning it can be left in a processing chain when not in use without having any audible effect. This is a simple yet rare addition, and a welcome one.

Overall the ProVLA II is better looking and even more robust than its predecessor with a lot of worthy additions to the metering and controls. There is no noticeable change in the sound or operational character, both of which are better than you'd expect at this price, and it remains a highly dependable audio tool.

Though we're not a fan of this compressor in the mix-buss, we would recommend it for tracking/sub-mixing usage over many more expensive models. That said, a sidechain/detector filter would really improve its range of uses.

A transparent and reliable compressor.