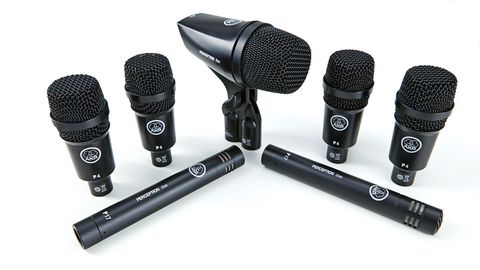 AKG has produced an excellent roadworthy set which provides much more than simply sound reinforcement. Frankly, this mic set offers more far more than the retail price might suggest.

A set of no less than seven AKG drum microphones for under £250! Has the world gone mad?

In response to the waves of Chinese-made mics hitting our European shores, Austrian microphone pioneer AKG has created a cost-effective microphone range with its Perception Series.

While these mics are in fact Chinese manufactured (under close AKG scrutiny), they are Austrian designed and bear all the hallmarks of their Austrian-made cousins. The first mic set for drums from the Perception Series Live was the Groove Pack, a six-piece microphone set.

While this represented great value for money and proved to be a real winner for AKG, it has now been superseded by this brand new seven-piece Drum Set Session 1, introduced at NAMM earlier this year.

As this selection of "high-performance drum microphones" now includes an additional mic, at a similar retail price, it potentially offers even greater value for money.

These Session 1 mics include a P2 kick and two P17 overheads. However, instead of three P4s (as in the Groove Pack), this set has an additional P4 microphone offering increased kit coverage and better value too.

Also included with the set are mic clips for the P17s and H440 drum rim adaptors for the P4s. The set comes with its own briefcase-style box complete with foam cuts-outs to help keep the mics safe, snug and secure for transportation.

Designed specifically for the kick, the P2 is a dynamic microphone and, like all the Performance Live series mics here, has a cardioid polar pattern. Again in common with the others in the set, it is finished in a satin black.

This chunky P2 has a roadworthy, robust appearance, reaffirmed by the solid metal casing and thick steel mesh grill, which is more than adequate to protect the large capsule hidden beneath.

Attached to the lower section of the mic body is a dual socket adaptor with an XLR socket to one side and the threaded portion for a mic stand to the other. Oddly this plastic mount is fitted with a threaded 3/8" metal insert, rather than a fixed dual 3/8" or 5/8", as on the P17 microphone adaptors.

Should it be necessary for this insert to be removed for a 5/8" threaded mic stand, for example, it could be prone to cross-thread damage - especially when considering this mic weighs some 400g.

Next out of the aluminium reinforced case is a pair of P17 condensers for use as overheads. Like all electrolytic condensers, they need a power source - in this case from an external supply such as from a mixer with Phantom power.

While these 'pencil' thin mics have the same specification as the now discontinued P170s, the P17s are not available as a separate purchase. They weigh nowhere near as much as the P2, but they feel equally as solid with their metal casings.

On the mic body is a switchable -20dB pad which basically increases the headroom of the microphone by another 20dB. The four P4s (snare/toms) are dynamic microphones featuring integral stand mounts which, as mentioned previously, are fitted with the dual 3/8" or 5/8" mounts. These are also robust-looking mics that may be used on any conventional mic stand, and AKG have supplied the H440 drum rim adaptors for each of these mics.

Though primarily aimed at the gigging drummer for use on stage and for home recording, the microphones are equally suited for other musical applications too. These include, for example, the P17 for stringed instruments; the P2 could be used on the double bass, bass amp or large brass, and the P4s for smaller, less-beefy brass and guitar amps.

The design of the H440 adaptors allows quick attachment of those P4s onto each rim. Our test snare has a die-cast hoop, while the toms are fitted with triple-flanged hoops - during the tests, whichever rim type, the clips held the mics in their position (even when on the lower rim of the snare), while also allowing some degree of anti-vibration too. Nice.

The P17s give the drums an immediately impressive sound, while also providing a good stereo image of the kit. Isolating these in the mix shows they do a pretty good job of picking up the toms and snare but, though providing some surprising substance with their full dynamic range, its not until the P4s are brought into the mix that we have a much more robust tom sound.

With a little tweaking of the top end, we gain the pin-sharp sparkling nuances which hail freely from the hi-hat (now giving the PA horns a run for their money), and a nice crispy 'zing' from the crashes and ride.

This is complemented by the gutsy bottom end from the P2 kick mic, packing a punch and showing no signs of being overloaded by my size-11s striking a double-pedal onslaught.

Nestling in between the highs of the cymbals and the lows of the kick are the P4s which respond impressively in equal measures, upon the snare and the toms.

Working well in conjunction with the P17s, we capture the full dynamic range from the whole kit - from the slightest touch on a cymbal to the initial crack of the snare, the strike on each tom, down to the lower frequencies with a thumping 16" floor tom and punchy kick - impressive.