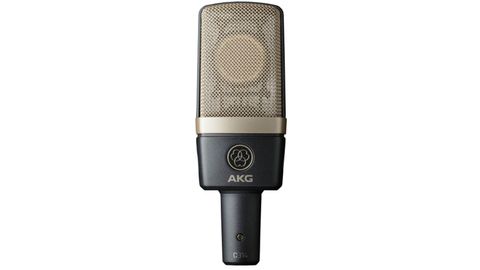 Four polar patterns make it a solid studio workhorse that will lend itself to a variety of recording tasks.

A multiple-pattern large-diaphragm condenser mic is pretty much an essential item for a busy studio, with a stereo pair being even better.

The C314 is AKG's latest such mic and is available singly or in a stereo pair for £1,319 - factory-matched from thousands of individual microphones by a computer-aided matching method.

In AKG's roster the C314 falls between the single capsule C214, the top-selling recording microphone in the USA, and the long-established dual capsule multi-pattern C414 models, coming in at over £200 less than the C414 XLS with which it shares the same gold-plated membrane.

Whereas the 414 models have nine selectable pickup patterns, the C314 keeps that to a neat four - Cardioid, Supercardioid, Omnidirectional and Figure of 8.

The C314 comes in a smart foam-lined aluminium carrying case that also includes its accessories - a standard mic clip, a plastic suspension cradle and a foam windshield.

The stylish-looking microphone itself seems constructed to AKG's usual high standard with a double-mesh, all-metal black grille on the back side and a lighter coloured silver/bronze one at the front. AKG says that integrated capsule suspension reduces mechanical noise and resonances.

The four polar patterns are selected by an easily-operated switch inset below the black grille - a lot less fiddly than the rotary-style switching on a 414.

At one side of the body you 'll find the pad switch offering 20dB of attenuation, while the bass-cut filter resides on the other side bringing in a filter slope of 12dB/octave at a cut-off frequency of 100Hz.

Below the pad switch there's an overload LED, normally green when the mic is powered, but turning an easily-seen red for one to five seconds when reaching or exceeding around 2dB below the admissible headroom.

When the mic is used with a standard mic clip, the switches are easy to reach, but getting at them is a little more fiddly when it is in its cradle. However, as the cradle has a one-click quick release collar, it's easy enough to quickly lift the mic up by a couple of inches if you need to tweak anything.

Plugging in the mic for use, it became apparent that it was quiet, with low self-noise. Recording a variety of sound sources, good results were obtained across the board.

A male voice recorded with a standard cardioid pattern came across as crisp and detailed with no obvious anomalies in the frequency range. The mic gave the impression of being pretty neutral sounding with a slight lift in the top-end with a peak around the 10kHz mark.

Switching to Figure of 8 mode for a vocalist each side of the mic also worked well, with the expected rejection of sound from the sides. Back in cardioid mode, the mic was used close in on steel string acoustic guitar, capturing the picking and strumming with clarity, and also yielded accurate and detailed recordings on hand-held percussion.

With an electric guitar amp, it performed admirably close in on the speaker and also captured the ambient sound in the room with consummate ease on an omni setting.

While we didn't get the chance to do an A/B test so can't comment on any differences in the sound, it's quite obvious that a C314 is a mic that could take on the tasks that a C414 has been traditionally used for.

What you are buying into with a multi-pattern condenser or, even better, a matched pair of them, is versatility for your studio; and, with current UK prices of £799 for the C414-XLS and £949 for the C414-XLII, the C314 is a more affordable alternative for providing that versatility.