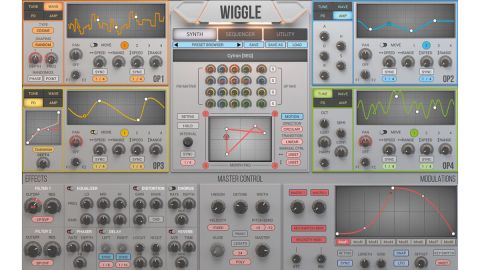 A truly remarkable synth bursting with life and movement. We can't find fault with the instrument, but it does need more presets!

Although conceptually complicated, Wiggle's architecture and layout are straightforward, with one page housing all synthesis parameters, and two further pages playing host to the Sequencer and Utility sections.

The nifty Key-Switch Modulation system lets you assign two modulators to a target and switch between them with MIDI note input, and further real- time manipulation can be actioned via the snapshot-based Morph Pad, which we'll come back to shortly.

Meanwhile, on the Sequencer page are eight programmable Sequence Modulators; and rounding the core synthesis engine off is the main Sequencer, which does double duty as an arpeggiator.

It all appears to be pretty conventional, but it's in the details that Wiggle sets itself apart. For starters, each of the four operators includes two mix-blendable waveforms, sourced from a set of fixed and 'movable' options, the latter shaped using four editable breakpoints. The fixed shapes are sine, saw, triangle and noise, and four starting point shapes are provided (linear, square, cosine and cubic) for the movables.

They're called 'movable' because each of the four editable breakpoints defining the waveform can be modulated horizontally and vertically by its own LFO - this is also where the 'dynamic waveshaping' description comes from.

That's not the only way in which the oscillators can be modified at source, either. One of eight Shaping waveforms can be applied to each, as can Phase Distortion with one of three waveshapes (sine, cosine and a customisable wave). And with individual ADHSR and tuning options built right into the oscillators, much of Wiggle's sound, including dynamic movement, can be determined within the sound generators themselves.

As mentioned, all four sound generators pass through the FM Matrix, where they can be set to modulate each other or themselves, with each FM knob level controlling the modulation amount. Knobs are also colour-coded (in FM terminology, the left colour indicates the modulator and right colour the carrier).

For true FM-style synthesis, you can of course use Operators solely as modulators, setting their mix output level to zero. Obviously, the Matrix can bring considerable complexity to the sound - the tuning and amplitude settings for each Operator are key to the outcome.

In Wiggle, LFOs and Envelopes are programmed in the same editor - simply switch to LFO mode and your designed envelope loops like an LFO. It's slightly unconventional but in practice makes perfect sense - a set of LFO presets would be welcome, though.

Then there's the Morph Pad. This not only provides four snapshots of the synth settings for morphing between, but also includes a means to automate the movement of that morphing. Called Motion, it's not only an awesome feature but a doddle to set up, and once you've drawn your morphing path on the pad, you can select how the morph follows it (Forwards, Backwards, Circular, etc).

Wiggle is loaded with clever features, then, but how does it sound? Well, working movement, shaping and phase distortion into the Operators makes for some pretty edgy sounds, as ably demonstrated by the preset library. At just over 200 of them, it's not the biggest patch bank we've ever seen, but what is lacks in quantity it makes up for in quality.

Among the lead sounds, we particularly like the morphing of Non Ducor Duco, the rhythmic style of Aftermath and the bending feel of Old Tape Glide. In the Keys category, the short, snappy Plastica and organ-like Remembrance stand out, while from the Poly set, the twangy Forbidden City caught our ear.

There are also a handful of cool percussive sounds (Neo's Clock, for example) and some great morphing pads (ElectriCity, Northern and Redemption). Many of our favourite patches, however, are found in the sequenced category (the arpeggiated Little Phat Arp and sequenced Edge of Yesterday, and filtered Neuro Chasing, to name three).

Wiggle's powerful dynamic capabilities mean that no sound is ever really static (unless you want it to be, of course), and this is epitomised by the Stone Mason preset, where a simple snappy sound (with no movement in the oscillators themselves) is imbued with ongoing movement simply by using the Morph Pad.

For any new synth, presets are important, and Wiggle's 200-odd need expanding with some run-of-the-mill sounds to complement the creative patches, deliver a more balanced soundset and simply provide more choice.

That aside, we have no real gripes with the instrument itself, which effortlessly finds its niche among the new wave of super-flexible, super-efficient high-end soft synths. For a debut release, Wiggle is astonishingly accomplished.