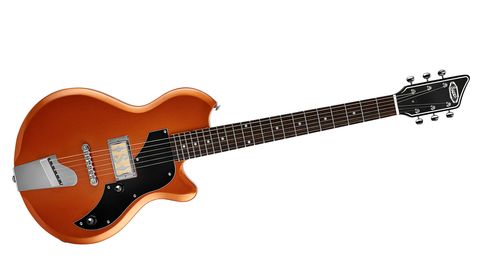 With a raft of designs from the past to draw on, we suspect Supro is back for the long haul. We certainly hope so - we haven’t had as much fun as this for ages!

While Valco’s backstory is complex, and its roots lie in the National and Dobro companies back in the 1930s, it is the start of the 50s - 1952, to be precise  - that interests us here. This is when Valco entered the solidbody electric guitar market and where, over the next decade and a half, it would create some of the most out-there and often innovative designs ever plugged into an amplifier.

To kick off 2017, then, Supro guitars are back, relaunched in two ranges: the modernised solidbody Island series of three guitars, and the more expansive 10-strong semi-hollow Americana series, modelled directly after probably the most famous, if originally short-lived, of Valco’s designs – the Res-O-Glas models. Today, we’re running the rule over the Jamesport.

The Indonesian-made Island series is straightforward with three models, all named after Long Island locations that are close to Absara Audio’s HQ in Port Jefferson, New York. They come in various colours and single- (Jamesport), double- (Westbury) and triple-pickup (Hampton) configurations. Their construction is identical, aside from a different pickup switch on the Westbury and the triple-pickup Hampton (three-way toggle and five-way lever respectively), and block fingerboard inlays compared with the dot inlays of the Jamesport.

Based on an early 60s Spur Ozark with its well-known and distinctive single-cut outline, the Island models are certainly sharply made, although the opaque colours completely hide the 41mm deep alder slab body with its chamfered edges. The maple neck isn’t bolted to the body - as the wood combination and its Fender scale length would suggest - but is, in fact, glued in. That said, the full width of the neck slots into the body, which has a round-nosed comfortable heel. It’s more like a bolt-on joint, but without the screws.

It might seem a pretty simple build, but the Jamesport has a few inherent tricks, one of which is the ‘wave’ tailpiece, “pulled from a 1962 National Westport guitar”, says Absara Audio’s main man, David Koltai.

It features a chromed metal plate, secured on the rim only by the base strap button, and two smaller cross-head screws that simply sit above the face of the body. Screwed to that is a slightly offset aluminium anchor block, with nicely rounded edges. This block is sited further back than the standard stud tailpiece that usually accompanies the ubiquitous tune-o-matic bridge.

The nut is Corian and nicely shaped, while the vintage-style single tuners certainly look the part and have a smooth enough, positive feel. It’s not rocket science, but it’s good guitar-making.

The second plus here is the placement of the single pickup, just a little south of a middle position, rather than directly in front of the bridge. And then there’s the actual Supro Gold Foil single-coil pickup itself that is humbucker-sized (handy if you want to retrofit something else) and mounted via a chromed ring to the body.

The simple electronics mount to the three-ply scratchplate - which, here, is just a single 250kohm volume placed very close to the pickup and a 500k tone on the lower tip. Only the upper bass-side edge of the scratchplate looks a little unfinished and square edged, although, of course, on the other designs it’s cut away to surround the neck pickup. The side-mounted output jack sits on a neat chromed metal football plate: it really is a tidy job with a very working guitar feel about it.

Both Island series guitars (Jamesport and Westbury) are nicely weighted and are pretty Les Paul-like in size with a very conventional, familiar feel, seated or strapped on. The neck, too, isn’t taking any chances, recalling a more vintage-y clubby feel, but with more mainstream depth.

The satin neck back (which appears to simply be the gloss finish cut back with abrasive paper and wire wool) feels super-smooth and will no doubt return to a pretty burnished glossy feel with playing. Another nice touch.

A quick unplugged strum reveals a long and quite smooth sustain on the Island series guitars.

Despite a 9.16kohm DC reading from the Jamesport’s pickup - this is a single coil, remember - our amp stays clean and we’re met with a bright but not over-spiky single-coil voice that is less in your face, less direct-sounding or strident than any Fender references we listened to. Jangle it does and we’re reminded more of a Danelectro voice, although here it’s bigger: spiky yet smooth. There’s a really nice taper to the volume and tone knobs on the Island series’ controls.

The Island series models have a contemporary feel about them and are slightly sharper in fine details (the fret-dressing, for example), in comparison to the Americanas, but we’re splitting hairs.

Besides, Valco’s original guitars were never a head purchase, were they? They were about the heart, and these have both character and vibe in spades, not least in the sound department - a voice that, if not forgotten, is certainly overlooked, and extremely valid for the player looking back to the 60s to create different and new sounds.