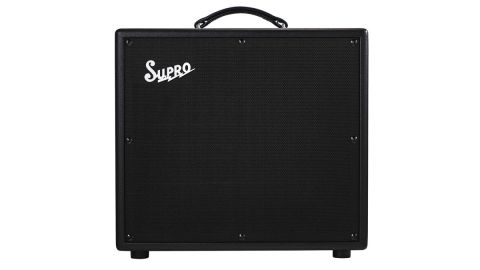 A USA amplifier built to a very high standard.

As one of the world’s oldest music brands, Supro’s heritage goes all the way back to the very beginning of electric guitar and a good few decades before the transistor was mass-produced.

In the 1950s, Supro’s inexpensive amps were used by a number of Chicago bluesmen, giving them an association that interested many of classic rock’s pioneers, most notably Jimmy Page, whose reputed use of a Supro on early Led Zep tracks did much to sustain the brand’s reputation after production stopped. Now, back and reinvigorated in the capable hands of Pigtronix pedal supremos Absara Audio, Supro’s catalogue blends modern designs with tributes to past glories. This issue we’re looking at an all-new model with more than a few boutique twists: the Galaxy.

With its two-channel all-valve design, the Galaxy’s overdrive channel is the result of a collaboration between Absara’s David Koltai and long-time Supro enthusiast Bruce Zinky, who was Fender’s Custom Shop guru in the early 90s, with credits including the multi award-winning Vibro-King, Tone Master and Prosonic... to name just a few. Meanwhile, the clean channel is derived from Supro’s Keeley Custom model - another collaboration, this time with effects pedal wizards Keeley Electronics.

Visually, the Galaxy is a smart if somewhat understated amp, with an almost square ply cabinet, smartly covered in black vinyl with a suede-textured black vinyl stripe bordered by black piping. The traditionally styled control panel features volume and tone controls for the clean channel, with gain, volume, bass mid and treble knobs for the overdrive channel and a global reverb level control. There are toggle switches to change channels and operate a boost function that works on both channels.

On the rear panel, more features include a valve-powered effects loop with a defeat switch, and a Channel Assign switch for the Galaxy’s valve-powered spring reverb. There’s a Dwell control governing the level sent from the overdrive channel to the reverb circuit, and a comprehensive selection of speaker output jacks, together with remote footswitch jacks for channel, boost, reverb and loop in/out functions.

In combo format, the Galaxy’s chassis is loaded from the top so the lettering is the right way up from behind the amp, rather than in front. Inside the chassis, the electronics are typical of what we’ve come to expect from a modern Supro, with one large high-quality PCB holding most of the small components, including the front panel controls and all the valve sockets. A smaller board contains most of the rear panel sockets and switches, apart from speaker outlets. With more components than usual, there’s a fair bit of wiring, which is all neatly tied and properly twisted to reduce hum. Meanwhile, metal film resistors used throughout the circuit help to keep hiss levels down.

The Galaxy’s output power comes from a pair of 6L6GC valves developing around 50 watts in push pull, while the preamp features four 12AX7s and one 12AT7, together with an often overlooked but very useful 12DW7. Half a 12AX7 and half a 12AU7, with a gain factor of 100 and 20 in the same bottle, the 12DW7/ECC832 is used in the Galaxy’s reverb recovery and effects loop mix section. The Galaxy exudes plenty of vintage Supro mojo, blended with tank-like build quality to handle non-stop touring.

The Galaxy switches on quietly with no hum and only a little hiss. First stop is the clean channel, where deceptively simple controls hide a wide range of colours, with stacks of headroom and a clever tone control that boosts bass and cuts treble in one direction and does the reverse in the other. The footswitchable boost fattens things up a lot, adding a spanky ‘Blackface’-flavoured edge with a fast attack that’s perfect for country and blues with a Tele or Strat. As you might expect from an association with Robert Keeley, the Galaxy’s clean channel is also great when used with effects, especially when the footswitchable loop is brought into play. The combination of high headroom and a big, powerful loudspeaker make the Galaxy’s cleans really punch through when needed.

The overdrive channel’s multiple cascaded gain stages cover a wide range of aggressive ‘tweed’-inspired lead tones, enhanced by the strongly British-voiced Eminence CV-75 Redcoat loudspeaker. We love this channel’s dynamic response: at bedroom levels it’s a little too fierce, but push it up to proper gig volume where that superb Eminence speaker can breathe and the Galaxy really sings, with touch-sensitive harmonics that shift in colour as you pick harder or softer.

The valve-powered spring reverb adds a smooth halo of ambience at lower settings, shifting to authentic surf warbling with the level turned up. There’s a reverb Dwell control for the overdrive channel on the rear panel, so you can have different effect levels on each channel. As long as you keep the overall reverb setting down to sensible levels it works well, adding subtle ambience to rhythm parts, with a deeper and richer delay for solos.

No question about it, the Galaxy packs a lot of flexibility into a compact 1x12 enclosure; the footswitchable boost, channel-assignable reverb and effects loop make it a versatile tool for all kinds of players. The clean channel’s massive headroom is ideal for amplifying pedals, while the overdrive channel sounds equally authentic in vintage and modern settings. You have to turn it up to get valves and speaker working properly, though, so perhaps this amp isn’t the best solution for bedroom heroes.

Aimed at professionals and well-heeled amateurs who cover a wide range of musical genres, the Galaxy’s price tag means it’s far from being an impulse purchase. However, this is a USA amplifier built to a very high standard. It stands up well compared to similar products from other boutique builders, so we think there’s plenty of bang for your buck.

One small disappointment is the lack of a proper foot controller; the Galaxy has four footswitchable features but comes with one single-button switch. This minor annoyance aside, whatever your sonic needs are, we think you’ll find the Supro Galaxy probably has them covered.