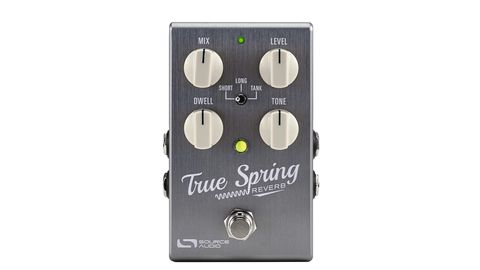 Although this pedal is perfect for surf instrumentals and Spaghetti Western/spy movie soundtracks, the True Spring goes beyond genres to provide a spring reverb and tremolo experience that adds vintage flavour to any amp.

Fender amps from the early 1960s are objects of desire for many, not just for that Fender amp sound but also for their in-built spring reverb and tremolo.

At the time, players using these amps were getting the state of the art: basically, a fully formed amp and effects system long before pedalboards were even imagined.

Now, while new amps with built-in spring reverb and, to a lesser extent, tremolo, are still available, those players with amps that aren’t so equipped need to take a different approach if they’re looking to cop some of those older sounds - namely by using reverb pedals.

Strymon took on the ‘reverb and tremolo in one pedal’ challenge with its Flint, which offered spring, plate and hall reverbs and three tremolo types. And now Source Audio has come along with the True Spring, which, arguably, digs deeper into the vintage vibe by offering three tremolo types alongside three distinct variations on spring reverb.

While the pedal’s hidden depths can be explored via Source Audio’s Neuro Desktop Editor or Mobile App, there’s plenty available from manual operation. A three-way toggle switch lets you choose a short reverb based on those found in 60s ‘blackface’ amps, a long spring as found in some vintage combo amps, and a tank spring that emulates the sound of Fender’s 6G15 standalone outboard reverb. For tweaking, the Mix knob sets the dry/wet level, Tone controls the brightness, and Dwell alters the intensity, setting how hard those virtual springs are being driven. Level sets the pedal’s output level and incorporates up to 6dB of boost if needed.

To add tremolo into the equation, press and hold the small rear panel Control Input button, select the trem type with the toggle switch, and use the Dwell and Tone knobs to respectively set its depth and rate. The available tremolos are Opto and Bias types, plus Harmonic tremolo as found in Fender ‘brownface’ amps made between 1959 and 1963. You can have reverb with tremolo, or just reverb or tremolo on their own, depending on the setting of the reverb Mix knob and tremolo Depth.

If you set up some tremolo and then switch to another reverb type you’ll lose the tremolo, but the True Spring features three presets so you can store sounds (reverb, tremolo or combined) for instant recall. A press-and-hold on the footswitch puts you into preset mode (indicated by a red LED, instead of green), with a preset for each toggle switch position.

Obviously, with one footswitch there’s no way to have individual switching for reverb and tremolo, but it is possible to connect a Source Audio Tap Switch to the Control Input to engage or disengage the tremolo effects on top of an active spring reverb. That Tap Switch can alternatively be used to tap in the tremolo rate, and there’s plenty of dynamic control of parameters via expression pedals, the Hot Hand 3 wireless controller and MIDI.

The Neuro Desktop Editor/Mobile App lets you set up all of that external control, but also gives you access to much deeper editing with extra parameters, plus a bunch of different reverb engines. It also enables you to assign different parameters to the physical knobs.

Source Audio’s recent Ventris pedal featured great spring reverb emulation, and that is carried on here. These are extremely authentic in the sound and the way in which they react to playing, especially in that drippy attack that surf players look for. You’d be hard pushed to distinguish these emulations from the real thing - though they won’t give you that good ol’ crashing sound if you kick the pedal!

As it stands, those three variations could provide all the spring reverb you’ll need, but if you’re looking for more nuance, software editing will fine-tune the sound. Likewise, all three versions of the tremolo sound true to the original in-built amp versions, and between them adequately cover the vintage scene, from the phasiness of the harmonic trem to the typical pulsing of the bias trem.