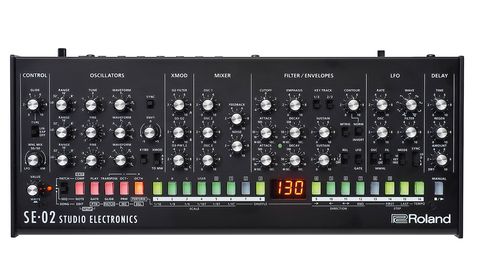 A great-sounding, portable and versatile monosynth for the studio and stage. It may be small but it packs a huge punch for a modest outlay.

Studio Electronics was one of the few companies still heavily invested in analogue technology in the ’80s and ’90s.

It initially repaired and rack-mounted classic synths including the MiniMoog (MidiMoog) and Prophet-5 (P-Five), but it soon made sense for it to launch its own analogue products, and they did so with a bang.

Its SE-1, ATC-1, Omega-8 and Code synths are all held in high esteem today, and many are still current products - a testament to their great design and sound.

More recently, SE has had success with the Boom/Tonestar ranges. Roland has been impressed by SE’s work and, while the Boutique range has until now been all about recreating past classics using digital ACB technology, with the SE-02 Roland has decided to work with SE and bring a fully analogue Boutique to market.

Roland has had success with its recent JD-XA and JD-XI, (which feature Roland’s own in-house analogue circuitry with Supernatural digital engines) but, as a precursor to the SE-02, Roland collaborated with Modular manufacturer Malekko for the 500-series modular. So quality analogue is firmly on their agenda!

The SE-02 is the debut product in Roland’s new ‘Designer Boutique’ line but follows the same form-factor as its ACB-driven Boutique siblings. This means it can be used as a desktop module or mounted in Roland’s own DK-01 dock or their K-25M keyboard enclosure for a fully self-contained solution.

Unlike previous Boutiques, the SE-02 has a dedicated power input for the included wall wart. This alleviates one of my main previous concerns, as you had to use a computer/external USB adaptor to power them (or batteries, which was great for travelling). The flipside is there’s no battery power for the SE-02.

There’s still an onboard speaker which is cool for travelling and for miking up, although with no battery power it’s less handy as you always need an external power source. Also conspicuously missing from the SE-02 are pitch/mod touch strips, so if you’re using it with the K-25M keyboard enclosure you’ll have no pitch or mod wheel facility.

We hope Roland launches an SE-02 specific enclosure, with proper pitch and mod wheels to get around this; perhaps they could put a rechargeable battery in there as well! Of course, if you’re using any other MIDI controller with wheels, you’re all set and most parameters/dials receive/transmit MIDI CCs too.

It’s amazing how much Roland/SE have crammed into the available space. There are 37 dials, 15 flick switches, 22 multicolour backlit buttons for sequencing and parameter selection, a two-digit red LED for patch numbers/parameter readouts and function selection (with scrolling messages for longer function descriptions), plus a red LED for tempo and a green LED to show that the envelopes are being triggered.

The switches all feel solid, though the knobs are of the plastic shaft type and have some give. We were worried that they would be hard to use accurately due to their small size and close proximity to each other but they work okay, though it’s quite easy to knock neighbouring dials when tweaking.

Everyone likes a decent sequencer onboard their synths, but not all sequencers are created equal and many don’t offer adequate functionality. The SE-02, however sports an excellent sequencer with plenty of versatility. The only real downside is that it’s limited to 16 steps - but with its versatile features, you can get some continually evolving results happening. You can lock one parameter to each step, change the first/last step for different feels and fills, change the scale, add shuffle, mute notes in and out, change gate time, add glide, change the direction of play (forwards/backwards/forwards-backwards/random) and you can key-trigger and key-transpose your sequence on the fly (using the K-25M keyboard only currently, not over MIDI). Also you can store 128 sequencer patterns onboard and build 16-part songs from them, with 16 songs in total available onboard. It’s basically an MPC-style song mode where you insert patterns into your song and tell the SE-02 how many times you want those patterns to repeat. Once again, we’d love some of these features on my JD-XA. Finally, let’s not forget that the sequencer sends out MIDI and there’s per-step trigger out too. Sonically, it’s quality and can go from warm and smooth to harsh and aggressive.

For performing, you’ll find classic control onboard including glide with linear and exponential modes, octave up and down buttons (with a large +/- 3 octave range) and a ‘wheel mix’ dial that allows you to dial in how much of the LFO and XMod is triggered by a connected Mod wheel over MIDI. Under this dial is a clickable value dial used for quickly scrolling through parameters and patches and for saving - something we’d have loved on our JD-XA!

Now for the very well-featured sound engine. Firstly the Oscillators section. There are three very stable and nicely fat/precise-sounding, temperature-compensated VCOs, with an auto-tune function that pulls them into line if they drift out (you can force tune the SE-02 when in Patch mode by pressing Transpose/the Value dial).

Each VCO has six MiniMoog-style waveforms (a throwback to the MiniMoog’s front panel) and VCO2 and 3 can be detuned against VCO1 to add richness and beating/detuning. These are wide range oscillators that have footage options from 32’ to 2’, plus each VCO has a ‘Lo’ option so you can use them as additional LFOs (in addition to the global LFO). This essentially gives you three extra LFO options. The Lo option is also handy for creating polyrhythmic textures, especially when you employ cross modulation between the oscillators.

As you can see, there’s a lot of mileage in this section and that’s before we even look at the great- sounding oscillator sync function and the ability to modulate VCO2 via the filter envelope (via the bipolar Env1 mod dial) for more ‘out there’ sonics. Finally, you can decouple VCO3 from the keyboard (for drones and evolving sounds) and there’s a selector switch to denote which type of cross mod the mod wheel brings in via the wheel mix dial.

The comprehensive and indispensable XMOD section allows modulation of filter cutoff via VCO2, modulation of VCO2’s waveform via VCO3 and finally, the pulse width of VCO 1 and 2 can be modulated by VCO3. There’s plenty of functionality for creating subtle or crazy movement, FX, atmospherics or more dramatic clangorous textures.

Next, we have a MiniMoog-style mixer, with a level control for each oscillator, white noise and another obvious MiniMoog throwback: feedback. This essentially routes the output (before the delay) back into the filter input internally for thickening or destroying your sounds; it’s yet another indispensable textural tool and can do subtle or wild. As on the MiniMoog, pushing the oscillator levels for additional drive into the filter section/VCA sounds great.

The filter section features a self-oscillating 24dB low-pass design with a ‘dual-gain-stage-amplifier’. It’s a great-sounding filter with plenty of range and balls! It goes from subby lows and growling mids, to piercing, liquidy highs. The resonance subtly fattens things up at lower levels, while it can get really vicious and crazy at higher values (though it does appear to step at these higher levels).

As on a MiniMoog, the resonance also robs a decent amount of low-end at higher levels but the flipside is you can use the resonance as a pseudo HPF. You can also play the filter during self-oscillation and it’s great for making quality kicks, hats and effect sounds. Add in some feedback for grit/dirt and girth and you’re away!

The envelopes go from nicely snappy to long, ranging from 10ms to 10secs. Again, they’re MiniMoog-style affairs; ADS type but with switchable release stages for envelope 2 (amp) or 1 (filter), or 1/ 2 together. Dual ADSRs would have been more flexible but this design obviously saved on panel space. You can also invert the filter envelope, choose legato or multi- trigger behaviour, the contour control can be addressed via velocity and the SE-02 also receives aftertouch data for filter/LFO. (Note there’s no velocity to amp currently.)

To top things off, there’s a nicely fast nine-waveform MIDI-syncable LFO with dedicated filter and oscillator amount dials. It also has a free running mode, one-shot mode and key trigger mode which adds to the versatility, plus there are switches for assigning the LFO to mod wheel for controlling filter/oscillator modulation amount in various strengths.

Plus there’s a sync switch for syncing the LFO and delay to tempo (internal/external), syncing just the LFO or syncing the delay (or no sync). The delay (digital) is fully bypassable, sounds lovely and really puts the icing on the cake, adding atmosphere and space to the sound. It can get long/trippy, or use it as a room-like reverb at shorter settings.

Considering there’s also a nicely-featured sequencer onboard, the SE-02 is a very impressive piece of kit. Sonically, it’s high-quality and can do everything from warm and smooth to harsh and aggressive. It’s a bit Rolandy and a bit Moogy/SE-ish but then with all the versatile modulation and shaping onboard, it has its own vibe too and it’s hard to make it sound bad. There are a few downsides but for just over £500 it’s a well-featured and solid-sounding bit of kit, clearly showing that collaborations are a great way forward!