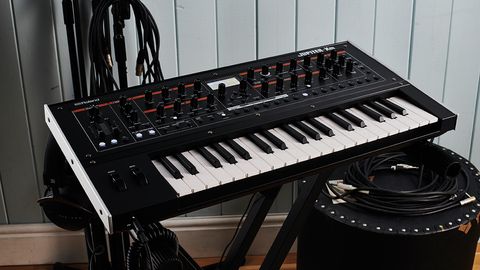 For anyone who’s looking to travel light with a machine that has all of Roland’s classic sounds onboard, this is just the thing!

The last Jupiter-badged synths we reviewed were the Jupiter 50 and 80 back in 2011. We were actually big fans of these boards, despite a slightly lukewarm reception from some. So here we are in 2019 and Roland has used the Jupiter name once more for an all-digital product.

We don’t mind this as Jupiter seemingly represents the pinnacle of its synth tech but its analogue association is still undeniable. We do hope that those of us still hankering for an all-analogue Jupiter-8 successor/clone can instead appreciate what this new synth is; an extremely portable, capable, compact ‘best of’ Roland machine. The Xm also has an upcoming bigger brother (the Jupiter-X), essentially the same synth but with a five-octave AT-enabled keybed and an expanded interface.

Build-wise, the Xm’s hardware is tank-like throughout and it features a tough, black brushed metal panel with aluminium ends. It’s nicely weighty, the switchgear feels excellent and the pots all have metal shafts too. Like the Jupiter-8, the panel features signature orange Jupiter stripes and very nice it looks too. The keyboard has three octaves and uses what appear to be the ‘slim keys’ found on Korg’s Minilogue, MS20 and Arp Odyssey Mini. However, the key travel is a bit deeper and the keys are sprung a little more stiffly which makes accurate playing easier; it’s certainly a high-quality action despite the smaller key size. Unfortunately, there’s no aftertouch (which would have really been amazing on this keybed considering the power under the hood) but it does receive AT over MIDI. Also, one extra octave would’ve been perfect, but I appreciate the compactness. On another portability note, besides the wall-wart, you can also power the Xm from eight AA batteries and it also features some really decent quality stereo Bluetooth speakers – a nice touch.

Next to the keyboard, you’ll find pitch and mod wheels (the same as the JD-Xi’s) and there’s a handy front panel mounted minijack headphone socket too. Flipping to the front panel, you first find a volume dial and underneath are two sliders and three switches labelled S1, S2 and S3, all easily assignable in the mod/scene matrices. Following on, we have the new I-Arpeggio (a new artificially-intelligent multi-part arp). Then there’s an oscillator section with type, pitch, level and mod dials, plus three buttons for engaging ring mod, osc sync or xmod. Below this, there’s an LFO section with a type (wave) dial, plus rate, fade time and depth. These dials can also control LFO2 (if the engine you’re focused on allows it) by hitting the LFO 2 button and both LFOs can be directed to pitch, filter or amp or mod wheel.

Below this, you’ll find transpose and octave +/- controls and in the middle, there’s a clear white-on-blue screen which is used for deeper editing. On this point, there’s inevitable menu diving (with so much under the hood) and while navigation isn’t too bad using the two navigation knobs, you will end up using these a helluva lot and currently there’s no editor – but there are so many great presets you may not even need one!

There’s a modelled ‘vintage’ filter section with type, cutoff, resonance, key follow and three vintage filter types (R=Roland, M=Moog and S=Sequential) so you can achieve some nicely different characters here from three legendary synth manufacturers. Then there’s the envelope section and these ADSR and depth controls can be assigned to pitch, filter or amp (or all). On the right, we have effect controls including master effects level for the plentiful MFX effects onboard (around 90 of which are already found in the JD-XA, plus some great new ones including a Juno-106, JX, and CE-1 Chorus, plus an MXR Phase 100 emulation, Fattener and MiniMoog filter). There’s also an analogue-style drive, plus levels for overall reverb, chorus, delay and delay time. So pretty much everything you’d want is available to hand via a direct front panel control. Holding shift down at any time and turning any dial will also take you to the corresponding editing section in the menu system which is neat. One thing worth noting on this early OS (1.01) is that sometimes it’s not clear what the current panel focus is (or what’s being controlled when you turn a panel dial). Hopefully this can be improved in a subsequent firmware update. Finally, there’s no panel portamento dial (it’s hidden in the menus) but portamento can be assigned to the sliders easily enough.

The sound structure works as follows: Scene (a snapshot of all the panel settings), Zone (contains keyboard ranges, splits MIDI info etc), Part (up to five MIDI parts make up a Tone including one drum part), Tone (a sound/patch) and then Partial (Oscillators) of which there are four per tone. The Xm uses Roland’s new ZEN-Core engine/platform (also found on the Fantom) but here it uses ‘Model Bank’ for authentic analogue modelling (not ACB), alongside sample playback (PCM). This essentially means we get all Roland’s classic analogue’s emulated, plus XV/PCM sounds/banks from the XV-5080, AX-Edge keytar, lovely RD pianos, a super-clear vocoder and four authentic analogue models of the Jupiter-8, Juno-106, JX-8P and SH-101. These models/engines are labelled on a sticker (though model slots can be rearranged to your liking). In total there are eight model slots onboard (per scene) for different model engines, encouragingly for future model additions/expansions. While the analogue models aren’t modelled to the same depth as ACB, they are nonetheless rich-sounding, with the original’s inherent characters coming through. There's a tangible warmth and definition to these sounds, and parameters such as Condition add that extra vintage analogue vibe, whilst the PCM section has an analogue feel (just like the JD-Xa’s digital section). Smooth parameter changes are helped by the high-resolution pots with values going up to 1024 (rather than Roland’s usual 127 steps) and the other big bonus is that the new ZEN-Engine/Model Bank tech allows polyphony of up to 256 notes (32 max with the analogue models) so you aren’t stuck to small voice counts like the Boutique’s. PCM-wise, you’ll find the entire (and classic) XV-5080 engine/sounds (with new ZEN engine features too such as PCM-sync) plus newer tones from the AX-Edge keytar, classic Roland drum machines and great acoustic kits. This really is a full-blown Roland rompler/analogue emulator in compact format!

Our main gripe is that editing such a machine on a small screen isn’t ideal and certain panel controls in this early OS don’t always correspond to parameter editing as you’d expect. I initially couldn’t find a way to alter the cutoff/other settings over all the partials/parts at once but you can quickly assign the sliders and assignable buttons to ‘Scene Cutoff’ to achieve this. Notably, the 16 white-backlit round buttons above the keyboard can select scenes and categories directly; used in combo with the function button, you can select or switch on/off parts or oscillators while editing. These buttons also select models and work as step entry for the I-Arp. However, being all white it can get confusing.

The Xm is a lovable machine with some initial editing quirks that can no doubt be improved with new firmware. It’s basically a ‘best of’ Roland analogue emulation and PCM sound module with a keyboard, and its power is quite something! It can emulate Roland’s classic analogues authentically, it can vocode, it can cover all your classic sounds, it has great connectivity, battery-power, speakers, it’s a five-output USB audio interface, it’s built robustly and it does sound fantastic. The downsides are its price, the lack of ‘proper’ sequencer and the excessive need for menu diving.

However, if you want a ‘best of’ Roland box that you can easily tour with (or have in your studio) and can cover all types of sounds authentically, this is one unique and highly recommended machine!

MusicRadar verdict: For anyone who’s looking to travel light with a machine that has all of Roland’s classic sounds onboard, this is just the thing!