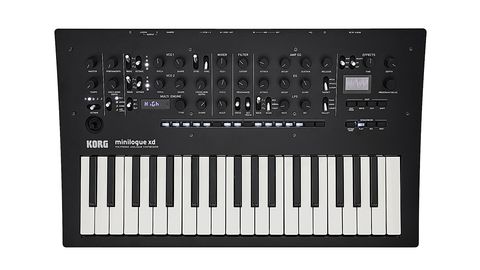 Each model offers something unique for a wide range of budgets. This new model slots comfortably into the Logue range between the original Minilogue and the Prologue 8.

The XD is built into the same case as the original Minilogue and build quality feels similarly tough and roadworthy. Once again, the case is metal, the rear panel is wood and the pots are all metal-shafted and sturdy, topped off with black plastic knob caps with grey pointer lines to show positions.

The buttons are the same as the Minilogue and are tough translucent plastic; this time they’re backlit with white LEDs. Once more, there are several ‘paddle’ selector switches and bright-white round LEDs show selected modes, octaves and wave selections. This time there are also 500 preset spaces, not 200.

On the keybed front - well, it’s the familiar three-octave velocity sensitive ‘Slim-Key’ keybed as found in the original Minilogue, the ARP Odyssey and the MS20 Mini. Some love it and some don’t but we’ve really grown to love this keybed on our Minilogue. You can play super-fast lines easily and span a wider range than with full-size keys. It also keeps things nicely compact which is important for portability and space-strapped desktops.

At first glance, you might not think much has changed; not so! The first thing you may notice is the spring-loaded metal joystick which has replaced the angled stick of the original Minilogue. This is a welcome improvement and feels natural to use - push the stick left to bend pitch down and right to bend pitch up. You can also set a different amount of bend for each direction which is great. Then you also have two further assignable positions which come into play when you’re pushing the joystick up or down (you can assign each position its own unique parameter, with 29 available to choose from). As a performance tool this is fantastic and cycling the stick around can yield some really interesting morphing sonics (joystick movements can also be sequenced).

Next, we have a dedicated portamento control (instead of the Minilogue’s less intuitive portamento menu) and below, the familiar (V)oice (M)ode (D)epth dial the functionality of which changes depending on the mode. Here there are four main modes (compared to eight on the Minilogue). We have Poly mode (with duo mode via VMD), Unison (with detuning up to 50 cents via VMD), Chord mode which offers several chord variants via VMD (the mono mode is the first mode in Chord mode), then you have a latchable arpeggiator for the final mode. Note that the sub oscillator feature found within the original Minilogue’s mono mode isn’t included in the XD, though instead you can use one of the Multi-Engine’s VPM waves.

Speaking of the Multi-Engine, it offers a huge amount of sonic scope and is exactly the same as the Prologue’s, except that it’s restricted to four-note polyphony (the XD is four-note polyphonic just like the original Minilogue). The addition of this engine is huge news, especially now that some great (Prologue) user oscillators are appearing from several third party developers. With the upcoming Minilogue XD librarian you can simply drop these third-party oscillators/effects into the XD’s user slots to expand its sonic palette.

As it stands, the XD ships with Korg’s own Waves oscillator in the first user slot and there’s space for another 15 user oscs and eight user effects. As expected, we also have the Prologue’s high/low/peak and decimate noise options and the VPM (Variable Phase Modulation) FM mode which has 16 oscillators along with its own mod envelope. When combined with some shape modulation, VPM provides everything from classic FM Eps, strings and metallic tones, through to really quirky, atonal and edgy vibes too. Or use VPM to provide a simple sine, square or saw-wave sub- oscillator beneath the VCOs.

Talking of VCOs, there are two here, each with three waves plus a pitch and shape control (just like Minilogue). They sound nicely vibey, tuning is solid after a short warmup and as before, you have cross mod, sync and ring mod available to spice up your sounds! Next up we have a three-way mixer with level controls for VCO1, 2 and the Multi-Engine (so you can mix/blend your oscillators as required). Pushing the VCO levels and employing the two-position filter drive switch (taken from the Prologue) can push the XD’s mixer and filter from subtle to major overdrive. Together these features can turn the XD into a fantastically gnarly dirt-machine.

The XD’s filter is a two-pole design with many sweet spots and a very wide frequency range. Despite losing the Minilogue’s four-pole option, the filter voicing is versatile and works well for all sounds (including low-filtered ones where it retains bass even with high resonance). It also works well for nasty leads and grainy pads and can get vicious, creamy and screamy (at its higher limits)! Again, the drive switch adds significant dirt and gain and the self-oscillating resonance has many characters (boosting the midrange, providing extra grain/juiciness and/or adding fullness/texture to the lower/higher mids). Like the Prologue, the XD excels at dark/moody textured synthscapes but also at aggressive sounds. We do miss the Prologue’s low-cut switch (and the high-pass filter from the Minilogue delay section) but a digital HPF user-effect would be a great alternative.

The EG/Mod section has undergone some significant changes. The envelopes sound punchy and well-defined and the release time is super-long too. You still have a full amp ADSR but the second EG (used for filter/pitch) is now AD-only so that new target options can be squeezed in. In addition to the LFO to pitch, shape and cutoff options on the original Minilogue, we now have three further options - EG to pitch of all oscillators, EG to pitch of OSC2 only and EG to filter cutoff. These are all useful additional sculpting options and although the LFO wave options remain the same, you have three LFO modes including BPM (tempo- locked), Normal (audio rate capable) and a new One-Shot mode. These all work well, though some will miss the EG to LFO rate/intensity options found on the original Minilogue; these made delayed and sculpted LFOs possible (including delayed vibrato). Perhaps this could be added?

The original Minilogue’s sequencer (with four motion lanes) has been nicely upgraded, incorporating features from the Monologue. All 16 sequencer-step buttons are present on the front panel (before you had to scroll through two pages). You can now hold steps and lock parameters to them too. As before, there are step and real-time modes but now there’s a metronome which makes it easier to find step 1 when recording a new sequence. You can also hold the rest button to mute the sequence in and out momentarily (and add ties and rests as before), plus sequence the voice modes and Multi-Engine wave changes (ace!). There’s also swing, gate length and sequence length parameters and the sequencer keeps playing when you change/save programmes too; this is huge, as you can effectively chain sequences live using the parameter dial/favourites function. Compared to the Monologue, there’s no slide mode or keyboard sequence trigger/transpose but these can be added. Arpeggiator-wise, the XD’s works simultaneously with the sequencer. It’s also beat-syncable and has 13 modes including rise/fall, random, manual and poly (for arp-ing chords)!

Finally, the effects section adds a whole new dimension to the original! The single delay effect and high-pass filter found on the original Minilogue have made way for the Prologue’s excellent stereo effects (plus user-effect options) and the XD even beats the Prologue due to its simultaneous delay, reverb and mod effects; they sound superb throughout (including some of the most musical reverbs around in a synth) and you’ll find 10 types including, smooth, riser, space and horror! Phaser, chorus, flanger and ensemble stereo-effects are also included and unlike the Minilogue, the XD also features stereo outputs (which is great)! Also (again like the Prologue), there are several sub-types of each effect to emulate classic mod/reverb/delay effect pedals/boxes. Effect selection is easy using the direct flick switches and even with all this added complexity/ functionality, everything is still easily accessible and intuitive with menu diving kept to a minimum.

So which should you buy, the original or XD? If we had to choose one, it’d be the XD due to its more powerful sequencer, extended general versatility, user-customisable Multi-Engine/effects, the joystick for real-time control, user scales/tunings, more inspiring vibe and excellent motion-sequenceable stereo effects/output. Along with the new damper pedal jack and dual-CV inputs (to interface with modular gear), the XD is a nicely different flavour of Minilogue, and its unique personality is a hugely welcome addition to the range as a whole.