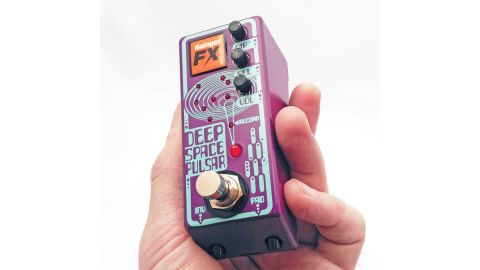 Yet another tick in the, 'golden age for bass effects' box!

We’re always telling you that we’re in a golden age for effects, but we’re going to repeat ourselves right now thanks to this new stompbox from the Rainger company.

The Deep Space Pulsar, doesn’t distort, chorus or otherwise modulate your bass tone, so essentially it’s not a traditional ‘effect’ at all: however, what it does do very well indeed is hook your bass up to a variety of rhythm sources and drop your sound in and out between the beats.

You can use the included mic to capture your drummer’s kick drum, or tap your finger or foot on a silver disc called an ‘Igor’, which plugs into the pedal and triggers an LED to show you when it’s recording or playing. Tasty bonus features include the sexiest galaxy of operation lights we’ve ever seen on a pedal, and the fact that you can use it with guitar too.

The effect is moderated by Dip and Release controls, which determine how ‘far’ your bass note falls during a beat event, while an Inv (inverse) control allows you to flip the whole effect and sync your bass with said beat. Clever stuff, this, referred to by studio boffins as ‘sidechaining’.

An absolute joy to use. Did we mention we’re in a golden age for bass effects?