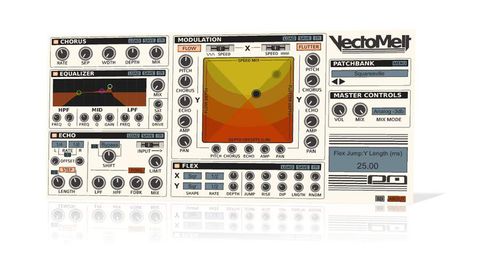 We were utterly enraptured by Psychic Modulation’s ‘VHS-style’ EchoMelt effect in our review, scoring it 5/5. VectoMelt is to all intents and purposes ‘EchoMelt 3’, despite the original still being available to buy for £49.

In a nutshell, VectoMelt is a multieffects plugin (VST/AU) geared up for decidedly retro and organic-sounding pitch modulation, delays and distortion. Its three audio signal processors comprise Chorus, Equalizer and Echo, each with its own dry/wet Mix control. The first is a luscious two-voice chorus with voice separation and widening, while the EQ offers three bands (down from five in EchoMelt for unknown reasons, but now with resonant LP/HP filters) of frequency shaping, plus saturation and overdrive. The Echo module is the star of the show: a feedback delay and pitchshifter with stereo and ping-pong modes, filters and a limiter. It’s an incredible source of vibey spatialisation and dub-style delay washes.

EchoMelt’s LFO-driven Melt section has been supplanted by a big XY pad - called the Modulation Vector – which controls a pair of mixable modulation generators called Flow and Flutter, and is itself governed in part by the Flex modulator below - see Flex appeal. Identical to EchoMelt’s Wow and Flutter modulators, Flow and Flutter are basically mixable ‘slow’ and ‘fast’ LFOs, Flow running at 1-15Hz, and Flutter at 15-30Hz. While EchoMelt only allowed mixing of those two LFO outputs for modulation of Pitch and Amp (volume), however, VectoMelt not only adds Chorus and Echo delay times, and Pan to that list, but also lets you set the modulation depth for each parameter to one value for Flow and another for Flutter. Movement on the X axis of the XY pad mixes between the Flow and Flutter LFOs, transitioning all five modulations between their two rates and depths, while the Y axis scales all ten modulation depths globally, from no modulation at all at the bottom to their full dialled-in amounts at the top.

The Modulation Vector XY pad facilitates mixing between the Flow and Flutter LFOs via manual or automated movement of the vector point; but this can also be modulated around its user-defined position in the Flex section below, which takes the idea behind EchoMelt’s Snag panel and runs with it.

First, two LFOs create cyclical movement of the point on the X and Y axes, with a broad selection of waveforms running at synced rates from 16/1 to 1/16T. The second Flex stage then generates quick deviations (like tape getting briefly snagged up in a tape deck, for example). The Jump knob sets the amount of deviation, while Random varies its timing within a window of up to 5s. The Rise, Dip and Length parameters work like an envelope around that, establishing the speed of movement of the puck away from and back towards its actual position (up to 500ms each), and how long it holds the modulated position in between (up to 250ms).

Each modulation target also has a Depth Offset knob, for differentiating the amount of modulation between the left and right channels. With so much stereo manipulation taking place throughout the plugin, the effect these have can be unpredictable - in a good way.

As well as that, VectoMelt introduces a Randomise button to every section, for instant inspiration. The Echo module also has an Input slider, for using it like a send effect within the plugin; Offset knobs for the Left and Right delay times, enabling freeform timing variation in Step mode; and adjustable Glide rate for Rate and Length transitions. And the EQ now works on the Echo input even when set fully dry.

The Modulation Vector and Flex section really do change the game entirely. The addition of Chorus and Echo as LFO targets adds another dimension (or two) in terms of pitch modulation, while being able to ‘melt’ between two complete LFO assignment states works in a whole new angle of movement and animation that makes EchoMelt seem positively static in comparison. Pitch modulation is handled differently to EchoMelt, too, so there’s no messing about with buffer size to maintain quality.