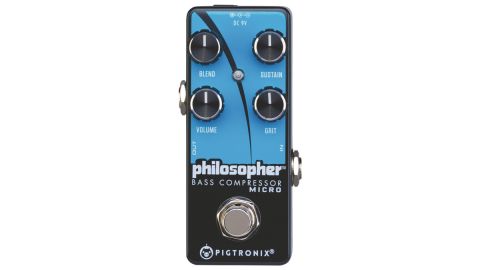 Have a tweak of the controls of Pigtronix’s new fun-sized bass compressor and all is as it should be, until you start messing with the Grit control - and a mighty overdrive tone springs from your speakers.

It’s very satisfying to hear such a giant effect emanating from a pedal the size of the lump of cheese that you probably shouldn’t have had for lunch. What’s more, you can modulate the drive tone effortlessly, moving from a smooth, synth-like fuzz to a doomy wail straight from the drawer marked ‘Lemmy’.

In fact, although this unit is primarily marketed as a compressor - and indeed, it does compress your sound usefully - its most prominent use will, we predict, be as an affordable overdrive. Not that Pigtronix has stinted when it comes to the compression features; the Sustain control does a great job of varying the effect threshold and limiting (or delimiting) the peaks and spikes caused by your playing, simultaneously ensuring that the bottom end of your sound isn’t diminished.

The Grit control is the distortion, tuned (it says here) “especially for low-frequency domination”, and there’s a Volume control for that epic 128-bar solo in the middle of ‘Freebird’. The key control, though, is Blend, which determines the balance of clean-versus-effected tones. Personally we found a touch of uneffected signal added some punch to the overall sound, although that will obviously depend on a given bassist’s individual goals.

On a practical note, the true-bypass switching ensures that the unit doesn’t muddy up your tone when you’re going straight through it, and there’s an internal voltage-doubling circuit that gives you and your active bass 18 volts of DC. All this for a US-made pedal that doesn’t cost a crippling amount if your intoxicated guitarist accidentally kicks it into the moshpit. Thumbs up from us.