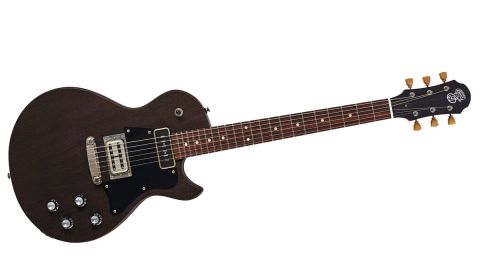 This guitar lies at the start-point, price wise, of the ever-expanding Patrick James Eggle line and is simply a beautifully considered rock ’n’ roll machine that’ll suit your pub or arena stage in equal measure.

Having recently completed his outstanding acoustic guitar orders, and given his workshop an “electric-centric” makeover, Patrick J Eggle and his four-strong team are now firmly in the electric guitar business.

And it’s a typically modern ‘boutique’ business at that, as Patrick explains: “We’re making 10-12 guitars a month, and my goal is to get up to 20. We don’t have a huge number of dealers but we are struggling to keep them supplied. We took on The Music Zoo, in the USA, at this year’s NAMM show back in January and we haven’t shipped them one guitar as yet. In fact, the one you have there is going to them.”

Lucky them, we say. This latest in the Macon line is purposely stripped back, but shouldn’t it really be a ‘Special’ rather than a ‘Junior’ in classic guitar terms? “Yes,” laughs Patrick, “I guess you’re right. It was only the way it happened that we called it a Jr: it’s like the ‘light’ version of the normal Macon: slab body, a junior version really. There will definitely be a double-cut version and versions with two controls, probably one with a single pickup too. The guitar you have there is our entry into this world.”

There’s obvious homage paid here to Gibson’s original slab body Les Paul Special from the 50s but with more of a rock ’n’ roll twist. While the guitar isn’t relic’d, all the parts and surfaces - with the exception of the clean control knobs - have a muted, aged patina, which gives a lived-in, used appearance but without a ding in sight. The one-piece slab mahogany body has a deep brown, dark chocolate hue with a textural open-pore matt finish that’s the polar opposite to all the ‘don’t touch me’ dipped- in glass glosses we see. This finish will age nicely, burnishing up no doubt with use.

The neck is a perhaps surprising choice of roasted maple on this traditionally all- mahogany set-neck recipe but in keeping with the rest of the instrument looks like it’s been whipped off an old Italian cello or the like. There’s a beautiful subtle flame to the caramel-hued back that’s given a nitro satin/low gloss sheen, which is worn through on the playing surface to what feels pretty much like raw wood.

Another subtler change to the expected ingredients list is the fingerboard, a finely striped piece of Santos rosewood (also known as pau ferro or Bolivian rosewood). It has a lighter colour than East Indian rosewood and really suits the clay dot markers, while the ebony headstock facing - with its almost over-fancy inlaid logo - is a beautifully burnished-looking low gloss. Those old-style tuners with their browned keystone buttons look equally ancient, like the aluminium ABM wrapover (a pretty close version of PRS’s Stoptail). It’s a detailed job - all the screws and small strap buttons have a similar aged anti-sheen finish while the scratchplate and rear control plates are black Bakelite - a favourite of Patrick’s.

While the control layout follows Gibson protocol the pickups throw in another twist. Made in the UK by Mojo we get a Gretsch-y Mojotron at bridge and a ‘staple’ pole P-90 that recalls the DeArmond Dynasonic in its partial cover. Peering into the rear control cavity we see 500k Emerson pots, each volume control with a cap (0.001 microfarad) and resistor (150 kohms) in parallel, treble bleed circuit. The tone caps are large grey Soviet paper-in-oil K40Y-9s, a 0.033 microfarad on the bridge and a 0.047 microfarad on the neck pickup. There’s a CTS pull/push switched tone pot which selects a partial tap, via a 1.2 kohms resistor, of the bridge humbuckers and voices - primarily, the neck-facing single coil plus some of the dumped coil.

The woods are well chosen and result in a relatively light instrument that feels immediately comfortable seated or on a strap. It certainly has that Junior/Special vibe in that regard. And comparing the Macon with a ’57 Les Paul Junior you notice a slight increase in the neck angle here - the bridge sits slightly higher - and there’s slightly less headstock angle to the Macon. Neck-wise, the Macon’s ‘Fat C’ certainly chases the Les Paul Junior with a full 25mm depth at the 12th fret on both, with the Macon very slightly deeper at the first: 22.8mm as opposed to the LP Jr’s 22.4mm.

Shape-wise, the Macon is very similar, slightly less ‘V’d in the lower positions while the upper positions feel very similar to that classic full C that feels much less clubby than a rounder D shape. Of course, the worn-through finish of the Macon lends its own twist and the tall, medium gauge wire is much more contemporary feeling than the Junior’s original vintage- small wire. The slightly tapered heel and marginally deeper cutaway also offer subtle improvement in terms of high fret access compared to the bulkier heel of a Les Paul Junior.

The clear ringing acoustic sustain married with these pickups is always going to produce a little more edge than the classic Gibson platform and that’s pretty much what we hear: a throaty jangle at bridge, enhanced percussive attack to the sweeter neck and a crisp mix. What surprises is just how much ground the Macon covers: cleaner snappy blues styles, for example, fall out of the neck; pull back the volumes and that mix sounds almost acoustic-like, especially with the split on the bridge engaged. But then the full bridge voice makes for a near perfect roots rock rhythm sound. Hot-rod rockabilly, especially with that bridge split, is effortless and kick in a good overdrive or fuzz and it’s Detroit garage meets Arctic Monkeys with a nod to AC/DC along the way.

Not everyone will get the staple P-90; it is cleaner and a little more percussive than a more conventional P-90, but that character, mixed with the bridge and a clean compressed amp tone, is a shoo-in for your funk chops.

The volumes and tones work extremely well, adding even more subtle shading if you need. And for all the versatility its capable of, you might just want to show it a dirty amp voice and rock out. When a sound makes you smile like this, you know it’s good.

Many small boutique builds often feel like works of art that should be coveted and discussed in hushed tones. Not this Macon Jr. It lies at the start-point, price wise, of the ever-expanding Patrick James Eggle line and is simply a beautifully considered rock ’n’ roll machine that’ll suit your pub or arena stage in equal measure. Finely crafted with an expansive voice and with one of the best necks we can remember, place your order swiftly: on this evidence, Patrick’s back-order list is only going to get longer.