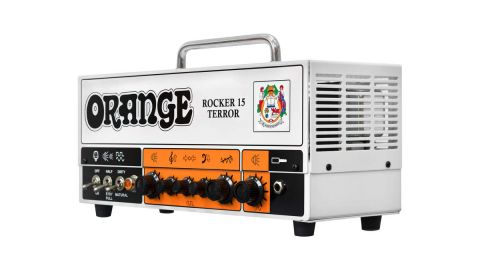 An impressive all-round amp with much in its favour.

The original Orange Terror Bass amp built its own fanbase at a time when portable amp heads with built-in valve distortion were few and far between.

When the amp was withdrawn, there was much gnashing of teeth! The customer is always right, of course, and due to widespread demand, the Terror Bass amp has been redesigned for 2018 - with more grind and tonal colour aimed at players for whom Class D amplification doesn’t cut the mustard.

Housed in a metal ‘lunchbox’-styled chassis with a solidly attached metal handle and furnished with a hard-wearing carry case, the Terror Bass is ideally suited to the player on the move. Weighing in at 4.5 kilos, transportation certainly isn’t an issue and it definitely looks up to the task.

Based on the AD200 amplifier, this hybrid-design utilises a 12AX7 valve in the preamp stage and a 12AT7 valve for the Send output of the FX loop. The return input has a solid-state stage and a solid-state Class D output stage. Venting to keep the valves and circuitry cool is provided along the top and sides of the chassis.

In order to offer the player as much flexibility as possible, each side of the unit has controls, selector switches, inputs and outputs. But don’t begin to expect a cluttered amp - far from it. The front control panel is relatively simple to operate, with Gain and Volume controls, a three-band EQ, a -6dB Pad switch for active basses, a Clean switch for smoother, non-distorted operation and a Standby facility alongside the power switch to extend the life of the valves. Speakon outputs and an impedance switch can be found on the rear, and there’s a voltage switch on one side. The XLR DI, Ground/Lift switch and FX loop are located on the other side.

The livery of the unit is eye-catching, as you’d expect from Orange, but surprisingly, the controls on the front panel feel a little slippery in operation, and a little ‘plasticky’ in how they feel and operate. The controls turn too smoothly, as if there’s no resistance, so be aware that if you like to tinker with your sound and amp controls during a gig you can’t be too heavy-handed - it’s easy to overdo it.

Armed with several cabinet formats and an assortment of passive and active basses, we put the Terror Bass through its paces. First point - this is a loud amp, so the name is fairly apt! With the EQ set flat and a pair of Fender passive instruments through a 2x12 cabinet with the tweeter also set flat, the clean sound is warm and powerful with plenty of body.

Playing with a pick gives a great rock tone straight off the bat, while adding some distortion courtesy of the 12AX7 in the preamp produces the signature Orange tone. And what a tone it is: richly coloured, with enough grind and distortion to warm the sound up, but never venturing towards a lacklustre fizz. Setting your distorted tone and then using the Clean switch to provide more polite tone seems to be the way to go. Using an active instrument requires the Pad switch; in use, it works effectively, preventing preamp overdrive.

Bringing the EQ controls into play, the extremes of each frequency aren’t radical. This is to the amp’s benefit, as it shows that the designers have opted to go with usable rather than extreme tones. Switching the amp from 8ohm operation to the 4ohm setting brings a limiter into play to control the output and to restrict transient peaks within the bass signal from damaging the speaker(s).

Understandably, the rock and metal brigades will have a keen eye on this amp, and we’re happy to report that it certainly delivers for them. It copes well with both active and passive basses, although you may find that some active circuits require you to carefully tailor the EQ, being a little too powerful otherwise, especially in the bass and low-mid frequency ranges. Our passive basses had no such problem and really benefited from the tube warmth on offer; they came to life with some moderate EQ and valve coloration. Even for those players who seldom need distortion, this is still a vibrant, well-featured amp with much to offer.

The Terror Bass is very sensibly priced and will no doubt be welcomed back by its army of admirers. It packs a real sonic punch in a cost- effective, easily-transportable package, and its versatility is a real bonus - so much so that you have to question why it was withdrawn in the first place. Seek it out, put it through its paces and see if it catches your ear as it did ours.