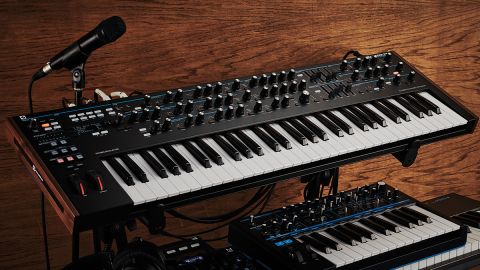 Though the Peak is still great, Summit is even greater. A powerhouse polysynth, perfect for classic sound emulation and design

Back in July 2017, we reviewed Novation’s Peak, their flagship hybrid polysynth featuring eight voices and analogue filters. Fast forward to September 2019 and Novation has launched its newest flagship keyboard, based on two Peaks with various other juicy improvements.

Once again designed in collaboration with Chris Hugget (Chris designed the legendary OSCar), Summit (Twin Peaks would have been too obvious perhaps!?) feels just like Peak in as much as it’s a premium product with super-tight rubberised knobs, good quality faders, nice, satisfyingly clicky buttons and a clear OLED screen with adjustable brightness.

This time, however, the twin expanded Peak engines are packaged in a very high-quality metal chassis, which stands firmly on a blue rubber surround/pad on its underside. Unlike Peak, Summit has a proper IEC power connector inlet and built-in power supply, so the wall wart is gone, making Summit feel even more ‘pro’. With the new expansive front panel, the plethora of controls have been spread out nicely, though personally I would’ve placed the control section and screen centrally. However, like the Peak, the panel is very intuitive with lots of hands-on control and many of the Peak’s hidden menu items now have dedicated panel controls on the Summit, with all the main controls at your fingertips. Again, deeper parameter editing is done via the menu system but you’ll need to do this less than on the Peak due to the extra front panel controls. The screen is also pleasingly easy to read and navigate.

Hardware-wise, Summit has a lovely, five-octave keybed which, in line with the rest of the hardware, feels premium. Notably, the black keys have a wider top surface than most and these feel great. Velocity and aftertouch response is spot-on too; this is a very playable, precise and nicely-balanced synth-action keybed. The chunky rubberised backlit mod/pitch wheels also feel very premium and add lots to the overall expressivity of the synth.

As Summit is based on two Peaks, it’s now a 16-voice polyphonic synth. It uses 46 (three oscillators per-voice) high-res anti-aliasing ‘Oxford’ digital FPGA-based oscillators (NCOs) along with wavetables as its main sound sources and it’s now bi-timbral with each eight-voice Summit engine directly addressable via the A and B buttons on the front panel, along with layer, split and dual modes. This makes it easy to focus on each synth individually or together by simply pressing A, B, or A and B together (to edit each panel simultaneously). This works slickly and all the panel lighting moves from blue to red to denote which panel is being edited. Each of the three oscillators onboard features analogue-style waveforms, plus 17 wavetables giving a vast range of tonal possibilities. What’s great is that all the wave types onboard have variable shapes (per oscillator) so with just one oscillator and LFO/Envelope, shape modulation can cover a surprising amount of ground.

Summit has its own strong sonic imprint which is precise when required but with plenty of ways to add analogue soul too (the beauty of digital oscillators mated to analogue filters). It can approximate the tone of both classic digital and analogue synths (with its nearest rivals, sonically and feature-wise, being the Prophet REV2 16 and Prophet 12). Like the P12, Summit can also produce Linear FM sounds via the mod matrix and now also via the front panel’s new dedicated FM section.

On the subject of modulation, Summit has a plethora of options available and all are easy to dial in either from the front panel directly or via the two 16-slot modulation matrices per layer (with 17 sources and 37 destinations and depth control). This is accessed via the screen, menus and buttons. There are two polyphonic audio-rate LFOs per-voice (with low and high rate modes) and two further global LFOs, along with two mod envelopes.

Each oscillator has LFO 2 hardwired to pitch on the front panel (for ease) or you can dive deeper into the mod matrix for further assignments or re-routing. While there’s scrolling involved for assigning and deeper parameter control editing, it’s all kept to a minimum and it’s easy to dial in parameter changes with the three-row select buttons, page buttons and data dial.

The mod matrix itself is a breeze to use and ensures you can get very deep and complex with your mods for twisting your sonics. In addition, on the front panel, you’ll find plenty of further mod options. For example, in addition to Envelope 1 (amp), you have two further assignable mod envelopes (Mod Env. 1 is wired to Filter on the front panel) but hit the select button and you can access a second mod envelope and assign it to anyone or more of the available destinations per-layer. All the envelopes (now with direct loop buttons on the front panel too) sound snappy and detailed, aiding the creation of some punchy bass, drum and perc sounds. Coupled with the killer analogue filters and VCA, (plus the various distortion and overdrive stages and effects), you get some very complex dual-layer textured sonics, nicely analogue-like pads and leads and with all the mod options and new four FX Mod slots (plus aftertouch) you can get some altogether more futuristic stuff going.

Filter-wise, in addition to the single state-variable self-oscillating (in all modes) OTA filter per-voice, (with 12/24dB slopes and LP/HP/BP modes) we have a new dual filter (with nine combinations of LP/HP/BP) mode so you can achieve far more complex filtered and vocal-like sounds compared to the Peak. Consequently emulating other dual filter synths (such as the MS-20, Oscar and MatrixBrute) is now possible. The Peak’s lovely pre/post filter overdrive is available too and the genius is that you can really control wherein the signal path the drive and grit occur (like the MatrixBrute). This gives several controllable distortion flavours. The versatile filters can be smooth at lower res but can also get spiky and gritty in an almost Oberheim-ish/Memorymoog-like way at a higher resonance. One huge improvement over the Peak is a stereo audio input to route external sources through these lovely filters and the effects. Again, there are other ‘humanising’-type features including ‘filter divergence’ which ages the filters and sends them out of calibration, which is a big aid for vintage-style tones.

In terms of performing and getting hands-on with the Summit, the excellent keyboard/aftertouch, new wheels, dual layers, splits, second set of outputs and FX Mod have really transformed the performance and studio capabilities compared to the Peak. The two assignable ‘animate’ modulation buttons per-layer are fun and can inject subtle or more crazy modulations into your sounds on the fly. As with most contemporary synths, the Summit can also send/receive MIDI commands via its front panel, keyboard, wheels and controls (making it a great controller for other MIDI gear or softsynths) and every parameter you’d likely want to use in a live performance context is right there. It’s great having all the onboard effects under direct control (via their respective sections) so you can really spin your sounds out using the delay, add space and atmosphere using the lush onboard reverb or make things wide and bubbly using chorus. All the effects are great, complementing the oscillators perfectly. As on the Peak, Summit has other essential features on board too, including a great poly-arpeggiator, unison spread, Vsync (sync using one oscillator) and there’s also unison/mono-legato modes and poly-glide. This all sounds much bigger than the Peak due to there being double the voices!

Summit is the best of the already-great Peaks, with double the polyphony and all the criticisms from my Peak review addressed. It has much more in the way of sonic-shaping, a unique and huge tone palette suitable for all styles of electronica, a ton of hands-on control and it’s robustly built. Again, Novation has delivered an excellent synth – if you’re in the market for a 16-voice hybrid poly, this has to be a frontrunner on your list.

MusicRadar verdict: Though the Peak is still great, Summit is even greater. A powerhouse polysynth, perfect for classic sound emulation and design.

"Compared to similar synths, such as the Sequential Prophet 12 or the Roland JD-XA, the Summit is a relatively affordable and great-sounding choice for producers looking for a workhorse synth to anchor their set up."
Perfect Circuit

"Peak was already a great synth and now you get two plus more for less than twice the price. A winner!"
MusicTech