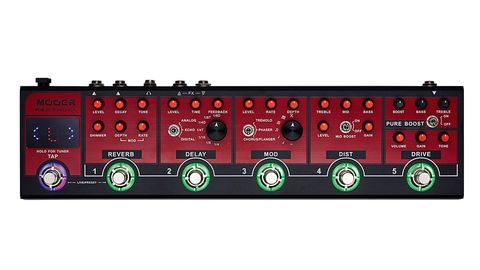 Essential effects in one package.

We are all familiar with the hi-tech digital multi-effects pedal, typified by the Line 6 Helix.

But there is another sort of multi-effects pedal that is perhaps not so well known: the sort that’s almost like a bunch of stompboxes glued together side-by-side, perhaps less versatile but having the advantage of taking up less floor-space, making it more portable than some of the fully-loaded behemoths.

The roots of this design go back a long way, but the genre had something of a resurgence with Tech 21’s Flyrig, designed to be just that: a rig that could fly in your guitar case while you were sitting in economy class.

Mooer has looked at that concept and released its own take. The resulting Red Truck is eminently portable (and even comes with a cute lightweight carrying case) but has more effects, extended connectivity and the ability to store and recall a small number of presets.

There are five footswitchable effects: analogue drive, distortion, and digital effects for modulation, delay and reverb. There’s also a boost section at the start of the chain, selected via a toggle switch. The modulation effect offers a choice of tremolo, phaser or chorus/flanger while the delay has digital, echo and analog. A sixth footswitch offers tap tempo for the delay and modulation, together or independently, and can also call up the onboard tuner.

There are two modes available: Live, which you can use just like you would five individual pedals; and Preset, where the five footswitches can call up any combination of active effects that you have saved. This is not an entirely closed system either as you can add your own pedals via an effects loop located in the signal chain between distortion and modulation: it’s always active so you have to use the connected effect’s own footswitches.

While the RedTruck is perfectly at home in front of an amp (or two amps if you use the stereo output), those send and return sockets also allow you to use the four cable method of connection, whereby you can have boost, drive and distortion in front of your amp while modulation, delay and reverb are neatly placed in its effects loop.

Further flexibility is added by a stereo headphone output with cabinet simulation which, besides offering silent practice, can deliver a stereo signal to a mixer or audio interface for recording. The Pure Boost offers up to 20dB of clean boost, switched in by a toggle switch.

It’s disappointing, however, that footswitching is not available because it’s a classy sounding boost that can give a real kick to the front end of your amp or add extra power to the Red Truck’s Drive and Distortion sections.

With a degree of enhancement via Bass and Treble knobs, we’d be tempted just to leave it on all the time simply for that. The ‘Truck’s Drive section is based on Mooer’s Rumble Drive, which is said to be a Dumble-influenced pedal.

To our ears it delivered amp-like overdrive in the Tubescreamer ballpark with a similar enhanced midrange. For more dirt, this time with a Brit amp flavour, the distortion section offers raunch up to full-on stack sounds with tonal sculpting via treble, mid and bass controls and a mid boost for added girth. So far so good.

The modulation section is quite versatile, with its three different effects and a level knob to adjust the amount added to the dry sound as well as the usual rate and depth knobs. The tremolo isn’t the soft and rounded sine-wave throb of a Fender amp but has more of an aggressive on/off square wave vibe to it while the phaser delivers in a 1970s MXR orange box-style, and the chorus/flanger has some lush sounds including a very nice rotary.

Delay is basic but practical - the three variations offering different angles on how the repeats fade away - while reverb has plenty of variation up to large ambient spaces with the added spice of both modulation and a shimmer effect.

Collectively, the six effects give you a pretty practical pedalboard to use conventionally, but you get a bonus with Preset mode when you want to  bring a couple or more effects in at the same time - perhaps distortion with a  touch of delay for solos, for example.

This could be the perfect halfway house for someone who wants to eschew individual pedals (board-mounted or not) for the convenience of an all-in-one unit, but doesn’t want to go the full digital route  with a massive floor unit.

The Red Truck is also a convenient standby unit that  can travel to gigs in your guitar case,  ready to be plugged into the PA if your amp fails, or even be your sole piece of ancillary equipment if travelling light is an absolute necessity.

As always with this type of unit, the drawback is that you are stuck with one set of sounds from a single manufacturer which may involve some compromise. For example, you might love the sound of the drive but think the distortion is a bit meh.

To be fair, though, Mooer has actually endowed it with usable sounds that have broad appeal and you can always add a couple of your own pedals, although that may defeat the object if cutting down onstage clutter is your goal.