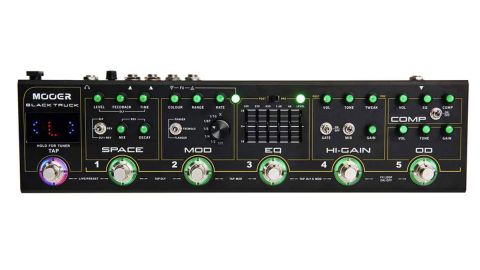 A self-contained pedalboard offering many options for use onstage and at home.

Last year we took a look at Mooer’s Red Truck - a compact pedalboard that could fit into your guitar case and be used in front of an amp, straight into a PA as a complete rig for travel or backup, or for silent headphone practice.

But now the Chinese company has brought out the Black Truck, which follows that original mould but offers a different selection of effects along with some updated facilities, including a volume knob on the speaker-emulated headphone output.

The unit comprises several of the pedals from Mooer’s Micro series, but is designed primarily for hard rock and heavy metal musicians. A newly developed amp-like Hi-Gain distortion has been added to the array alongside a compressor, overdrive, graphic EQ, Modulation effect with a choice of Phaser, Tremolo or Flanger, and a ‘Space’ section that offers Delay, Reverb or both together. You also get an FX loop for adding your own pedals, plus a tuner and a tap tempo switch that’s applied to the Space and Modulation sections either together or separately.

For a unit that sports so many effects, the Black Truck is a really compact device.  It could easily slip into a guitar case or gigbag, but doesn’t feel cramped, with the footswitches a practical distance apart and the use of smaller knobs offering an uncluttered feel. The only effect on the board without switching is the compressor, which is fine as it’s a useful signal thickener and probably something you’ll need always switched on. The OD is derived from Mooer’s Green Mile circuit and is a typical Tube Screamer-type drive.

Next up are the Hi-Gain distortion and EQ sections. The distortion can get extreme, but, while capable of amp-like metal and hard-rock sounds, there is the possibility of coaxing lighter drive and distortion sounds from it. This is because the EQ has the option of sitting before or after Hi-Gain in the chain offering real flexibility in how it is shaped (a Pre setting with reduced mids tones things down considerably). While the graphic EQ section is powerful purely as an EQ (with its five sliders addressing the most pertinent frequency ranges for electric guitar), it can also be used as a boost with up to 18dB courtesy of its level slider.

Before the Modulation section is the effects loop for adding external pedals. It’s switched in and out with a press of footswitches 4 and 5, so you can put extra pedals out of the way, if desired. The Modulation section gives you a choice of Phaser, Tremolo or Flanger, all with adjustable rate, but also has Colour and Range parameters that are different for each effect.

Phaser and Flanger offer impressive vintage tones, while the Tremolo has adjustable waveform so you go from soft amp style to harder edged and staccato. We’ve seen Mooer’s ambience effects recently in their Ocean Machine and the Space section gives you a taste of that when you have reverb and delay active together. It can run from adding a sense of airiness or a touch of slapback to massive ambiences, adding a sheen to the range of tonal possibilities the Black Truck delivers.

The default use of the unit comes with its Live mode that has five footswitchable effects side-by-side. It also has a Preset mode accessed by footswitch 1 and the Tap Tempo footswitch simultaneously. This assigns footswitches 1 to 5 to the five presets - these are not presets that store parameters, but merely offer different combinations of active effects with the knobs still offering the parameter value commensurate with their position. It’s useful if you want to, say, switch overdrive and a delay in together, or have your effects loop included on a single footswitch.

While it’s true that the Hi-Gain section is aimed at the heavier end of the guitar tone spectrum, that doesn’t preclude it from being an extra flavour of distortion for other genres. The fact the rest of the effects are more universal in their application makes the Black Truck a valid alternative to either a large digital floor processor or a conventional pedalboard with distinct portability advantages over either.