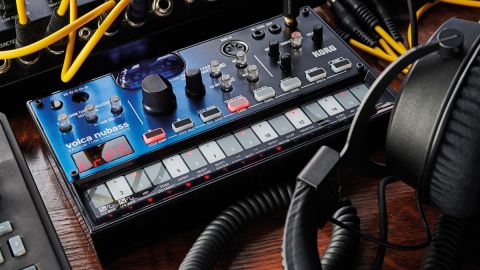 The Nubass is a decent bass synth and an excellent source of acid riffs, but we’re not convinced by its central gimmick.

For their price and size, Korg’s original trio of analogue Volca instruments were all fairly revolutionary at the time. Six years on though, it’s definitely the Volca Bass that has aged best.

Now Korg have brought us an update of sorts - the Volca Nubass - making use of some eye-catching new technology. The Nubass gets its name from Korg’s Nutube tech; a modern take on the classic vacuum tube using a fluorescent display.

Here, this is used to produce the main oscillator as well as add saturation to a sub oscillator. This marks the main difference in setup between the Nubass and its predecessor. Whereas the original Volca Bass had three oscillators that could be played and tuned independently, here both the oscillator and sub track the same pitch, with a single tuning rotary providing +/- one octave of range for both.

As with the oscillators of the Volca Bass, the main oscillator is switchable between square and saw waves. The sub osc, meanwhile, has volume and saturation level controls.

The filter here is a transistor ladder low-pass with cutoff and resonance controls. At low resonance, it’s smooth and great for rounded, subby basses. With the resonance cranked, it becomes aggressive - perfect for brash club sounds.

The Nutube tech used in the Nubass is developed by Korg and the Noritake Itron Corporation. Like a traditional triode tube - or valve, to us Brits - it uses an anode, grid and filament, but here that’s created using a vacuum fluorescent display. This creates a cool visual effect as well as generating sound. It also requires less power than a classic valve amp, so the Nubass can still run via battery power, as its Volca siblings do.

This is the first time Nutube has appeared in a synth, though Korg have previously used it in several guitar products, as well as the effect section of 2017’s Vox Continental revival. Here, two tubes are used - one for the main oscillator and a second providing sustain for the sub oscillator.

The LFO, meanwhile, can be switched between triangle and square wave shapes, has controls for rate and modulation depth and can be routed to filter cutoff, amp or oscillator pitch. The LFO has a sync option, too (actually a retrigger setting rather than standard tempo sync - ie, with sync on, the LFO will retrigger with each new note played). This goes some way to make up for the lack of amp envelope, since the LFO can effectively be retooled as a very basic AD envelope generator.

The attached step sequencer features both accent and slide functions, too, which both help to add movement and variation to basslines. Accents can be applied to individual steps, with three levels available for each step, plus there’s a front panel control for adjusting the overall strength of all of these at once. Accents affect both the amp volume and depth of envelope filter modulation.

The slide function can be used to tie sequencer steps together, preventing the EG or (sync’d) LFO from retriggering and applying portamento to pitch changes. There are two levels of slide that can be applied to sequencer steps - short and long - dictating the speed of the portamento effect.

Other standard Volca sequencer tools reappear here, too. These include Motion Sequencing, which allows for automation recording of the front panel controls, plus Active Step, whereby individual sequencer steps can be switched on or off mid-performance. There’s a Transpose feature included, too, allowing individual steps to be shifted up by either one or two octaves. Both the Transpose and Accent functions can also be randomised: great for inspiring instant acid house riffs.

The final element in the Nubass’s signal chain is a stompbox-inspired analogue overdrive. This has drive and tone controls, the latter adjusting how much high-frequency content there is in the final signal. The drive is good for adding extra ‘oomph’, but we’d have liked more from it - at full drive it does add nice extra harmonics to the sound, but never goes ‘full grit’.

This is the story of the Nubass in general; with its boast of tube-powered innards and analogue drive, you’d expect serious distorted power, but even with everything fully cranked it never quite delivers it. It can do grit, but the filter does the heavy lifting here. With its crisp, metallic resonance paired with the simple EG, slide and accents, the Nubass does a great 303 impression.

In all honesty, we’re unconvinced by the central premise of the Nubass, though. While it doesn’t sound bad, we’re not sure what the tube-powered oscillator adds next to, say, the standard VCOs found on the Volca Bass. And while the sub oscillator saturation does add something, the effect is subtle. With level and saturation turned to max it adds audible weight to the sound, but at lower levels it’s hard to hear variations in saturation.

When directly compared to the original Volca Bass, you lose almost as much sonic power as you gain - with its three independently sequence-/tunable oscillators, that synth could achieve paraphonic and detuned sounds unavailable here.

All that said, this is a solid-sounding, fun bass synth, and a great budget-friendly 303-alike. In this way, the Nubass can certainly be seen as a good purchase. Those expecting something grittier and more eccentric may be disappointed, though.