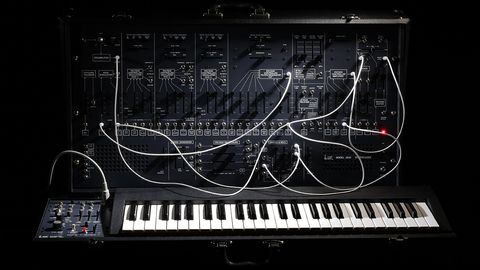 A loving reissue of a synth legend, Korg's ARP 2600 FS gives modern electronic musicians the chance to experience a brand new ARP 2600 with none of the quirks (or costs) of a vintage unit.

Released in 1970, ARP’s original 2600 was an attempt to present a complete electronic music studio in a portable, self-contained unit, offering a pre-patched signal path that could be reconfigured using 3.5mm patch cables. It went through numerous revisions (most notably changes to the filter and colour schemes) remaining in production until 1981. Now Korg has reissued and (subtly) expanded the synth for 2020, complete with all its original features and a few modern additions.

It’s hard not to see this one as inevitable, though it took longer than expected. When Korg’s variants on ARP’s venerable Odyssey were released, speculation began almost immediately: when would the company trundle out its version of the mighty ARP 2600?

That was five years ago – time for most of us to give up on the dream. Well, now that dream is a reality and though Korg’s Odyssey is a lovely little thing, it in no way prepared us for the majesty of this mighty modular monolith.

Right out of the (massive) box, it’s apparent that this is no cheap imitation. The original ARP 2600 came built into a Tolex-covered cabinet and so too does this version. However, that – and its similarly-housed companion keyboard – are tucked into a rugged flight case. Be warned: it is extremely heavy. Happily, casters are included, packed into the 2600’s lid.

Once removed from its protective shell, this new ARP is revealed to be almost the spitting image of the original, having only the slightest differences. There are minor changes to the hardware – sturdier handles, for example – adding to the impression that this is an improved edition, rather than a knock-off.

For the most part, it looks as if fifty years of technological advancement have all but been ignored, save for the presence of MIDI and USB connections on the left side of the case. Closer inspection reveals that the Cinch-Jones connectors used to connect the original main unit to the 3620 keyboard have been replaced by 8-pin DIN jobs. Likewise, the power connector on the right side has been swapped out for a familiar IEC connector. A pair of XLR outputs are also included in addition to the 3.5mm outputs on the front panel. The only 1/4" output is reserved for headphones.

Korg informs us, however, that despite being nearly identical on the outside, the re-issue’s inner workings consist of a combination of through-hole circuits along with modern surface-mount technology.

Comparing a brand new instrument to a hoary old vintage model is something of a fool’s errand. Electronic components age and fail, are replaced and re-calibrated (or not). It’s almost a cliché to say that no two analogue synths – even those of the same model and vintage – will sound alike, and that applies more so here.

Nevertheless, we had a genuine vintage MkIII on hand during the review period, and we couldn’t miss the opportunity for comparison. The MkIII exhibited the usual signs of age: scratchy faders, clunky keyboard action and the occasional tricky jack. Tuning was stable, but calibration was long overdue.

It was therefore somewhat surprising to discover that similar parameter settings on the two units more often than not produced nearly identical tones. Most of the discrepancies could be addressed by nudging the faders ever-so-slightly on one or the other instrument.

At first, it seemed that there were no real differences in the filters on the two units, despite the fact that the Korg was switched into its type II position. Upon closer inspection, it became apparent that we were hearing the results of poor calibration of the older unit’s filter and keyboard scaling. When we accounted for these differences, many of the discrepancies vanished. Naturally, there were still some minor differences. This may be due to ageing components on the original, or a notorious design fault that needlessly pared the later 2600’s filter frequency range down to 11kHz. We asked Korg if the fault had been addressed in the repro, but got no definitive answer.

Comparing envelopes was difficult, as the MkIII had modifications to both the ADSR and AR circuits, with switches added to extend envelope times. That said, the envelopes on the Korg version seemed slightly snappier than those on the old MkIII, even when the latter’s envelopes were switched to their shortest settings. We found that this was particularly evident in the attacks.

The new unit’s spring reverb makes its presence known in a way that the MkIII’s does not. While they share the nasal, metallic tone typical of small spring-based devices, the new model’s reverb is more obvious. There is reason to expect such – the MkIII used a smaller reverb tank than the older 2600s and Korg has clearly chosen to include the larger one.

While the new keyboard’s umbilical connector can’t be plugged into the old 2600 (or vice-versa), it is possible to interconnect the two synths using patch cables. The gate voltage produced by the new machine is slightly higher, but not so much that it causes issues. The 2600 has always expected higher trigger and gate voltages than other synths and this hasn’t changed. This means you might have to adjust the output of a connected synth or sequencer to get the desired results.

While it’s hard to find fault with this re-issue, nothing’s perfect. The MIDI implementation is beyond basic, with only note-on, off, and pitch bend transmitted via MIDI or USB cables. It would have been nice to see some allowance for velocity or MIDI sync for the arpeggiator.

Korg has had much success with their affordable, scaled-down repros of the ARP Odyssey and their own MS-20, and it’s all too easy to react with some disappointment that they didn’t tackle the 2600 with a similarly budget-minded approach. However, to do so would be to miss out on a chance to present electronic musicians with an honest-to-goodness re-issue of the 2600 in all of its legendary glory. And be assured, the company got it right – its new 2600 is a 2600. It looks and sounds every bit as gorgeous as the original.

ARP’s 2600 was not cheap in its day, and neither is this, yet the price is reflected in the astonishing quality on display. In an industry flooded with cheap, plastic toys, the 2600 is a reminder that synthesizers can be lovingly crafted to offer not moments of distraction, but decades of enjoyment and inspiration. You know, like the ones ARP used to build.

MusicRadar verdict: A loving reissue of a synth legend, Korg's ARP 2600 FS gives modern electronic musicians the chance to experience a brand new ARP 2600 with none of the quirks (or costs) of a vintage unit.