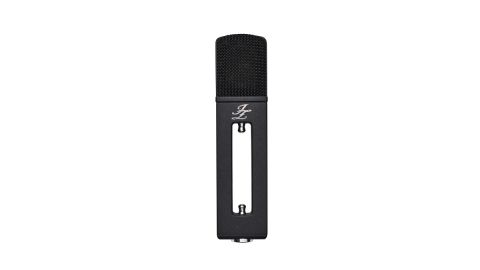 JZ offers no specific reason for the Black Hole’s rather novel physical design but the hole in the middle is put to good use for the mic clip, part of which sits in the body of the mic. It’s slightly springy so you squeeze it to slot it onto the mic’s mounting posts, and its rubberised construction means it also acts as an isolation device. In practice, we found it quick to install and quite stable. You can also attach it from either the front or back of the mic, handy when mounting it above things - drum kit overheads for example. On the downside it doesn’t offer much in the way of low frequency isolation from floor and mic stand rumble and an on-body low cut filter would certainly be welcome.

Although quite broad, at 22mm deep the BH2 is pretty shallow front to back and you can get in close to the capsule. Even right up close the proximity effect is not overbearing, but get in closer than about 10cm and you’ll see how sensitive it is to plosives. This is easily resolved with a pop shield, and even with that shield right in close it made a big difference. Even so, it’s clear the mic grille itself offers little wind protection.

Round the back, it has pretty decent rear rejection in mid and high frequencies, and the polar pattern is on the narrow side for a cardioid. The on-axis frequency response shows a modest lift from 2 to 6kHz, and again between 50 and 80Hz. Still, it’s a very smooth plot with no hype in high frequencies. This is borne out on vocals, which sound present but not overly airy.

As mentioned, the proximity effect is modest and this works very well when close-miking acoustic guitar. You’ll often find you’re tackling an inherent boominess and mic positioning can be tricky, but the BH2 handles the task well, plus the low self-noise is perfect when tracking quieter picked styles. Any condenser with a smooth top end is a good candidate for drum kit overheads, and much like JZ’s Vintage 67, which I also tested, the BH2 is a good choice.

Overall the BH2 gets a thumbs up. We have a few misgivings about the clip system and lack of low-cut filter but love the way it sounds on acoustic instruments and vocals, and that’s what really counts.