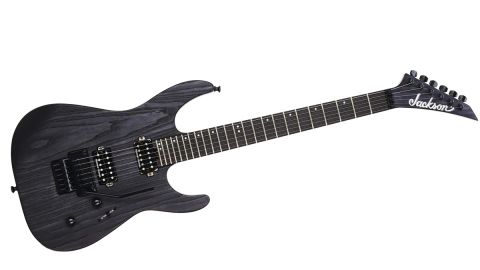 If you need a guitar with a tiny neck to get you up to speed go straight for the Pro Series Dinky DK2. Bicycle pump strictly optional.

Some guitars automatically transport you back to a time and place.

You can’t pick up an Olympic White Fender Stratocaster and not imagine Jimi Hendrix at Woodstock. A Gretsch Country Gentleman? George Harrison in 1964 at the height of Beatlemania. A yellowed Alpine White Gibson Les Paul Custom? Steve Jones, a knotted hanky, and the rest of the Sex Pistols in 1977. The list goes on...

For those of us who were actually alive at the time, a twin-humbucker, double-locking rock/metal/shred machine plonks us right back in the mid-to-late 80s. This was the era when guitarists were ‘gunslingers’ with a loaded six-string on their backs. They played for keeps apparently with a 22-inch waist, a bicycle pump thrust conspicuously down the inside leg, with hair like Tina Turner’s Mad Max Beyond Thunderdome fright wig.

The new Jackson Pro Series Dinky DK2 taps right into what dexterous widdlers of the 80s considered to be the ultimate six-string specification: a ‘super-Strat’ format with two direct-mount Seymour Duncans, a floating Floyd Rose vibrato, big frets on a flat ’board, and a pointy headstock on a neck you could slide under an airtight door.

Getting to grips with the Mexico-born Dinky DK2, the Strat-like body, albeit with sharper edges, is cut from ash which is coated in a Charcoal Gray finish. Jackson has allowed the finish to sink into the wood grain meaning you can feel every bump and crevice in the wood. Tactile you might say. Bottom line: it looks fantastic. The body is contoured for rib cages and beer bellies on the back, and ’round the front to accommodate your forearm.

The quality control in this thing is higher than Jon Bon Jovi’s wail. For example, the vibrato recess has a foam pad at the bottom to prevent noise when you pull up on the double-locking Floyd Rose FRT-O2000 vibrato. The pickup cavities are routed beautifully, playing host to a pair of direct mount Seymour Duncan humbuckers.

Let’s be honest. No one at Jackson lost any sleep over the choice of pickups here. Installing a TB-4 JB Trembucker in the bridge position and a SH-1N ’59 at the neck has become a rock guitar cliché. The good news is, this setup still offers the best combo of power, clarity and tone in our opinion so we’ll greet it as an old friend.

Moving along, the 648mm (25.5-inch) scale DK2 features a super slim bolt-on maple neck topped with an ebony ’board with 24 jumbo frets and a 305mm to 406mm (12-16-inch) compound radius. The neck is described by Jackson as a one-piece but it features a scarf joint. For the uninitiated, this means the neck is actually two-piece.

The headstock bit joins the main part of the neck at the third fret. This construction method has been used on metal guitars for decades. Some say it promotes neck stiffness, others that it’s more cost effective for manufacturers.

We reckon it’s a combination of the two. The neck is further strengthened by internal graphite rods. Flip the guitar over and you’ll find the neck is secured to the body with three bolts with some sculpting at the heel to provide great upper fret access.

The DK2 comes fitted with 0.009-0.042 gauge strings. That’s fine on the DK2 where the 648mm (25.5-inch) scale maintains some snap in the bottom strings. The Dinky DK2’s scale length makes the strings sing in every position.

The DK2’s five-way pickup switch offers in position 1, the bridge JB ’bucker; Position 2 splits the JB leaving only its inner coil in action. Position 3 voices the inner coils of both the JB and ’59; position 4, the neck’s inner coil only. Lastly, position 5 has the neck ’59 on full power.

There’s a lot of tonal variety on offer here. The JB in full-on mode has that classic blend of warmth and sparkle on a clean setting. Dial in some gain and you’re in classic rock mode for big riffs and singing sustain. The ash body seems to bring a lightness to the tone in all positions. There’s less muddiness in the neck position than we expected and there’s a sweet glassiness to the single coil settings. Don’t typecast the DK2 as a miffed rock beast. This guitar is just as happy keeping it clean.

If we learned anything from the explosion in guitar design in the 1980s it was that big frets on a flatter radius ’board equals happy days for choke-free string bending. What many of us also realised since the golden age of lollipop stick-necked metal machines is the amount of wood in your palm doesn’t necessarily impact on your fretting speed. Big necks can be just as fast.

The super slim neck profile on the Dinky DK2 is an 80s throwback then, and the feature most likely to divide the opinion of potential investors. That’s just personal preference, of course. You’ll know which camp you’re happiest in.

Even though we were surprised to discover that you don’t get a gig bag for your 800-odd sheets, the body wood, scale length, direct mount Seymours, floating Floyd, compound radius and ultra-stable neck distinguish the DK2 as perfect a shred machine as you’ll find at any price.