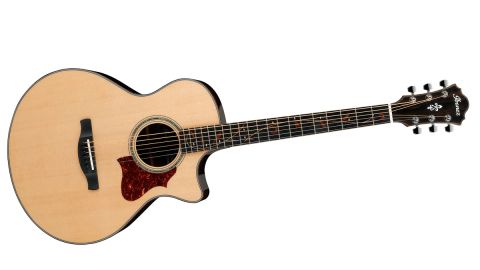 For a smidge under £600, you’re getting a superbly made instrument that is so much more than just another acoustic guitar.

Historically speaking, if there is one thing on the average acoustic fingerstylist’s wishlist it’s extended range.

Over the years they’ve tried just about everything, from simple retuning to the more elaborate prospect of investing in a monster harp guitar. Anything, in fact, that draws them closer to their main rival, the piano.

The baritone guitar is another potential solution, adding additional grunt to the instrument’s bottom-end with its BEADF#B tuning –or even lower, thanks to the extended scale length. And whereas this means adding yet another six-string to your collection, Ibanez has made you an offer that’s tough to refuse with its very affordable AE255BT.

The company’s AE range covers a wide price spectrum, from just over a couple of hundred pounds to over a grand, but despite its somewhat specialist nature, the 255BT comes in at £599 with some online suppliers charging considerably less. It all adds up to a splendid deal for anyone who is even slightly baritone curious.

Casting an eye down the spec sheet of the 255BT, it’s possible to see that Ibanez has produced something that not only looks the business, but is completely CITES-friendly, too. As manufacturers struggle with the ongoing restrictions on some of the feted traditional tonewoods - Brazilian rosewood being a spectacular example - it’s good to see a well thought out and functional cocktail of timber present here.

For starters, we have a solid Sitka spruce top that sits astride ovangkol back and sides. Ovangkol is a sustainable tonewood that is known as being a relative of rosewood that hails from West Africa with an attractive grain pattern and a sonic reputation for a full midrange and nicely turned out highs. We suspect that its presence here is in the form of a laminate, so we’ll see shortly what exactly it brings to the party tone-wise. In any case, this guitar is a looker.

Moving on to the neck we find another possibly unfamiliar contender, Nyatoh, a rainforest wood that is similar to cherry, native to southeast Asia and, again, fully sustainable. The 255BT’s fretboard material might raise the odd eyebrow as the spec tells us that it’s made from “cultured maple”, and to save you a Google search this means that it’s effectively a maple and epoxy mix that is hard wearing, reputedly dead-spot free, with the feel of ebony.

Notice here that Ibanez has decorated its fretboard with a wooden inlay in the form of a multi-coloured vine - it’s an attractive addition and, at this price point, a surprising and nice touch. Other highlights include scalloped X-bracing, walnut body binding, an abalone and maple rosette, bone nut and string saddle and Ibanez’s own T-bar under-saddle pickup. You have to admit that, so far at least, there’s a lot here to like...

Obviously, if you’re going to be tuning down in the direction of a bass guitar, you’re going to need an extended range and the 255BT has exactly that with a tally of 686mm (27 inches) from nut to bridge. Accordingly, the frets are very slightly further apart, but we found that any adjustment in terms of left hand fretting was practically instant, even the weightier strings - 0.016 to 0.070 - didn’t cause us too much of a worry, either. It’s surprisingly light and quite well balanced in the hand, without the neck heaviness that sometimes accompanies longer range instruments.

The neck has a satin finish to it, with a comfortable C-ish profile and a flat 400mm (15.74-inch) radius. Further facts and figures on the 255BT reveal that the fingerboard width at the nut measures in at 45mm, broadening to 56mm at the 14th fret, with a depth of 21mm at the 1st fret and 22mm by the 7th.

Musically speaking, a baritone is tuned a 4th lower than standard tuning - and feasibly you could take it to even more subterranean depths if your artistic leanings demanded it. But a low B is probably enough of a culture shock to be going on with in the early stages, at least. The first thing to note is that this guitar is not for strumming in the conventional sense. Idly stroked campfire chords can sound far too muddy down at the nut, for instance, and it’s necessary to adopt the mindset that you now have an instrument where treble and bass are separate entities.

This makes a baritone acoustic a bolt-hole for fingerstylists who are already used to this discipline and a quick YouTube safari investigating the baritone stylings of players such as Andy McKee and Thomas Leeb will amply illustrate what we mean.

With that in mind, the 255BT can take on a majestic musical pose with strident basses and sweet-sounding trebles at your disposal. It’s not a loud instrument, but what it has is a good balance across its range with the low- and high-ends never indulging in a battle for supremacy. Treated right, that quest for an extended range is within your grasp.

Another nice touch here is the presence of an under-saddle pickup in the shape of Ibanez’s own T-bar design that has an integrated preamp powered by two 2032 coin batteries located in a little drawer stowed under the endpin jack socket. There are no controls - treble, bass and so on - available to the user, meaning that live performance would necessitate the player investing in some form of external preamp as an alternative to the slightly more seat- of-pants option of trusting your art to a DI box and a front of house soundman. The pickup does its job ably - what you hear acoustically achieves widescreen status via an amp.

The main question here is one of bang for buck. For a smidge under £600, you’re getting a superbly made instrument that is so much more than just another acoustic guitar. It’s a musical challenge to experiment with a different voice to see if you can tease some inspiration from its strings and burrow down into that netherworld that has previously only been available to bassists and keyboard players. We think it’s a winner - and, at this price, practically irresistible!