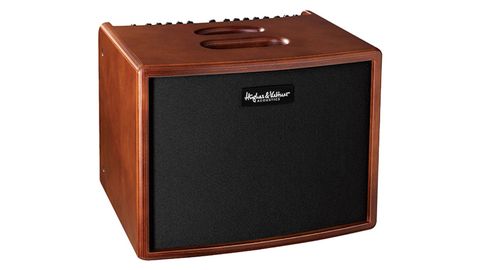 No signature tonal style here - just a clean, professional rendering of your guitar, but louder.

Nothing is more oxymoronic than an acoustic amplifier.

By their nature they shouldn’t exist. This odd dilemma filters down to their reputation in the music-verse. They tend to crackle, hum and give a variety of sounds that don’t quite match the sound of the instrument you’re playing.

Good ones might provide some subtle effects to aid your musical performance, while others produce a sound so far from the original instrument that it’s like playing in unison with a crinkled, distorted doppleganger.

A recent collaboration has sought to change this, though. Hughes and Kettner (known for producing high quality digital signal processing) joined forces with audio-technologist-cum- engineer, Michael Eisenmann (a former member of the team at AER, who helped design the acousticube) to develop Hughes and Kettner’s first acoustic amplifier.

Eisenmann describes Era 1 as, “an extremely versatile tool for amplifying acoustic instruments, even for complicated instruments like the violin and perhaps even traditional Asian instruments, which is a big market. It takes the concept of being small, loud, easy to use and very dynamic to a whole new level... it uses a closed speaker system - one that doesn’t produce the noises commonly found with bass reflex designs.”

The whole concept behind this Hughes & Kettner Era 1 model is that it amplifies the natural sound of the acoustic guitar. A spokesperson from music and sales, a company which aids in the distribution of the amplifier, says, “We aim towards a customer who usually shies away from amps as she knows they colour her tone too much. The Era 1 does not! The EQ/mode works a certain way (not at all like a normal EQ - much more subtle as we want to keep the natural tone of the guitar being used).”

The model we have has a dark, wooden finish (though black is also available). It comes with a plush carry bag, which has a pocket for the power cable, and a tilt stand so you can angle it skywards. The design is extremely tidy. The handle is sturdy and chunky, but the weight of the amplifier is significant. We wouldn’t want to carry it too far with a guitar in tow as well.

A little inset ledge at the back of the top is the sound control station. It offers two channels, both of which take two completely different sources (xlr and 1⁄4 jack) and render them both individually.

There are 16 FX settings, which are detailed in the instruction manual, though not described on the amplifier itself. While this adds to the minimalist, austere aesthetic, it does mean, initially, you will be glued to the manual ascribing the sound to the setting - though the FX offered are of the standard variety.

This may sound a little worrying for those in performance environments who might need to switch distinct sounds quickly between tracks on a darkened stage, but there is the option to programme in your own sound.

On the back of the amp it has outputs for mixing desk, phones and another line. In addition there are inputs for tuner, footswitch, FX loop and more. It’s all very comprehensive.

As recommended by one of the team at music and sales, we test the amplifier with a similarly priced instrument. The UK retail price for Era 1 is £1189. Our seagull of choice is a Furch G21 SW on sale at £1235.

Without any amplification it has a huge, bright and natural sound so it almost seemed a shame to add amplification. When paired with the Era 1, it’s outstanding. The sound was so precise it was like the amplifier vanished into the ether. There’s plenty of volume from the Era 1 too, perfect for pub gigs all the way up to a medium sized concert hall.

When taking the FX through their paces the Furch responded amiably. We won’t describe all 16, but the presets cover the most well-known sounds from reverb, delay, chorus to flanger - with a few variations thereof. They give you enough variety to be playing well into the small hours without losing interest and the FX volume dial lets you turn the effect down if it’s too much for you.

Of the 16 presets, my highlights include: ‘Delay short’, which produces a sweet blues sound, emphasising just the right amount of buzz; an atmospheric ‘Reverb Hall Bright’, though i wouldn’t recommend chordal playing in this mode (stick to solos), and ‘Flanger + Delay’ (my least favourite sound) in which everything we play sounds a microtone out (and then, as if we’re being tortured, we have to hear it again).

Online there are some superb examples of how these presets can best be wielded and it’s well worth checking out. One slight glitch in an otherwise faultless FX setup is that two of the ‘Delay’ presets cannot be used separately on both channels and the FX volume affects both channels. What situation would require two bespoke delay effects we’re not sure, but it’s probably worth mentioning.

While these presets might add something extra to your performance, and are as high quality as we can tell, the most impressive sound for me is without any effects (or with perhaps an ounce of reverb). Its neutral playing ground lends itself well across multiple genres of playing, classical especially, but more on that later.

Where the amplifier excels in audio excellence and mimicry of your guitar sound, this is possibly also its greatest downfall. We pick a reasonable budget guitar: in this case a Sigma Coome retailing at £225. Without amplification it seems fine, possibly sounding a little more than it’s worth. But the Era 1 laid bare its dynamic range, even picking up on a more boxy, closed sound, hidden when played without such accurate amplification.

The effects helped to mask the limited dynamic range but there’s only so much reverb effect you can put on before you’re drowning in your own sound. Therein lies the rub.

Harking back to Michael Eisenmann’s comments about the variety of instruments, which can be used with this amp we also try it with a Freshman cedar ukulele and a Cordoba Fusion spruce nylon-stringed guitar.

The Era 1 picks up on the finer nuances of the uke sound, recreating the natural percussive treble with relative ease, though we did push the bass slightly in the EQ on the amp. The Cordoba combined with the Era 1 fulfills one of our main ambitions in life - playing in a cathedral venue (by maxing out the Reverb church preset).

The nylon strings, however, don’t feel as immediate as steel strings and we wonder whether putting a microphone to the guitar might yield better results. Referring back to manual we’re tipped off that nylon strings sound better on channel 2, so we switch. The results are worth it.

This amp is designed for the advanced instrument. Budget models won’t get the most from its sophisticated capabilities. By extension this amp is probably more for the advanced player, or an aficionado with the traditional and accurate acoustic sound in mind.

The two channels are extremely useful components on this amplifier. It can become the engine for two sparring musicians, the troubadour travelling tool, or the device to boost your acoustic sound in a large ensemble.