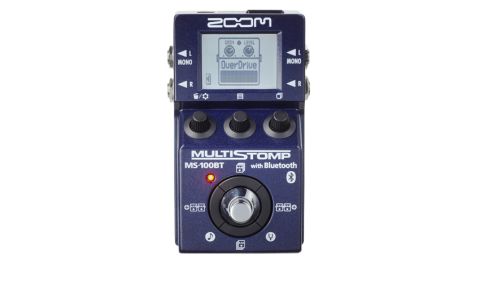 The most practical, cost-effective way to expand your pedalboard by adding a single pedal.

Hot on the heels of the MS-50G, Zoom unveils another stompbox sized multi-effects pedal, the MS-100BT.

Such is the pace of change these days that Zoom's latest multi-effects effort comes mere weeks after we saw the company shake things up with its MS-50G, a multi-effects pedal the size of a normal compact pedal.

This time around, Zoom has not only crammed almost twice the number of effects into the same chassis, but also added the facility to add even more amp and effects models via an iOS device, in a similar fashion to DigiTech's iStomp pedal.

But where the iStomp is fed via a hardware cable, the MS-100BT loads its models through a wireless Bluetooth connection. A free app, StompShare, provides a virtual effects shop with a range of stompbox effects that you can try out, purchase and add to your MS-100BT to be used like any of the pedal's pre-loaded effects.

Physically, the MS-100BT is very close to the MS-50G, apart from the Bluetooth window and the addition of an extra input jack, making stereo input possible. Reassuringly solid and slightly larger than a Boss compact pedal, it runs from a pair of (supplied) AA batteries or from a nine-volt supply with 500mA of current.

The unit also features a 4mm by 3mm LCD display allied to three push-and-turn 'soft' knobs, with a four-way cursor surrounding the main footswitch. Although this interface may sound a little complicated, it makes editing surprisingly easy.

The MS-100BT has 50 patch memories, and there are 92 effects models of many varieties (rather than 47 in the MS-50G) to complement the eight amps, which include Fender, Vox, Marshall, Two- Rock, Diezel and Engl models. Up to six models can be used simultaneously in a patch in any order, though the actual combination of models depends on the amount of digital signal processing available.

Using the StompShare effects shop is straightforward. Without an MS-100BT in sight, you can check out the pedals and amps and easily audition them - each has a demo, featuring guitar playing with band backing.

Connecting iOS device and pedal is a matter of going to the Bluetooth menu on the pedal, selecting 'pairing', and allowing the Bluetooth on your iOS device to find the pedal so it can make a connection. After the initial pairing has been made, the pedal connects automatically when it's powered up.

Once a connection is made, you can tap the effect you wish to buy to bring up its info screen, press the Try button on any effect or amp, and you will get a 15-minute trial, which allows you to adjust parameters and create tones in combination with your other effects, although you can't change patches during this time. If you want to buy the effect or amp in question, you simply press the Buy button, follow the onscreen instructions and load it permanently onto you pedal.

At the time of writing, there are about 20 effects available, but Zoom says that additional effects will be made available periodically. Current prices seem very reasonable, with amps at £1.49, and effects at 69p. There are some models in the shop (Tube Screamer, Big Muff, Marshall 'Plexi') that are variations on what's already in the pedal, but there are also many well-known names that don't come included.

Some of these include the Klon Centaur, Electro-Harmonix Small Stone and the Echoplex EP-3, which would all make welcome additions to an already very playable range of sounds, whether you are setting up patches that are true multi- effects with several models chained together, or just going for a single effect in a patch that you can use alongside your set of existing pedals.

For onstage use, if you have your patches set up in a familiar order, it's an easy enough job to change patches between songs by simply bending down and pressing and scrolling the centre knob, but we also like Zoom's inclusion of the facility to assign presets in alphabetical order and scroll through them with the footswitch.

We thought the MS-50G was something special when we reviewed it a few months back, but the MS-100BT adds more effects and a future-proofed flexibility that takes things up another level: definitely worth the extra outlay.