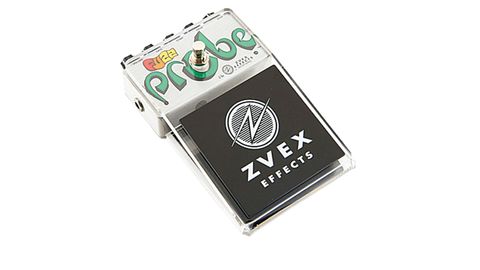 A brilliantly bonkers marriage of a fuzzbox with a theremin.

Z.Vex's Probe series takes a pedal and adds theremin-like gesture control to it. The Fuzz Probe combines a Fuzz Factory with a copper antenna built into an acrylic plate.

Wave your foot around near the plate and you'll disturb a field of RF energy coming from the antenna, altering the circuit that generates it.

That circuit, via the brightness of an LED and photoresistive cell, controls the stability knob of the Fuzz Factory.

If you stay clear of the antenna (the energy field extends to about two inches) the Fuzz Factory works as normal with its massive range of fuzz sounds, including a whole arsenal of screaming feedback.

It's in that screaming that the Probe comes into its own. Determined by the setting of the stability knob, you can wave your foot around for police car sirens and faux-theremin squeals.

A Fuzz Factory with an expressive extra layer of madness: great for freaking out at the end of songs. We like it a lot.