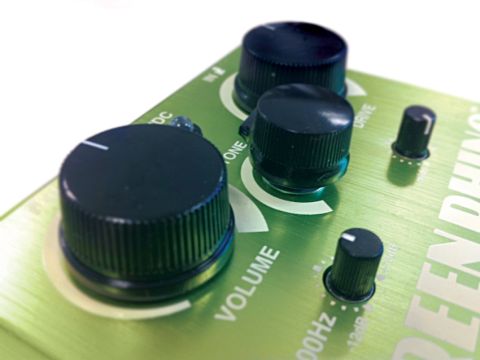 To paraphrase This Is Spinal Tap, the Rhino's big bottom really will drive you out of your mind.

Back in the '90s, effects manufacturer Way Huge had a cult following. When the business folded, many feared that killer effects like the Green Rhino, inspired by the classic Ibanez Tube Screamer, would be lost to the world.

Happily, Jim Dunlop Electronics resurrected the brand, and the Green Rhino MkII - actually the third incarnation - is one of the revitalised models to emerge.

Despite the retro heritage, the feel of this pedal is modern thanks to the two-millimetre-thick anodised aluminium chassis. The controls are smooth and solid, and the footswitch feels like it was designed to operate something important on an aircraft.

When you trigger it, you're instantly dazzled by an intense blue light. Has it been fitted with an anti-theft laser? No, it's only the LED that tells you the effect is activated, but it's very, very bright. If you like to perform amid a carpet of dry ice, this could be handy.

The Rhino also has true bypass circuitry, so it should be totally transparent in the signal chain when switched off.

Plugged in, the first few strums reveal heavy-duty tone. With everything set to halfway, the Rhino gives riffs impressive definition and warmth, while solos gain extra punch and sustain.

There are no irritating fizzy overtones - just powerful, clearly defined drive. Adding extra gain makes the sound wilder and more compressed, but at no point does it dissolve into a muddy mess.

The Rhino also shines when you wind up the volume but turn the gain down, allowing the pedal to drive your amp in a subtler, bluesy way.

It's the tone-shaping powers of the MkII that really set it apart, though. The 100Hz control allows you to cut or boost the low-end by a hefty 12dB. In practice, you'll probably turn this control up full and never turn it down again: it's like injecting Botox into your tone.

In play, it adds a fat dollop of whoop-ass to the icy bite of a Telecaster bridge pickup, while P90s become snarling, PAF-baiting monsters.

At more moderate settings, it adds warmth and body to your rig's sound without changing its basic character.

The Curve control allows you to subdue sharp edges in the upper mids, while a standard tone control adjusts treble. There's nothing fancy or mysterious about how it all works and you can get rock star results out of the Rhino in about two minutes.

Get your overdrive tone right and it'll hold the rest of your sound together. So although the Green

Rhino MKII isn't the cheapest 'drive, you may profit by the extra investment in the end.

It can do vintage rock to a T, but won't sound out of place in a modern indie setup either, while the extra booty-factor offered by the 100Hz control makes an already tempting package a real object of desire.