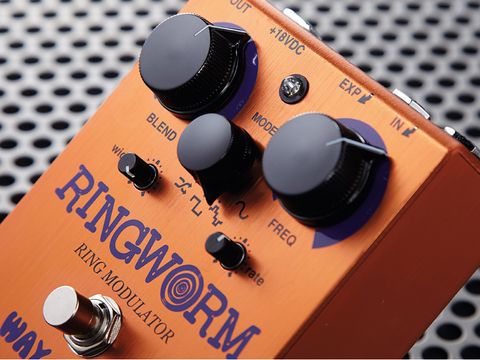 A solid competitor to the Electro-Harmonix Ring Thing.

The ring modulator, meanwhile, is the sci-fi-obsessed oddball that sits alone in its bedroom watching Star Trek, or at least that's the popular perception of this much-maligned effect. Its moments of glory in the work of Incubus, Neal Schon and Black Sabbath (try the Paranoid solo) are tarnished by endless web forums claiming that it's irritating, atonal, unpredictable and only ever sounded decent when used for the Daleks' "Exterminate!" catchphrase.

There's no room here to fully explain the science - and it'd only make your ears bleed anyway - but ring modulators basically work by taking your guitar signal, multiplying it with a second signal from an internal oscillator, and then relaying their sum and difference frequencies.

In the wrong hands, and with the wrong settings, the results can often be harsh and inharmonic - like a whole orchestra of bum notes. But used expertly, these units can produce beautiful, bell-like sounds and be both otherworldly and utterly refreshing in a world of identikit tones.

Way Huge might trumpet the Ringworm's "crazy freaked-out madness", but first-time ring-dingers may have some other choice words to describe this new analogue modulator pedal. During early experimentation, you might conclude it produces an unbearable and entirely random racket, sounding like a Whammy pedal that's been left out in the rain.

Stick with it, though, and you'll slowly start to master its features and learn which modes suit you. This beast can be tamed - it just takes patience.

Despite a tough and compact aluminium chassis that suggests live work, the Ringworm seems more geared towards studio boffins to us. It certainly packs in the features, with a five-position Mode dial giving you a choice over the shape of the low frequency oscillator's (LFO) soundwaves, as well as slightly fiddly controls for fine-tuning the sweep rate and pitch.

These are also controllable via an expression pedal if you've got your hands full and happen to own one. It's a solid range of options, but don't forget you're still paying £179 for a standalone pedal.

In application, you could argue that the Ringworm's most critical dial is the Blend, which sets the overall wet/dry level of the effect. Take it any further than halfway and you'll struggle to use this unit for any practical rock 'n' roll purpose, though.

Likewise, some of the Mode settings can be eliminated straight out of the box, such as the Random position, whose arbitrary jumps between seven different frequencies turn out to be hilariously useless in practice.

So, yeah, it's undoubtedly true that the Ringworm can sound terrible. But a little dabbling also unlocks some genius sounds.

With a dash of reverb on a more predictable setting such as Square Wave (which bounces between two frequencies), it stops you in your tracks, sounding like a funeral organ at the low register and giving the impression that a second guitarist is playing under you when you climb higher up the neck. It's important to stress that playing style is a factor too, with single notes working better than chords.

The Ringworm is capable of producing some diverse sounds: from crazy, synth-style funk through to mind-melting electro noises. It's a stretch to describe this pedal as essential, but the Ringworm is a maverick's dream - and far more fun than the fungal skin infection of the same name.