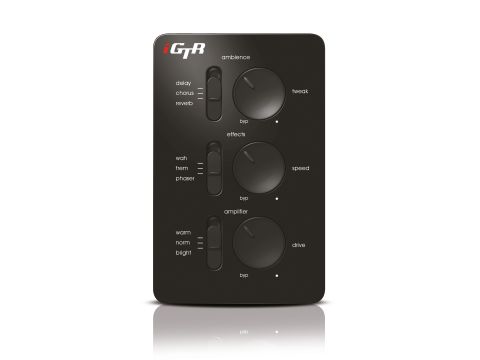 If you want to practice with a full sound wherever you might be, the iGTR will certainly do the trick.

Waves' iGTR is a natural spin-off from the technology that powers its GTR3 software, and is designed to give guitarists an iPod-sized practice tool that can be used anytime, anywhere.

Powered by four LR6 type batteries, the iGTR can just fit into your pocket or sit in the supplied clip which will fit onto a convenient belt or guitar strap. If you're at home and want to save on the batteries, it can be powered from the mains via an adapter (not supplied).

There's a single jack to take a guitar signal but two stereo outputs for connecting headphones, linking up to a larger system or recording the output. A stereo line input is also provided should you wish to play along with the sounds from, say, an MP3 player.

Operation of the iGTR is dead easy, with just a volume control and three 3-way selector switches, each of which is coupled to a recessed knob for selecting and tweaking the sounds.

Switch one selects the amp model - Warm, Normal or Bright - while the adjacent knob sets the amount of drive. With the second switch you can dial-up one of three effects - phaser, tremolo or wah - with the speed of the effect being increased by the knob.

The control surface might suggest that the range of sounds is quite limited, but there are plenty of different amp/effect/ ambience combinations available plus variations on each.

Of the amps, the main differences between the three relates to EQ, with the emphasis being put on certain frequencies. Compared to the Normal setting, Bright is Fender-like while Warm has more emphasis on the midrange frequencies.

The pure amp sound may be a little too dry in your headphones but a touch of reverb dialled-in opens the sound out nicely. The delay effect can do the same trick but, as it's a ping-pong delay, can get a bit annoying in the cans.

The chorus, phaser, tremolo and wah are all quality effects that add interest to the sound, the wah in particular being a funky sounding auto model that can get really chewy.

The clean sounds and the more mildly-overdriven tones are the most authentic when compared to a real amp - iGTR's seriously overdriven sounds have a harsh edge to them. In an ideal world, these would be a bit smoother (like those in GTR3) but this would mean that the iGTR would have to be way more expensive. As it is, it's an affordable and neatly portable practice device that should find its way into quite a few guitarists' gig bags.