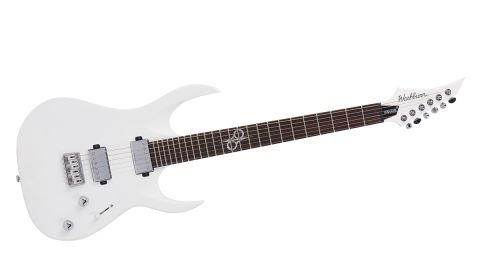 A well-priced, well-made guitar that works a treat for metal tones.

This latest addition to the Parallaxe range is designed in conjunction with YouTube guitar star and Feared and The Haunted axeman, Ola Englund.

It's not just one signature guitar either, but an entire series comprising three different ranges with varying bridge types and pickups (or a different body shape, in the case of the Solar V).

As you would expect from Ola, the range is aimed at the modern metal shredder, and our model features an alder body, maple neck and ebony fretboard with Ola's logo inlaid at the 12th fret.

And while none-more-metal black is an option, our model's matt white finish with chrome hardware gives it slick, sporty look. The reverse headstock looks cool but we find that, perhaps because of the angle of the pegs, tuning is a bit fiddly.

The most notable aspects of this new range are the huge scoops taken out of the lower and upper horns. Aside from giving the guitar a mean, weapon-like appearance, they give almost unencumbered access to the upper frets. Along with the almost-invisible neck join, it's one of the most effective designs we've encountered for addressing this common problem. The familiar-feeling C-shaped neck's matt finish and silky ebony fretboard also ensure that travel to and from this area is smooth, and very comfortable.

Onboard are two Seymour Duncan Solar humbuckers - the fruits of a collaboration between the Seymour Duncan and Ola. Given Englund's metal credentials, we plug in with one hand placed on the gain dial in anticipation of a serious swell of power.

And while that expectation isn't quite realised, they certainly revel in crushing high-gain rhythm sounds, tightening up the low-end wonderfully for full-octane metal riffs and focusing the tone even with inherently saggy high-gain Marshall sounds.

Open chords, in particular, sound huge - with almost bell-like clarity. Unfortunately, for lead work, there's a noticeable lack of brightness, and for technique- ridden solos, a slight shortfall in power.

That said, it's worth noting that for Ola, metal tone is all about pairing high-output pickups with a low-gain amp or, in his case, low-output pickups with a high-gain amp: his multi-gain stage-equipped Randall Satan. So, when it comes to employing his signature humbuckers in your own rig, your amp will need to provide the bulk of the grit.

Nonetheless, positions two and four on the five-way blade emulate sounds you would expect to hear on a Strat. The tones here are a tad thin for our tastes, but they do add some versatility to an otherwise proud rock guitar.

At £579, the Solar represents good value for shredders on a budget, but faces stiff competition from other shred-metal-friendly companies such as Jackson and Ibanez.

What sets it apart, however, is the consideration given to unbridled upper-fret access, so if you're spending a lot of time at the dusty end of the fretboard, then you should definitely give this a try.