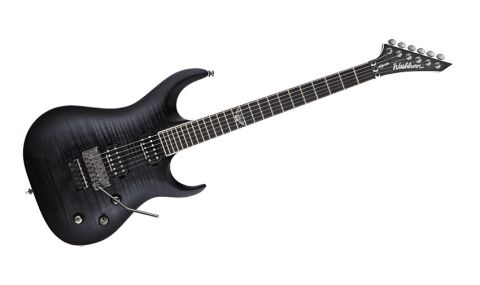 A genuinely impressive modern guitar, Washburn goes back to its rock and metal roots with gusto.

Although the brooding black shapes of the new Parallaxe series may not reveal it, in many ways, Washburn is a grand old lady of musical instrument manufacture. It began producing guitars in Chicago in 1883, predating Orville Gibson's patented archtop design by around a decade; Leo Fender wouldn't even be born until 10 August 1909.

Despite this long heritage, the firm's more recent output of electric instruments has often attracted the attention of the rock crowd, being popular with 80s shredders, most famously Nuno Bettencourt, and even being spotted in the hands of Brian May.

2013 sees the company at something of a crossroads as far as electric guitars go, as Washburn's Greg Heritier concedes:

"We've done a wonderful job on the acoustic side, but on the electric side, let's say that there's been somewhat of a lack of products. Nuno's N4 is still there, and we've done some great products with Paul Stanley, but the basic line was fading away." Enter Parallaxe.

Heritier was fundamental to the conception of the new series, which comprises a relatively small number of guitars intended to appeal to rock and metal players.

"In the 80s we had a really good share of the market, but when I started working with Metal Battle [a contest that supports upcoming metal artists] I came into contact with many bands and I wanted to get something together, some cool guitars that the advanced player would want to play.

"We changed things around a lot but finally we had the guitar we liked," he says of the R&D process.

"We wanted to keep elements of the Washburn history, things like the Stephen's Extended Cutaway and the pointy headstock, but we also wanted to go a step further, give players something that they could play and not have to modify. We didn't want to make it completely different to everything else, but we wanted to keep the Washburn touch, too."

In a nutshell, the Parallaxe range includes three basic designs that can be distinguished by their headstocks: the double-cut PXS (standard, reviewed here) has a classic six-on-one-side pointed example; the PXM (modern) has an asymmetric three-a-side affair; lastly, the PXL uses the PXM headstock and is named after a contemporary Washburn guitar, the Idol. L is for Idol? Hang on...

"With the PXL we thought a modern version of the Idol would be a cool thing to have," explains Heritier with a smile. "We wanted to change the Idol around a little bit, which is why we chose to take the headstock we'd designed for the PXM."

Configurations include a pairing of Seymour Duncan pickups with a Floyd Rose double-locking whammy, or dual EMGs with through- body stringing, and additional options such as a flame maple veneer, gloss or matt finishes and locking tuners where relevant.

Standard features across the board include the still revolutionary Buzz Feiten tuning system, baked ebony 'boards that bristle with super jumbo-sized frets and both bolt-on and set-neck versions of the Stephen's Extended Cutaway heel design. There's a seven- and eight-string, too, and best news of all, they're all priced below £1,000.

The double-locking Floyd Rose has been a staple of rock and metal since the early 80s and, great though it is, it can demand certain compromises: not so with the Parallaxe range. With the alleged tone-sucking properties of the Floyd in mind, the FR Original bridge used here has been refined to include a 36mm brass block rather than the more usual 30mm steel. This, in theory at least, will replace some of the tonal girth lost by the floating nature of the bridge, and it should increase sustain, too.

Tone-wise, the PXS20 is marginally more rounded than this reviewer's Charvel San Dimas. The difference is subtle - don't expect a Billy Gibbons here - but rock rhythms are nicely fat from what is a hot bridge pickup. Naturally, the mahogany body will assist in this regard, too; it won't all be down to the Floyd.

The two pots are both pull/push, allowing you to select either series or parallel pickup wiring, the latter option creating a more single-coil-like tone without incurring any hum. It's fair to say that the resultant tones aren't quite as glassy as those of a Strat, but at high gains, there's no extraneous noise to speak of. What's more, the problem of rattling vibrato springs has finally been addressed.

"We just inserted a piece of rubber into the centre of each spring and it works," says Heritier, justifiably proud.

"It's not rocket science; we were brainstorming after a lot of recording guys told us about how intrusive rattling springs could be. I'd want that in there even on a £199 guitar because it's such a no-brainer."

You can hit the PXS20's mahogany body and there's no sign of the hitherto jarring metallic rattle; that's not the case when inflicting the same level of violence with our Charvel.

We compared the feel of the Washburn with an LTD MH-1000, and both have necks we love. On one hand, the Parallaxe's massive frets and wide cutaway makes bespoke metal shredding up the dusty end a doddle, aided by the unique heel design, while the LTD's flatter radius, slightly fatter feel and marginally increased mass has its own undeniable appeal.

Allow us to sit on the fence here: both are perfectly suited to the tasks they're intended for while also offering sufficient subtle differences to allow players to make their own choice as to their favourite, just as it should be.

As well as representing a new chapter in Washburn's illustrious history, this guitar also provides yet another choice in what is an already crowed part of the market. Although it's priced slightly higher than, for example, both the LTD M-1000 Deluxe and Schecter Banshee, we can safely assume that the street prices would be much closer together. This, in turn, will leave the choice of which brand to opt for wholly in the hands of the player.

This Parallaxe models would suit any hard rock player down to the ground, and we particularly liked the PXS20's gloss neck finish and Floyd Rose. We hope you'll join us in welcoming Washburn back to the metal fold... where it belongs!