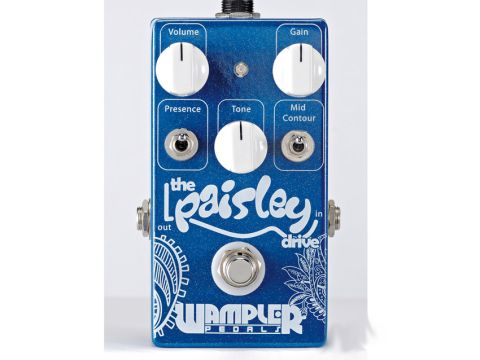 Dark and brooding to bright and punchy, the Paisley Drive is a superb all-round overdrive, whether you like Brad or not.

Think you know country guitar tone? That twangy Tele into a 'Blackface' Fender deal? Well do yourself a favour and listen to Brad Paisley, the genre's biggest current name.

Fans will already know his tones, but his choice of vintage Vox-inspired amps and Celestion Alnico speakers ends up in a more gainy, rich and rocky collection of sounds compared to classic Bakersfield twang.

An Ibanez TS-808 Tube Screamer fan of some magnitude, Brad has nevertheless been wanting something more from his mainstay gain stomper. And for that, he turned to widely renowned US high-end stompbox maker, Wampler.

"I knew that Brad was a huge 808 fan," explains company head honcho Brian Wampler of the all-new Paisley Drive's evolution. "We discussed how that type of tone could be improved on. I sent him several prototypes and Chad [Weaver, Brad's tech] would reply as to what he wanted changed, and then I'd tweak it a bit at a time."

The eventual result is this: a three-knob, two-switch pedal that begins in TS-808 vein, but that also offers considerable extra scope for increased clarity, reduced compression and improved dynamics, according to its maker.

You get a sturdy metal box resplendent with white graphics over a tough, sparkly blue, powder-coated finish. Pots and switches are securely chassis-mounted, and while Brad has his pedals in his rack and switches them remotely, this will feel as sure and solid under your feet as anything else.

The switch, signal and power jacks are mounted independently and wired to the circuit board, rather than fixed directly to it (unlike many cheap pedals), and the switch itself is a Cliff 3PDT unit, which is what you need if you want proper true bypass switching that includes a status LED.

The benefit of true-bypass is no change in your uneffected sound when the pedal is turned off. The downside can be that without a buffer (non-TB pedals have a buffer), your signal can lose strength and high end content over long cable runs and multi-pedal set-ups.

Starting with a vintage- style Stratocaster, with all pots in the 12 o'clock position and both switches down, you're not a million miles from TS-808 territory: punching mid-range, rolled-off highs, but retaining more bass, overall clarity and, yes, a less compressed- sounding gain structure.

With a Tele and in Brad World, it's reminiscent of his bluesier playing; Playing With Fire from Play for example.

Dropping the gain and raising the volume is good for stinging Texas blues through a Fender-type amp and it really does clean up well off the guitar's volume pot. Flat-out gain brings out a fuzzier quality - it's almost Billy Gibbons-esque, especially with humbuckers, but the note clarity remains.

Flicking the presence switch brings the brighter edge. Brad actually prefers both switches down, but for those of you not using a bright tone or any drive to begin with, this will bring you closer to his 'normal' sound, where picking and plectrum inflections come through strong.

Flicking the mid contour switch to the middle cuts out a swathe of thickness and sits you back into the band mix. There's more 'spank' and overt country-type tone here.

The up position on the mid contour switch is a just a little harder, certainly not as much as the down position; a higher kick that again keeps your twang intact.

With both switches up is the place to be for clear rhythmic double stops, and indeed getting closer to Brad's seminal Me Neither-era lead tone with lower gain settings, assuming you're not already cranking a '68 Tele into a well-sorted '63 AC30, of course.

Clearly your guitar, pickups and picking style all have a major part to play, but the overall range of gain, switch options and tone pot give you every chance of getting the tone and response that works best for you.

Designed from the ground up using the highest quality components, the production Paisley Drive is exactly the same as the one Brad himself uses, according to Wampler.

We've no reason to doubt that - its selection of tones spans Paisley's on-the-edge twang, through to much heavier and harmonically packed gain, always retaining punchy delivery and less compressed overall dynamics.

Given the A-list artist connection and compared with other boutique pedals, the price here is reasonable, too, despite Mr Osborne's crippling 20 per cent VAT.

For blues, country or Americana, this is a very classy, great-sounding and versatile overdrive.

Now check out Guitarist's audio demo of the Wampler Paisley Drive over on their blog.