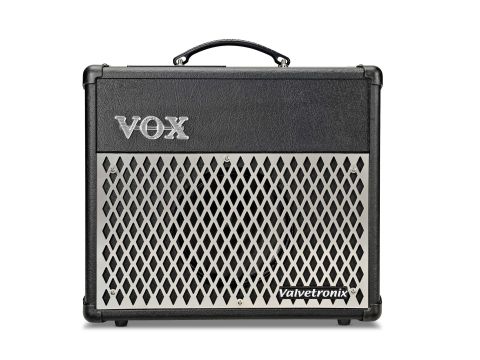 Vox's inspired juxtaposition of valves and digital modelling has created a cool-sounding and very playable small amp, at an affordable price, too.

The Vox AC30 is one of the most famous and sought after amp tones of all time. So it's understandable that a the 30-watt Valvetronic amp would pique our interest.

The VT is the successor to the AD30VT introduced in 2004, which was Vox's first foray into the modelling amp market.

This utilises a 12AX7 valve in the power amp stage, in conjunction with solid-state components, to create a miniature version of a valve push/pull power amp.

This is designed to replicate the behaviour and nuances of a real valve amp - particularly in the interaction of the power stage with the speaker.

The VT30 looks pretty smart, and on the whole appears fairly similar to the AD30VT series that it replaces.

Some cosmetics are different - the front panel Valvetronix logo now sits on the shiny metal grille and the top panel now has contrasting white chicken head knobs - but the main changes are under the hood.

We get 22 selectable amp models, a choice of 11 effects and independent reverb.

The chicken head knobs offer control similar to a conventional amp. Besides the treble, middle and bass controls there's a knob to add reverb independently of the effects selector.

All of these controls dial in the sound, but the overall output of the amp is controlled by a power level knob on the rear panel.

This adjusts the output wattage of the power amp without changing the sound meaning you can obtain that distinctive power amp distortion at really low output levels.

The 22 amps are chosen from an 11-way switch with two amps at each position - the 'green' amp or 'red' amp - chosen by a separate button with associated twin colour LED.

There are three categorised factory-programmed preset sounds - basic, effected and song - available for each of the 22 amp models, making for a grand total of 66.

Pressing the preset mode button scrolls through these colour-coded (green, orange, red) presets that give you the basic amp sound, an effected sound and a sound based on a classic song by a well-known band or guitarist.

All of the presets can of course be tweaked with the chicken head knobs and by adding/changing effects.

In addition to preset and manual modes, there is also channel select mode that accesses eight user presets in two banks of four.

These can be used for storing any sound that you create either from scratch in manual mode or by tweaking a factory preset.

The effects are chosen from a single 11-way switch and each has three adjustable parameters.

A tap switch sets the speed of modulation effects or the time of delays but these can also be adjusted by holding down the tap switch and using the edit knob.

The two other parameters are adjusted respectively by using the edit knob on its own or with the effect bypass switch held down.

Three of the 11 choices are composite effects that combine chorus with delay, compression or a low octave.

The optional VFS5 footswitch has five switches that can either be used to call up your user presets in channel select mode, or for tap tempo and to turn reverb and effects on and off in both preset and manual modes.

Firing either amp up, the factory-programmed presets provide typically practical sounds to dip into and give a nice overview of just what the VT30 can do.

This is especially true of the 22 'song' presets, the majority of which readers of this review will be familiar with.

Doubling the amount of amp models from these amps' predecessors, Vox has plenty of variety on offer: from a rare Dumble Overdrive Special through the obligatory Fenders and Marshalls, to US and German high-gain metal monsters.

Vox's own finest get a look in too with three variations on an AC30, two on the AC15 plus the new AC50CP2.

Overall, the sounds conjure up the flavour of the originals very well from clean to fully overdriven and, thanks to the valve circuitry, the dynamic response feels right.

This makes playing a pleasure and gives you a lot of the spongy feel of being plugged into an all-valve amp.

Without the boxiness you might expect from a small conventional amp, the sound projects nicely out the close-backed combo to fill the room.

That said, anyone wanting a gigging amp that cuts through the drums could be better served by waiting for the larger models to be released.

The digital reverb bigs up the sound and is voiced very much like a traditional spring reverb for an authentic vibe.

The effects cover all the regular time and modulation-based guitar choices plus a very tasty pitch shifter - plenty to conjure up some familiar and interesting sounds without adding extra pedals.

Nice amp, then, for a versatile range of sounds, but perhaps the most practical asset is the rear panel power knob, which is great for getting the levels just right for home practice without upsetting the neighbours.

There's a lot to be said for getting a fully overdriven yet dynamically playable sound at a minimal volume.

If you need total silence, the headphone socket is speaker simulated so you still get an authentic sound through the cans and, with a suitable cable, it can also serve as a great direct feed to your recording system.

With such an array of sounds onboard, the VT30 is a very versatile amp, but it also has a great convenience factor.

Players have plenty of options for dialling in their own favourite tones for instant access from the user presets and can also output them at any volume they choose via speaker or cable.

What you're getting is a nicely melded combination of old and new technology to create an amp perfectly suited for home practice and recording.