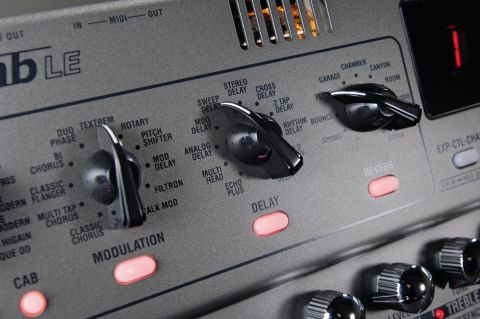 There's something very 'organic' about the Vox's amp sounds, and while it wouldn't be our first choice for high-gain metal, it excels at clean and moderately overdriven valve amp tones.

While most units of this type rely completely on digital modelling, the Tonelab does the initial tone shaping and amp modelling in the digital domain before the signal passes into a valve power-amp circuit.

Now, it wouldn't be particularly practical to have a standard valve power stage in a compact unit designed for direct recording, so this is where the clever stuff happens.

A single low-wattage 12AX7 valve does all the work, but this is combined with a 'virtual' output transformer and a dummy speaker circuit, meaning that the final stages of the signal chain are all in the analogue domain.

Desktop modellers aren't ideal for stage use, though, and the Tonelab SE provided all the Tonelab sounds in a comprehensive pedalboard layout. And now, for players wanting something a little more compact, the LE model makes for a good compromise. Unlike the SE, it only has one expression pedal and there are fewer stompbox effects, but there's still plenty to suit most musical styles here.

Basic operation is simple, as we've come to expect from all multi-effects units nowadays. The 120 patches are arranged in banks of four, and there are four main footswitches for selecting the patches within a bank, along with up/ down footswitches for scrolling through the banks.

In common with several other units of this type, the Tonelab LE has an effect on/off mode, entered by holding down the bank up footswitch. In this mode, each of the four main footswitches corresponds to an effect type (pedal, modulation, delay, reverb) allowing you to use the LE more like a row of stompboxes.

Whichever mode you're using, it's a quick and easy task to change and adjust the settings for a patch. The five chicken-head rotary switches at the top of the control panel correspond to the amp model and four effects modules. Simply turn these to select the desired amp model or effect and you're done.

Any of these modules can be added to or removed from the signal chain by means of a small pushbutton by each rotary switch.

Further adjustment is available from the row of 'value knobs' next to the footswitches. These knobs are used for adjusting parameters in all five modules, so you first have to make a module 'live' by clicking its pushbutton.

This layout isn't a million miles away from the matrix editing display found on several multi-effects units, but Vox's insistence on using real knobs and switches feels a little more 'real' and will be a crucial feature for players who normally shy away from all-in-one effects units.

As on the previous two Tonelab units, the effects are fed into the signal chain in a way that imitates real-life applications. The pedal effects are placed before the amp models, while the delay, modulation and reverb modules come after the cabinet model.

The connection order of the three stereo effects modules can be changed, too - all six permutations are possible, and the order can be set independently for each patch. An external signal chain can also be connected to the LE via the insert send/return jacks, and can also be independently incorporated into any patch by pushing the button by the pedal effect selector.

Further tweaking is just a click away. Next to the amp model selector is the small cab button. Pushing this allows you to change the cabinet model by means of the first value knob (this would normally adjust the amp gain). By pushing the amp and cab buttons simultaneously, you can then adjust the sensitivity of the noise reduction circuit.

The Tonelab LE's outputs can be connected in stereo or mono, and the amp/line pushbutton offers a choice of tonal compensation presets, designed to suit a range of amps or monitoring systems. For maximum flexibility, the 'Ln2' setting adds a global three-band EQ to the output stage.

We're already familiar with the basic Tonelab sound palette, and the LE has the same great range of amp models. As usual, the factory presets are a bit overblown, with too much reverb masking the quality of the basic amp tones.

If you decide to demo one, do spend some time listening to the amp/cabinet models in isolation, as this is where you'll find the real charm of the Tonelab LE. The highlights are still the squishy overdrive and tightly focused mid-range of the Vox AC15 model, the UK Blues model (turn everything up full for best results!) and the Black 2 x 12 model, but there's plenty more on offer.

That's not to dismiss the effects, though. The Vox-Wah, U-Vibe and Treble Booster are perfect for retro fans and there's a great selection of overdrive and distortion effects. In our opinion the extreme metal distortions are less convincing than the low to medium-gain overdrives. It's usually the other way around with all-in boxes, and that fact alone will win the LE many friends.

Like its larger brother, the Tonelab LE has a lot more stereo (post-cabinet) effects than the original Tonelab. We're particularly impressed by the reverbs, especially the spring, plate and garage settings, although it's a shame there's no option for using the spring reverb as a pedal effect for twangy rockabilly or early Van Halen moments.

Our only concern about the LE's sound is the rather low output. Even with the output level control and the individual patch levels at the max, the unit still seems considerably quieter than other similar products.

The logical layout is particularly appealing; if you've previously been reluctant to use multi-FX units because of the rows of blinking LEDs and complex editing procedures, the Tonelab LE is just the thing for you.

With a broad range of amps, effects, a built-in tuner and that 'real' feeling expression pedal, the Tonelab LE meets the needs of gigging and recording guitarists in return for minimum brain work. It's also great value for money.