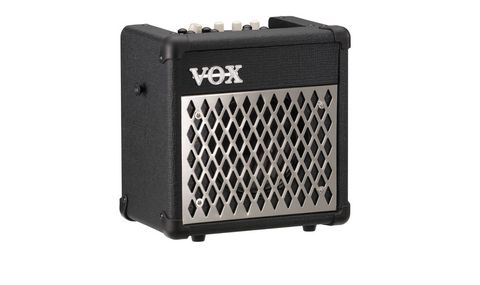 For such a little amp, the Mini5 offers huge possibilities.

Buskers are an odd bunch. Among these high street-residing strummers are the brave, the foolhardy, the penniless and the bored. But there's one thing they have in common: the desire to be heard. Enter the busker's amp, which offers volume, battery power and a smattering of effects to street performers eager to please - and make money, of course. Vox's Mini5 Rhythm is one such amp, but the sheer number of features means it could occupy your bedroom carpet just as well as your town centre's concrete.

The Mini5 packs a lot into its sharp-looking silver enclosure. There are 11 amp models and eight effects taken from Vox's acclaimed Valvetronix range, plus auxiliary and mic inputs for backing tracks and vocals.

These features were all available in the previous Mini3 model, but the Mini5 offers two key additions over its little brother: a larger, more capable 6.5-inch speaker, and rhythm patterns - 99 of them, to be precise.

Starting with the tones, the models on offer are a mixed bag: clean emulations are solid unless you up the gain, while the distortions sound a little too scooped to be truly useful in a live scenario.

However, the acoustic players among you are more likely to spend most of your time on the handy Line In setting, which delivers a signal clean of processing. Add in the convincing effects - two delays, two reverbs, compressor, chorus, flanger and tremolo - and you've a polished live sound for the punters.

Still, all those features would count for nothing if the Mini5 didn't deliver the goods across a crowded street. Fortunately, however, this little combo's five watts deliver just enough volume to reach a group of eager onlookers, while Vox's Bassilator technology pumps out an impressive low-end through such a teeny tiny speaker. Of course, the amp's not going to cut the mustard for full-on gigs, but for busking, home rehearsal and band practice it'll do the job.

Speaking of which, the Mini5 also proves to be a useful practice tool, thanks to those rhythm patterns we mentioned earlier. We've been banging on about working with drum beats to inspire new songs and ways of playing, and the Mini5 provides a quick and easy way to do so.

Some of the percussion samples are a little clunky, but the actual rhythms are all top-notch, and you might find yourself venturing into some unexpected styles - we couldn't help rocking some NIN-esque grooves over the dance beats.

It's impossible to discuss all the Mini5's features here - there's also a rudimentary tuner that detects only E notes, a power setting switch that cuts volume but boosts battery life up to 19.5 hours, plus the option of delay/reverb effects on the microphone channel.

It all adds up to a portable powerhouse that's great for street performances and bedroom songwriting, even if some of the electric tones are a little lacklustre.