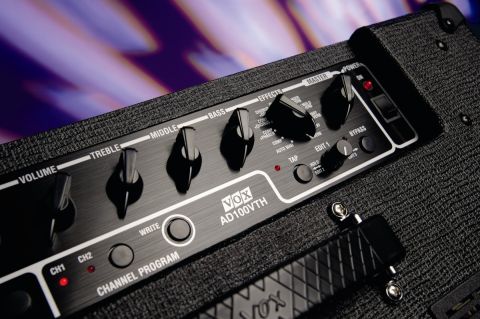 A versatile, powerful half stack that will sound dynamic and authentic whether competing with a drummer in a dingy practice room or sitting in the your bedroom with headphones at 4am.

When Vox introduced its AD30VT and AD15VT combos back in the summer of 2004, it set a new standard in amp modelling, with a hitherto unimaginable tone-per-pound ratio. When we got our hands on them, it didn't take us long to conclude that no one else could compete with Vox for sounds that good at such a low price.

Modelling preamps, and now software modelling technology, have taken giant steps in the last couple of years, with the likes of the Line 6 Toneport and Native Instruments Guitar Rig software, but to our ears, the Vox Valvetronix products are still the most authentically valve-like standalone modelling amplifiers in their price bracket and even beyond.

We shan't go into the concept behind the Valve Reactor technology at the heart of the Valvetronix circuits in depth, but for the uninitiated, it's this: a digital preamp designed in conjunction with Korg is linked to a single ECC83 preamp valve that acts as a small intermediate power amplifier, driving the output transformer in a similar dynamic fashion to an all-valve amp.

Theory aside, ultimately your ears are the best judge, and if you enjoy the sonic performance of the smaller Valvetronix combos but require the greater power and flexibility of a head and cab configuration then the AD100VTH could be the solution.

The head's cosmetics tie in nicely with the rest of the range, using the same diamond-patterned steel grill that evokes the classic Vox diamond-weave speaker cloth, albeit with a more futuristic aesthetic.

The control panel is identical to its lower-powered brethren, while around the back we again encounter the invaluable power level control, which attenuates the output wattage of the power amp. This allows the Valve Reactor power amp to be driven at lower, even bedroom-friendly, volume levels.

There's also the addition of a global presence control on the back panel, which is extremely useful for tuning the head to the tonal variances of different speaker cabinets.

Construction wise, an amplifier at this end of the market isn't likely to be subject to boutique-style overbuild, but both the Chinese-manufactured amplifier head and cabinet seem solid enough to cope with the rigours of live performance. That said, we did have reservations about the V412BK's black speaker cloth that felt rather like a pair of tights, quite frankly, and may prove prone to tearing (or laddering).

The AD100VTH's rotary amp model selector pot didn't quite share the positive action of its chicken-headed siblings and failed to align precisely with the control panel legends. Luckily, our ears could tell the difference between the 11 models on offer.

As with the other Valvetronix models, each amplifier model has a corresponding preset with effects designed to complement the sound, but the real fun is to be had by delving into manual mode and shaping both amp tone and effects to taste.

Two user sounds can then be stored and recalled via the amplifier's control panel or the VFS2 footswitch (£21.95), which sadly isn't supplied, but can be configured to give access to your stored sounds, and toggle either effects bypass or manual mode on the fly.

One of the immediate sonic highlights as we flip through the 11 amp models on offer is the UK 1980s amp model, which sings and grinds like an old JCM800 in a much more authentic manner through the V412BK 4 x 12 cabinet than it did in previous combo incarnations, even retaining a musical sparkle when cleaned up with the guitar's volume control.

The highest gain models supplied by the Nu Metal, UK Modern and US High Gain sounds are all suitably venomous, providing several different flavours of biting distortion for all manner of aggressive alternative rock and metal textures. The deep, closed-back cabinet adds a degree of supplementary bottom-end thump to the equation, and the noise gate tidies things up well.

Both of the Dumble Overdrive Special-derived Boutique Overdrive and Boutique Clean selections are sophisticated, musical voices that respond well to picking hand dynamics and provide an arguably less generic alternative to the Fender, Vox and Marshall voices which are stalwarts of virtually all amp modellers, although that's not to say that these don't sound very good indeed, with more than enough of the essential character evident.

The Vox AC30 and AC15 models are different enough to warrant the inclusion of both, and due to the larger cabinet, both sound more muscular this time around, although plenty of that signature chime is there if desired. Compared to the quality of the amplifier models, the AD100VTH's built-in effects seem rather perfunctory, with rather bland chorus and flanger voicings.

However, both the delay and reverb can be used to create some pretty dramatic ambient soundscapes when desired, and the combined tremolo and reverb works rather well too - try playing harmonics for an almost Fender Rhodes-like sound.

Across the board, the degree of attenuation provided by the rear panel's power level control means that the stack is equally at home in a more restrained environment and really does sound as vital and dynamic for home practice as it does at stage levels.

The flat-fronted V412BK cabinet itself suffers a little from very directional performance and thus is not the best aid for monitoring your onstage sound, and we found that it was easy to lose much of the treble projection when moving simply a yard or two to the side.

At the right angle, though, we've no reservations about the 30-watt Vox drivers inside. We'd recommend that perennial live favourite the empty beer crate to try to bring the cabinet closer to ear-level.

Alternatively, the AD100VTH is equipped with a pair of speaker outputs that can be switched between series and parallel modes to provide scope for a range of speaker impedances, should you have a different cabinet in mind.

We took a line from the combined speaker emulated headphone/line output into a Mac running GarageBand software to see how well the sounds recorded directly, and we felt that they recorded rather well indeed, although some care is advised with the equalisation of higher-gain amp models in order to avoid top-end fizz.