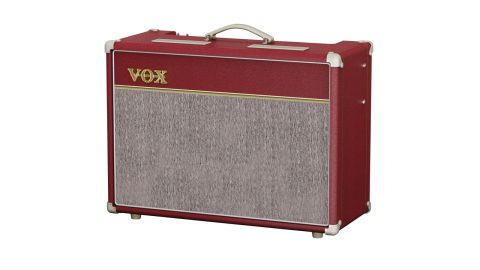 If you're looking for an amp that typifies the early Brit Invasion sound, then the AC15 is the one - but we're not sure the V-Type is the right speaker for this amp.

Having been designed by audio genius Dick Denney and launched way back in 1958, Vox's AC15 was the early sound of The Shadows and The Beatles, before the higher-powered AC30 version arrived and fuelled most of the classic 'British Invasion' sounds of the early 1960s.

Here, we're taking a look at a special limited-edition version of the modern AC15, which comes in a super-cool retro Garnet Red vinyl, with Tygon grille cloth and a Celestion V-Type 12-inch speaker.

Circuit-wise, the Red Limited Edition is an evolution of the original, with two channels, dubbed Normal and Top Boost, accessed via separate input jacks. The Top Boost channel features volume, treble and bass, while the Normal channel has a single volume knob.

Both channels feed into the AC15's reverb and tremolo effects, before arriving at a global volume control and Vox's trademark Tone Cut control, which works backwards, rolling off treble as you turn it up.

On the back panel, there are extension speaker sockets and a socket for the optional two-button footswitch, which toggles the reverb and tremolo effects.

The build quality is excellent - since all its amp production was moved to China, Vox has had plenty of time to get its processes right, and it shows in details such as the custom cream corners and carry handle.

We love the retro colour scheme, reminiscent of the vintage Dansette record players that were so popular in the 50s and 60s, although it won't be everyone's cup of tea. The new Celestion V-Type loudspeaker definitely adds to that vintage vibe, with a creamy midrange bias that sounds great for lead stuff.

However, the higher harmonics you might expect to hear from a Vox are less obvious, even using bright single coils, with the treble maxed out and no cut on the power amp. They're there, sure, but just not as defined as we'd like.

The reverb and tremolo effects both sound really impressive; it's just disappointing that the two-way switch needed to remotely control them isn't part of the package. With plenty of volume for small to medium gigs, the AC15 holds its own with a full drum kit, although with the master right up, things can get a little too muddy, especially if your axe of choice is powered by humbuckers.

Compared with some of the closest competition, the Vox could be viewed as a little quirky, lacking many of the modern features some of us take for granted. However, if you're looking for an amp that typifies the early Brit Invasion sound, then the AC15 is the one - but we're not sure the V-Type is the right speaker for this amp, unless you want a great creamy lead tone and nothing else.

If you really want to hear Vox's trademark complex high-end sparkle, you might want to think about saving up for the Alnico Blue-powered version, which costs slightly more, but in our opinion is definitely worth it.