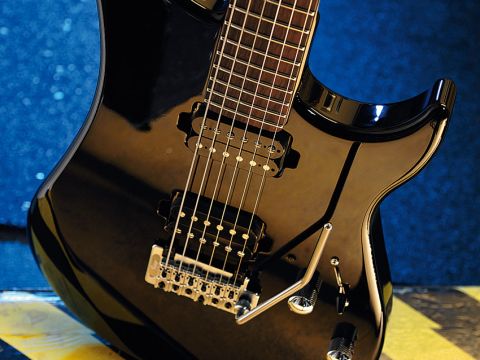 A nice twist on a great Vigier design aimed squarely at technique-led rockers. Shame it's only in black…

Vigier is continental Europe's leading answer to high-end American custom brands such as Tyler, Tom Anderson and Suhr. Each variation on the theme of the company's Excalibur might feature a flash of flamed maple, a fancy finish and much more besides.

This new model, the concept of which initially came from Vigier UK's Ben Whatsley, boasts several new features and is, among other things, the company's first reverse headstock electric.

"This is a stripped-back Excalibur," says Whatsley. "We're offering it just in black to keep the price below that of the fancier Excaliburs, but the Kaos is about performance - shredders will love it!"

It's not often that we begin a review with a focus on a guitar's headstock but the reverse option here also features two unusual string retainers. Vigier refers to them as Flex-retainers, they resemble a guitar string's ball-end and they're secured by skinny wires fed through the maple. They work well.

The tuners are over-sized Vigier locking types that are stiff and a little cumbersome in use. The 10/90 carbon/maple neck is super smooth with a tactile, addictive 'D' profile.

As is the norm for Vigier, the 'board includes a zero fret, taking the total to 25. The fingerboard itself is rosewood and is naked save for side dots and the Kaos dots inlaid at the 12th fret.

Pickups are from German maker Amber, an Alnico V-loaded Custom Hot in the bridge and a Classic Rock, based around an Alnico II magnet, in the neck. As well as a five-way lever selector switch and volume and tone controls, there's a killswitch - taken from Ron Thal's Bfoot Signature - sited just below the bridge pickup, which is included as a result of customer requests.

There's a transparency and sparkle to all five selections that, at lower gain amp settings, can tend towards sterility so take care with treble and presence settings. That character comes into its own with higher gain, however.

Positions two and four are respectively a solo bridge and neck single coil, with the third position mixing both singles in parallel. A measured level of overdrive gives that beautifully strident Audley Freed-style tone. It's tonally fat, but demonstrates a likeable glassy edge that's tricky to replicate; add a little more gain and presence and you're into smoother blues territory.

Increasing the amp overdrive yet further enables the bridge humbucker's throat to add a dollop of warmth to classic rock-style riffs. The Alnico V gives the upper-mids plenty of grunt, while the neck position Classic Rock rounds off the edges, bite and indeed lives up its name very well indeed.

When used with harder rock and metal gain settings, Vigier's tonal stamp comes through. The treble gives plenty of cut and drive to allow super-fast lead lines to come to the fore, but it's not at the expense of musicality and articulacy as some rock guitars suffer.

The killswitch is great fun to play with and its location means that you can pull off some unusual effects. Rubbing your thumbnail over the switch as fast as you can gives a reasonable impression of a machine gun. It's hard to see, but once you know it's there, it's also hard to resist.

The Kaos stays in tune well, even after upping the string gauge to 0.010s, with playability up to Vigier's slick standards. The two-point bridge, too, gives way more whammy than any non-locker has a right to.

Reverse pegheads are always a bit of a faff if you're new to them, so on-the-fly tuning tweaks will take some practise!

Vigier's Excaliburs aren't the most common guitars out there, but the brand deserves to be mentioned in the same breath as 'sexier' US marques. The Kaos offers the same excellent quality playing experience, and what you lose in posh looks you gain in a comparative reduction in price with the standard Excalibur ranges.

The atypical palette of tones has both positive and negative aspects. If you're on the lookout for guitar sounds that mix traditional power with an uncommon transparency, then this is for you. The £1,703 price is a hefty investment, albeit good value alongside similarly spec'd USA made instruments.

The zero fret and stripped-back look are Marmite features - love them or hate them - but all power to Vigier for being unique. Seriously, try one - it's right up there with the very best.