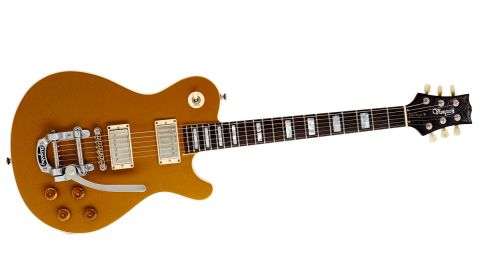 This is a hugely enjoyable guitar that doesn't have endless options but more than enough so that we'd wager you'd be able to find your fit.

It seems like only yesterday that Adrian 'Ade' Hardman started making his Vanquish guitars.

It was, in fact, back in 2007 that these instruments started coming to life and, having weathered a worldwide recession, he's now preparing for his 10th anniversary. Ade was never a one-off custom-style maker. Instead, his original double-cut Legend brought with it some unique features such as its curved neck-to-body joint, scarfed headstock and recessed hardware.

It was followed by the single-cut Mystique, then the more conventional Classic, based on the same outline. Which brings us to this new Heritage Custom, "a guitar with true vintage appeal [and] a modern day twist to celebrate our 10th anniversary", says Ade today.

The 'Custom' part allows the model to start at £2,450 and be upgraded from an extensive list of no-cost and upcharge options. So, while the base model has a standard VOS-style nitro finish, we've upgraded our review model to the most aged finish with "crazing and light relic'ing" (£100), we've added locking Kluson Revolution tuners (£25), chosen a USA Bigsby B5 Vibrato with Vibramate fixing plate (£170), opted for Monty's custom-wound PAFs  (£75), and picked a Vanquish treble bleed/tone control circuit board (£75), which all contributes to the price printed here.

It might be based on the Classic, but it looks like a long-lost guitar from the 50s that might have been designed by Leo Fender and Ted McCarty and taken on the road with Willie Nelson for the past half century. Even before we get to the extremely detailed build, it's the look and vibe that capture our attention.

It really does look and feel like an old, played - but not abused - electric. Not everyone gets this falsehood, of course, and the lighter VOS-style finish might just suit you better. Either way, you choose.

And choice is at the heart of this guitar. Aside from our upcharge options, you can opt for one of three neck profiles, eight vintage-y colours, full-size or mini humbuckers, and P-90s.

Under its worn exterior lurks a classic slice of guitar craft. The sort-of Tele-inspired slab body is 'aero grade' Brazilian mahogany chambered to add a soupçon of resonance and keep the weight to 3.6kg (8lb) or below.

As ever, the Brazilian mahogany neck has a headstock splice and that unique neck-to-body joint that's been a part of the Vanquish since day one. The Gibson-cambered Indian rosewood 'board has classic block inlays, beautifully rolled 'worn-in' edges and extremely well-fitted and fettled jumbo frets.

Tuners are rear locking, which certainly helps restringing with the Bigsby, while the Monty's 'PAF-style' humbuckers look gorgeous in their aged nickel covers and are controlled with a conventional Gibson-like setup: the controls are Emerson 500k volume pots with US spec 500k push/push tone pots wired for individual coil splits (voicing the screw coils).

In addition, these humbuckers have minimal wax-potting to the baseplate and covers only, which, says Ade, "[leaves] the coils un-waxed for true vintage PAF tone but without the microphonic feedback often found with non-wax potted pickups".

Another unique feature is some additional wiring (designed and made by Cliff Brown at 633 Engineering) that allows you to adjust the treble bleed circuit and the cut-off point of the tone capacitors. Each Vanquish is also fitted with a MusiTrac ID micro chip that's installed in the headstock under the logo.

There's little doubt that this feels like a vintage piece with a beautifully fat neck (23mm in depth at the 1st fret, 25.5mm at the 12th). There's not the bright vibrant ring you'll hear on a new PRS McCarty, for example; here, it's slightly softer and more hollow-sounding but nonetheless sustaining with a plays-like-butter setup - again, the perception is an old guitar that's been refretted.

Plugged in, there's plenty of old-school Gibson in the voicing with a 'low wind' tonality - 7.74kohm (bridge); 7.09kohm (neck) - that, in combination with the coil-splits, could sit in a retro jazz/ blues or soul setting with ease.

The Bigsby brings its beautiful shimmer but also something of a 'semi' to the sound. Above all, and it might sound strange, it not only looks worn in and used, but it sounds it, too. Or are our eyes playing tricks with our ears?

It's certainly an absorbing guitar that doesn't shy away from classic rock or roosty blues, especially with your pedalboard providing the grit and grain. Yet even straight into your amp it sounds a little 'dirty', adding some texture to a potentially bland clean tone or some thickness and body to a lead break.

If you're chasing more of a Les Paul vibe, the optional maple cap might well add some extra high-end clarity; likewise, choosing a standard Faber stud tailpiece will have the same effect. But if you live in that sort of 'old Gibson chiming clean-to-gritty area' that almost blurs the line between a semi and a solid - and, of course, love your Bigsbys - then you'll be totally at home here.

The tone circuit is accessed by removing the small bolts that hold the rear cover. Two smaller trim pots affect how much of the treble bleed cap is in circuit when you roll back each volume. The larger two trim pots determine how 'woolly' you want your tone control to be when it's rolled off. A sea of subtleties or a tweaker's heaven? Again, you choose.