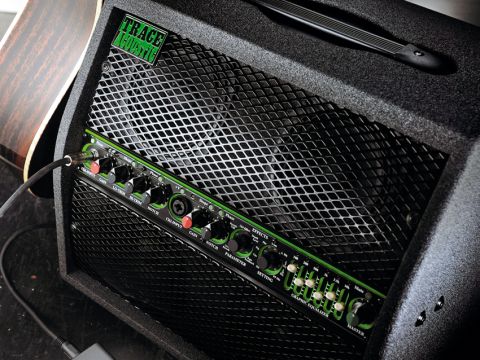 The TA200 offers a room-filling spacious sound and an impressive feature list. If you're serious about your sound, it really should be considered.

In 1989, Trace Elliot created the acoustic amp genre with its Trace Acoustic amps. Suddenly, acoustic guitarists had their own PA-in-a-box and, like Trace Elliot's bass backline, the new amps were highly spec'd.

Trace Elliot eventually floundered - the brand sold to Kaman, then Gibson, before finding its current home with USA giant Peavey. It's certainly taken a while for the new amps to appear - they were originally announced back in 2008 - but then they have been completely redesigned and had to be: the market is now flooded with acoustic amps.

These are not cheap units. Even the diminutive TA100 tops the £1,000 mark and our review sample costs as much as many small PA systems. Which is exactly what it is, really. It's also feature-laden and boasts a hugely informative 30-page user manual!

But it's still nicely sized, bigger than an AER, with a gently sloping front, metal grilles protecting the four five-inch speakers, a top carry handle, and a light, easy-to-lift weight. Included in the price is a carry bag, as well as the six- button footswitch with eight-pin DIN connecting cable.

In simple terms, it's a dual- instrument and instrument/ mic channel stereo amp with 100W per side of fan-cooled power. The control strip is sited midway on the front - an unusual placement, as even on a necessary chair or stand, the controls aren't exactly handy during performance.

Channel one has gain, lo-trim, hi-trim and notch with piezo switch (for passive or low-level active systems), pre-set shape (treble and bass boost with a mid cut) and phase switch. Channel two has no EQ, just gain and notch, a +V (phantom power for either mics or instrument preamps), shape and phase switches.

One of the many clever features is the input configuration: if you have, for example, a dual- pickup system (piezo and mic), using just a single stereo lead will send the dual outputs to the TA200's individual channels.

Modulation depth and rate, delay time (via the tap tempo function to a max of 1100msec), plus level and feedback parameters are all tweakable, and these settings are stored automatically.

Round the back, it's equally well spec'd: along with the power switch plus mains and foot controller inputs we get stereo send/return FX loop, stereo balanced DI outs with pre/post switch, tuner output, earth lift and a handy front panel light on/off switch if you - or your bandmates - find the illuminations too Blackpool.

Indeed, power up the TA200 and it's quite a display! You can switch off the green backlight if you need, which still leaves you with perhaps as many as 16 bright LEDs, depending on the functions you select.

The rather conservative white-on-black control legends are clear enough, although on a dark stage you might struggle to see the smaller effects parameter and setting legends.

Operation is simple so long as you understand the gain control, which introduces a studio quality 'soft-knee' compressor to each channel.

The lower the gain setting, the less compression you'll hear. Each gain control has a signal level LED - when it moves from green to orange you'll hear a little compression creeping in, if you overload it to red, it's much more noticeable and a potential problem if you're using an outboard level boost, as your dynamic range can become severely limited.

Both gains and the master control have multi-detented notches, which give a positive feel to the controls; EQs have centre-detented 'flat' positions, in fact only the graphic EQ sliders feel a little less than reassuring and somewhat cheap.

There is, however, nothing cheap about the sound it produces. We received nothing but compliments in various gigging situations, both with a band and solo, backing a singer. It's a highly detailed sound but less 'sharp' than we remember the first generation Trace Acoustic amps sounding.

The compression is easily controllable, the EQ broad and natural. In fact, totally flat was our preferred setting, with a little tweak of the lo-trim and maybe the graphic depending on the venue and, of course, your input source and personal taste.

Certainly with a steel-string, the shape engaged and some stereo chorus things hardly sound naturally 'acoustic' - and a lower-end electro with a basic pickup/ preamp will need more work - but with a combination of Yamaha and Taylor electros, a couple of Rare Earth-equipped steel-strings, our reference Martin electro dreadnought and even the 'acoustic' sounds of the modern Variax and PRS piezo-loaded hollowbody, the results are excellent.

As any gigging acoustic musician will know, amplifying your acoustic can be a nightmare. Some players are more than happy to simply plug into a PA, others still prefer the good ol' microphone.

But here is a quality-sounding amp with more than enough performance features, effects if you need 'em, excellent feedback rejection, and enough power and spread to fill a small venue before you need to hook it up to a PA.

It's lightweight, compact and although the control placement does take a little getting used to, it's an amp we'd want to use time and time again.