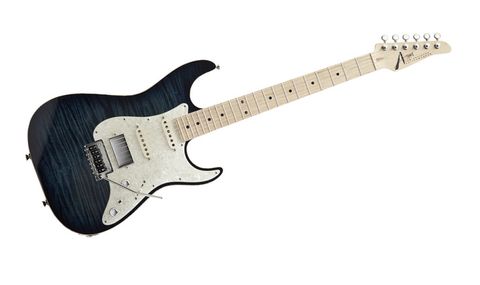 A truly beautiful modern take on a classic, with a light weight and exceptional build, playability and sounds.

While trends come and go, Tom Anderson and his small but ridiculously talented team continue to produce one thing: astounding state-of-the-art electric guitars. Their quite modern aesthetic might not be your idea of 'cool', but very few guitar players would deny the quality of build, playability and sound. Does electric guitar making get any better?

Well, to put that to the test we look at one of Anderson's 'big hits', the Hollow Drop Top Classic, first introduced in 1995. Prepare to be blown away...

The Classic is Anderson's long-running Stratocaster-based guitar: a boutique take on Fender's finest that, thanks to a huge number of custom options, can be anything from a slinky vintage-style S-type or a face-melting metal monster with looks to match.

The alder back here is hollowed out, leaving a centre block and sides, which is capped with a thin (around 5mm thick) centre-jointed flame maple cap that curves over the rounded forearm cutaway giving it the 'Drop Top' name.

Fit and finish is stupidly good: the thin mirror gloss of the polyester finish, the cleanly masked and scraped natural maple edge... Perfect. The outline may be familiar but so many features aren't, such as the neck-to-body join. The body end of the maple neck is cut into a V-sided shape that sits in a similarly V'd slot in the heel area of the body.

The precision of the modern CNC router used to cut these parts means that the fit is perfect and two bolts not only pull and hold the parts together top to bottom, they also slightly pull the neck downwards into the body. It's unmovable and a bolt-on joint that really maximises the vibration of the strings: both guitars have a glorious acoustic resonance.

Previously known as the 'standard' neck profile, the now-called 'even taper' neck is beautifully shaped, a good full C-section that doesn't taper a great deal from its 1st fret depth of 21mm to its 22.6mm depth at the 12th. The 'board has a pretty subtle compound radius that starts, Gibson-like, at 305mm (12 inches) at the nut and flattens out slightly to 356mm (14 inches) by the top, 22nd fret.

Sure, if you can't play anything else but a vintage Fender-like 184mm (7.25-inch) radius you're going to find this too flat, but most of us won't be thinking about the radius because our fingers will be skipping over the finely fettled medium gauge stainless steel frets at such a speed that the only thing you'll be considering is how can you afford to buy one.

Set up is low and slinky (around 1.3mm on the treble at the 12th fret, through 1.6mm on the bass-side, with the barest hint of relief ), but where so many guitars would struggle - and we'd struggle to play them - every note rings out perfectly with enough height to the fret to dig in without it feeling over-tall or too big.

It's astonishing, not least the fret work, which is much tougher to do on these harder stainless steel frets. Even under a magnifying loupe it's hard to see any abrasion marks - each fret end is perfectly domed, almost like a signature, and the fingerboard edges are just slightly rolled to give a played-in feel.

This same attention to detail pervades the rest of the instrument. On the super smooth vintage-style vibrato, the E and A string tuners have higher posts than the other four and an over-tall string tree on the top two strings means that all six exit the nicely cut nut at pretty much the same angle. Tuning issues? Don't be silly.

Anderson guitars always use Anderson pickups and here we have two SC1s at the neck and middle, with flush pole pieces. They look like single coils, but are actually stacked humbuckers. The bridge HC-3 is a conventional humbucker with a "hot output, with vintage character still nicely intact that just pushes the front of the amp a touch more than the HC2, in case a bit more musical muscle is needed," says Anderson.

Typically, the controls are not standard. The five-way lever selects the pickups in normal fashion with the added option, via a pull/push switch on the tone control, of introducing the bridge pickup to either the neck pickup or to the neck and middle mix.

Between the master volume and tone is a smaller three-position toggle that has a dual function. In up position it splits the bridge humbucker to single-coil operation, middle position it's standard humbucking, and in down position it introduces a passive VA mid-boost. Although technically possible, this three-way switch doesn't split the middle or neck pickups, but in that down position it does apply the mid-boost to both of these pickups.

Anderson has been one of the most vocal supporters of Buzz Feiten and his 'sweetened' tuning system, which is featured on all Anderson guitars, including this one. It's yet another detail that adds to the superb intonation and musicality of this guitar.

Aside from being studio quiet, the Classic's range of sounds should more than satisfy most working players with stylistically broad repertoires. The 'single coils' have a produced 'cleaned-up' sound, plenty of Fender-like spank and sparkle that sounds just a little rounded in the high end and fuller in the mids.

Certainly, when swapping from a similar Strat-alike with vintage-spec single coils you'll easily perceive a difference. But if you want a vintage Strat sound, go buy one. Anderson guitars are designed for the players who operate in worlds where those 60-year-old sounds don't always work. The in-between tones are super sweet and this guitar loves effects, too.

Having sound-tested the guitar before we investigated the pickup specs, Anderson's description of the humbucker is spot on: yes, it does have quite a pokey output that straight into your amp delivers a nice kick, but it's surprisingly open, too. There's midrange thickness, but it doesn't dominate.

Split, voicing the neck-facing coil, it is really usable, too - not just in conjunction with the other pickups but on its own. The passive mid-boost is just that. Like engaging a wah pedal and knocking it back a little, there's a bark, for sure, and for gained sounds or solo boosts it's like a very thick humbucker. Especially if you use your volume and tone controls, you won't be short of sounds here.

For some people, 'perfect' craft can be characterless, unappealing, whereas funky old guitars seem full of mojo. Many of us like our vintage vibe, but on a paid gig in front of a big audience, it can be a different story. That's where one of these super guitars comes into its own: a perfect working tool, perfectly made with sounds and playability to match. The 'best' electric guitars being made today? We think so.