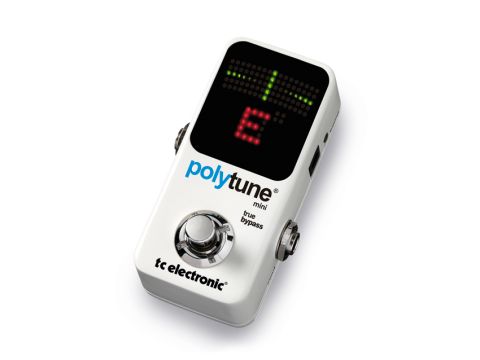 The cutest, best-value tuner for the price.

You've heard us bang on about it for nearly two years now. Polyphonic tuning - the biggest advancement in guitar tuning since Pete Doherty learnt the 'fifth fret method' - was spearheaded in 2009 by TC Electronic with its PolyTune stompbox.

Oh, how we marvelled at its sleek design, ease of use and jaw dropping ability to listen to all of your strings at once. Then came the iPhone app and we began to wonder how TC could evolve further.

"If tuning up one string at a time is more your thing you can still do it. The PolyTune Mini jumps seamlessly between the two modes."

The answer recently arrived on our desk. Still with the wouldn't-look-out-of-place-in-the-Apple-Store design, the PolyTune Mini features the same polyphonic tuning as its bigger brother, plus the recently introduced Capo and Drop-D modes.

The main difference is that it's about 20 per cent smaller, measuring 51mm wide by 93mm front-to-back. Of course, there are a few other limitations: you can't update the Mini over USB and it will only run from a power supply (no battery).

The Mini has different modes, depending how you tune, all of which can be selected by pressing the small button on the side of the pedal. You can go for standard, dropped tunings (with standard intervals up to five semitones) or tell the pedal you're using a capo (up to the seventh fret).

It works exactly as before: plug in, strum your strings and the pedal's six LED 'columns' (one for each string) detect your tuning. Green is in tune, above is sharp, below is flat.

TC has also introduced the Drop-D tuning mode for the Mini. This calibrates the pedal for the 'tone-down' interval on your low string. It's accessed by holding down the stomp switch for a couple of seconds and can work in combination with the other dropped modes for achieving, say, drop B tuning.

All of this talk of polyphony might feel as though you're reading a keyboard mag, and if tuning up one string at a time is more your thing you can still do it. The PolyTune Mini jumps seamlessly between the two modes.

When it senses only one note has been played, the display reacts like a traditional chromatic tuner with a virtual needle. Simply strumming two or more strings together kicks it back into polyphonic mode again.

TC Electronic has clearly worked hard to push things forward of late. While the mini didn't leave our jaws dropped like the original, it's still the cutest, best value tuner we can think of for the price.

Yes it has some shortcomings when compared to its big brother: the PSU only (not included) operation and the lack of a daisy-chain power output and USB socket. The fact that it can't be updated shouldn't be a problem - we're buying it for what it is, not what it could be - plus the range of tuning options available is more than enough.

If you want all of those extras, they're available for a bit more cash. Otherwise, you'll save pedal board space, and money, with the PolyTune Mini.