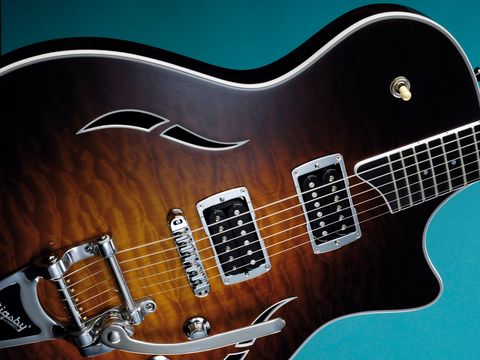 A very good sounding guitar that suggests at many a sound from yesteryear.

Until the start of this year all Taylor's electrics were hard-tails. The T3/B is technically the first one with a vibrato (a new-design fulcrum vibrato will be offered on the Taylor SolidBodies later in the year) and it's hugely ironic that such a forward-looking company known for its precise, impeccably made instruments should choose a vibrato designed in the fifties.

"I don't know whether you remember from your last visit, but we'd made a prototype T5 with a Bigsby on it," says Taylor's David Hosler. "Doyle Dykes had come in - I wasn't here, I was in England - and he was talking to Bob [Taylor] and asked if he could borrow it for a recording where he needed a Bigsby-equipped guitar.

Doyle took it and he also played it at a show, I think at the Ryman in Nashville, and next thing we were flooded with e-mails about putting a Bigsby on a T5! I was still objecting 'cause I'm like, man, it looks cool but it doesn't work that well."

What changed Hosler's mind? "I came across this roller bridge and then I was in Germany having dinner with Fred Gretsch [the owner of Bigsby] and he says, You should put a Bigsby on one of your guitars, and I'm thinking, okay, perhaps now we can.

"So we got a couple of Bigsbys on guitars and then did some stuff with the pickups, found the right locations and we all felt that it just worked! It's one of the few times I can say we really didn't have to work that hard to do it, but I was waiting for the thing that would make the Bigsby really functional and the roller bridge just did it for me."

Construction-wise it follows a similar path to the T5 but is more 'electric' still. The two-piece centre-joined sapele back is hollowed out, leaving not so much a centre block as two quite thick ribs running top to bottom that not only hold back and front in a rigid fashion but also support the pickup ring mounting screws and the bridge/tailpiece studs.

The top - quilt maple-faced laminate of poplar and compressed fibre, approx 3.8mm thick - is therefore unbraced and very smartly edge-bound with a white plastic and inner black/ white purfling. The finish on both our vibrato and non-vibrato samples is absolutely superb and the attention to detail faultless.

Yet the T3 is a surprisingly complex construction. Both body and back are curved across vertical and horizontal planes. This means that, although the rim thickness is approximately 52mm at the base and thins some 10mm at the tip of the neck heel, the curved construction yields a central depth - Les Paul-like - of just a shade under 60mm.

The 21-fret neck joins the body at the 14th fret and is again in keeping with Taylor's acoustics, if a little restricting for an electric. It's actually a bolt-on neck (with two steel reinforcement rods either side of the truss rod) and uses Taylor's T-Lock joint - like the T5 and the SolidBody guitars. There's a single allen-keyed bolt holding the two parts firmly and precisely together.

Certainly if you're a Taylor player the neck will feel like home. Like all of Taylor's guitars there's a good width, slim but not overly thin in depth, with a flattish radius and a very mainstream 'C'-style profile.

The bound edges lend a slightly square feel to things and, coming from more characterful electrics, you might find it a little bland. But again, you can't fault the craft. Finely polished frets (like on the SolidBody guitars, a slightly bigger size than Taylor's standard) on the ebony 'board, slick playability - it's all here.

As Hosler says, the roller bridge is key to the T3/B's design. It's a Korean-made roller bridge that's rather neat. It sits on two standard (4mm) tune-o-matic thumb-wheel posts and can be locked in place by two grub screws per post, front and back - it's therefore very rigid and won't fall off when you remove all the strings.

The design, by Trevor Wilkinson, actually pre-dates the popular Tone Pros' locking hardware but that's another story. Each saddle has a roller at the break point and each can be manually moved for intonation then firmly locked to the bridge base.

There's also specific geometry involved. The bridge sits quite low and the thumb wheels are recessed into the top. "I'm really big on understanding the break angles at bridge," continues Hosler.

"When we did the SolidBody I spent a lot of time trying to determine the optimum angle that allows the string to stay solidly in the saddle as well as allow it, when you bend a note, to not have any more pressure than it needs to let the string length behind the saddle contribute to the ease of bending.

"Here on the T3/B, we tried to do the same thing. We found too much neck angle [pitch] altered it dramatically. So the combination of the roller bridge and a little flatter neck angle achieved it. I think that contributes to help keeping it in tune."

The pickups (previously used on the SolidBody Standard) pass to a shoulder-mounted three-way toggle and on to a master volume and tone. Nothing new. Pull up the volume knob and you split both pickups simultaneously, voicing the screw coil of the neck pickup and the slug coil of the bridge pickup.

The tone control has a similar duality. Down, the tone control taper gradual rolls off the highs as normal but then, by the end of its travel, focuses on the mids - a bit like pulling back on a wah pedal. Pull the control up and another capacitor is introduced to the circuit giving a different sounding roll-off, to our ears more standard, rolling off a lot of highs and mids by the end of its travel.

The inside electrics are all on a high-tech looking PCB and, like the SolidBody, Taylor says: "We designed a fused string ground (wired to the switch plate inside the guitar), so that in the event of faulty ground or funky wiring, the five-milliamp fuse will fry instead of you."

Neither configuration of the T3 is particularly loud acoustically but both have a more than pleasant, lively resonance. Even unplugged, though, you can hear the slightly lighter, funkier resonance of the Bigbsy-loaded T3/B over the firmer, slightly fuller non-vibrato T3.

Starting off with a clean Fender-style channel both T3s display their sonic intent. It's big, bright and instantly country, rootsy rock and rockabilly all tied up. There's great clarity but not sterility with a little grain - quite Gretsch-like - poking through.

The two pickups are well balanced so the mixed position is typically a little softer, hollowed and textured. The neck pickup balances the spank of the bridge pickup with a silkier voice: not as fruity as an ES-175, more ES-335.

Yet even before we change amp sounds the versatility of the both T3s becomes very evident. Firstly, the coil-splits on the volume control lend, typically, a slightly sharper, lower-output and thinner tonality. Perhaps it's the sheer mass and air of the construction but they don't sound too thin, weedy or spiky.

The tone control is a revelation, especially in its down position where, in mid-travel, it rounds the highs subtly but almost changes the character to an older Gretsch, Rickenbacker or even Tele-like style.

In the upper position you can easily evoke older-style jazz sounds and, to be honest, whenever we came back to the guitar and/or changed amps and tones we heard new things.

The fun continues with some crunch added. The pickups are pokey but far from high output and again the single-coil voices add edge and cut contrasted by the fuller, gutsier delivery of the full coils.

Things get very lively with more gain and some treble roll off helps to control the output but, if you like living on the edge with feedback on tap, and of course that Bigsby, the T3/B performs excellently for Neil Young/Jack White on-the-edge-of-collapse sound.

So what don't we like? Very little. Both T3s deliver exactly what you'd expect from a large semi. There's a slight deadness to the top E string on the T3/B that we didn't hear on the hard-tail T3, which although identical in spec aside from the Bigsby does have a marginally fuller, and thicker delivery - the Bigsby definitely adds a little more airiness to the sound.

There's little to criticise in terms of playability, but switching between various new and old guitars both T3s' necks do, as we've said, feel a little skinny in depth.

While a substantial part of the guitar manufacturing industry still produces instruments often very closely modelled on past glories, Taylor - both with its acoustics and growing electric line - strives to bring new designs and sounds to market.

Taylor's 'acoustic/ electric' T5 was quite a radical concept that not everyone understood. The SolidBody range is much more conventional and now the T3, which stylistically sits between the two, gives us another flavour: a hybrid of both prior designs yet clearly aimed to appeal to the sort of players who'd normally pick up a larger bodied semi, such as a Gretsch or Gibson perhaps.

Yet the T3 has its own character and with less top and back contouring - although still a sizeable beast - it feels less big than those of the classic genre. Sounds-wise too the guitar really impresses if your idea of a semi is those brighter, twangier, lower gain voices. Oh, and the T3/B's Bigsby set-up really works.

Above all it's another bold move for a brand that has its eye on the electric market and is a guitar we'd suggest you audition as soon as you can.